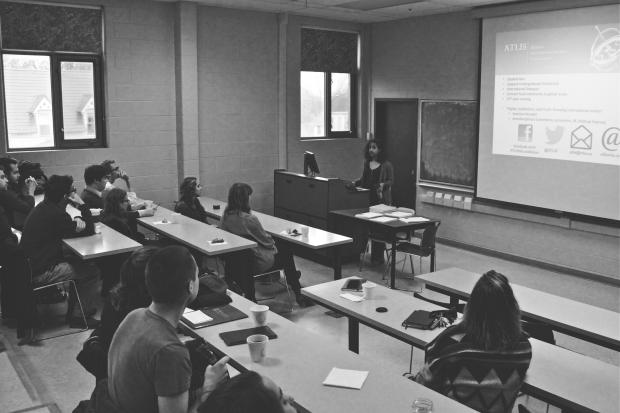 The mini-conference previewed the organization’s plans for the winter semester. These include the release of an undergraduate-written and curated journal, which is now an annual tradition for ATLIS, and a series of undergraduate presentations.

The undergraduate centred approach extends beyond the research that will be featured in ATLIS’s conference and journal. The entire executive consists of Mount Allison students.

“It’s in its twelfth year,” said Mitra. “It has been student run since its conception.”

ATLIS has already put out eight journals of undergraduate work. The focus of this year’s journal and its surrounding conference is “Rights, Institutions and Truth: Pursuing International Justice.”

“It is one of the few opportunities for undergraduates to get published,” said Mitra. “Most journals tend to be post-doctoral.”

Joanna Quinn, associate professor at the University of Western Ontario, is the keynote speaker for the larger conference in the winter semester. Quinn’s research focuses on transitional justice both abroad and in Canada, which is a major theme of the conference. Transitional justice broadly defined is the judicial and non-judicial processes associated with human rights abuses.

Revolution was the theme of the 2011 conference.

The call for submissions will come in either November or December. Any ‘high quality’ paper that has been written can be submitted.

The Nov. 2 mini-conference was a taste of ATLIS’s plans for spring.

The three presentations were all given by current undergraduate students. Brynne Langford’s research considered how the inclusion of organizations representing people with disabilities had affected disability policies. She concluded that their involvement was crucial for positive change. Madeleine Kruth’s research investigated the implications of the label “terrorist” and the dehumanizing effects it can have. Kevin Levangie and Dan Marcotte focused on their summer research on Canadian ties to the Spanish Civil War. Starting with a brief history of the civil war itself, the pair’s presentation also concentrated on their research about the literature of the time. (Editor’s note: Levangie and Marcotte are Argosy staff members.)

The conference drew in a crowd of approximately 35 students and professors from a wide variety of disciplines. They filled more than half of the seats in Avard-Dixon 118, despite horrific weather that continued through the day.