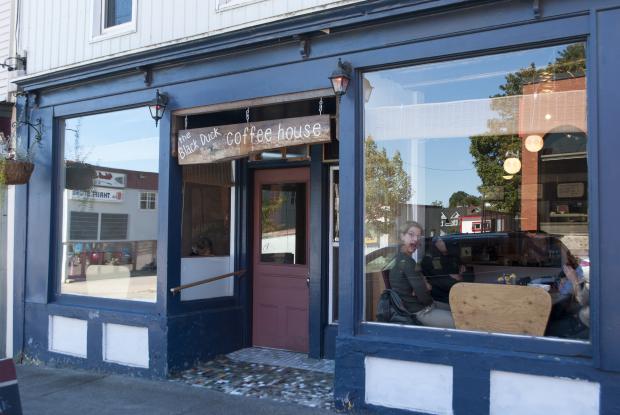 The Black Duck may shut down permanently due to a dispute with the town over a sidewalk patio.

On September 9, the Sackville Town Council voted six to two in favour of revoking the Black Duck’s permit to operate on the sidewalk.  On September 10, a sign on the café door read:

“Dear Friends, on September 9 Sackville Town council voted to revoke the Black Duck’s sidewalk patio. Although this decision has little effect on our day to day operations, we have decided to close and re-evaluate running this business in Sackville.”

The Argosy received an emailed statement from the Black Duck’s address later Tuesday evening. The email accused town staff and all but two members of Sackville’s council of treating the restaurant’s proprietors “like children,” and called for change in what the authors called the town’s “authoritarian and punishing attitude.” A version of the release is available on the Black Duck’s website.

Alan Barbour, co-owner of the Black Duck with Sarah Evans, received the permit in March. According to Barbour, they received a call from the Tantramar Planning District Commission in August, telling them that their patio was noncompliant because they did not have a rope.

Barbour claims to have always run a well-managed patio and kept chairs and tables within the allocated space.

“We had been operating through May, June and July without incident, so the idea seemed to us a little bit heavy-handed,” said Barbour.

“We put the rope out anyway after a number of conversations with the planning commission,” he said, “but they continued to say that we weren’t compliant.”

Lori Bickford, director of the planning commission, addressed the town council on Monday, explaining that the Black Duck received six site visits and numerous conversations were had with the owners. According to Bickford, patio delineation was not compliant during site visits.

Barbour believes the planning commission misread the diagram and thought that the door leading to the apartments upstairs was the front door. The commission had requested that they put a bench under a window that had a table and two chairs, and add a garbage can.

“But as you can see, there’s [a garbage can] right here,” he said, gesturing at the municipal garbage can outside. “Besides, we serve everything on plates and cups, and recycle. We don’t have any garbage.”

Barbour and Evans have been operating their business in Sackville for under a year.

“We’ve had so much red tape and problems that we’re actually considering closing down,” said Barbour. “We work seven days a week and don’t take any time off. We’ve been out of town for four nights in the past two years. We’re now employing seven people, and we had plans to expand and hire something in the order for fourteen to twenty by operating in the evenings and putting in a full kitchen.”

Last week, the owners were notified by email that they would be given a final opportunity for inspection, but planning commissioners were unable to reach a conclusion because the patio was not set up.

“I feel like they were [resisting],” said Michael Tower, one of the councillors in favour of revoking the permit. “They wanted us to change to them. I think there was a little bit of an arrogance involved there.”

Tower said that the Black Duck had not been the only restaurant asked to delineate their sidewalk, and others, such as the nearby Downtown Diner, had done so without hesitation.

“It’s nice to see people on the sidewalk sitting there enjoying it, but I’ve also seen where there’ve been extra people at tables and seniors have had to walk off,” he said.

“I believe this could have been worked out,” said Councillor Evans, “and it’s really unfortunate that it wasn’t. My colleagues didn’t appreciate the distinction I was making. If someone refuses to comply, I would have no problem voting to revoke. I believe they are not refusing to comply, so I cannot vote to revoke them for that reason.”