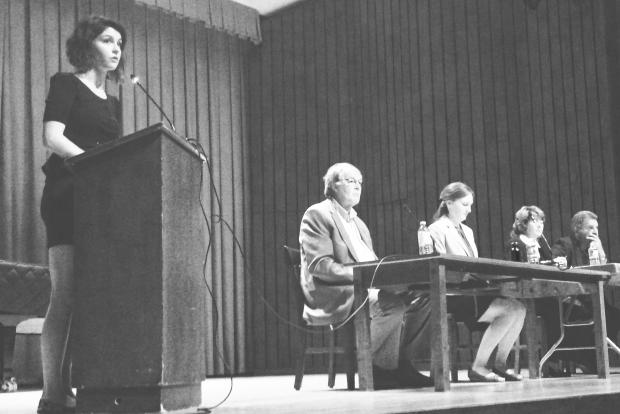 Moderated by Mario Levesque, a professor in Mount Allison’s political science department, candidates of the Memramcook-Tantramar riding presented their parties’ positions on the broad themes of education and social policy, the economy, and the environment to students and community member. Levesque and Annie Sherry, the Mount Allison Students’ Union vice-president for external affairs, chose the themes for their relevance to student concerns.

All four candidates in the riding were in attendance. Mike Olscamp of the Progressive Conservatives, Megan Mitton of the Green Party, Helene Boudreau of the NDP, and Bernard LeBlanc of the Liberals took to the stage to answer questions submitted by the public.

Many of the questions asked that evening were variations on the first question of the education system: “How would the parties help to lower the cost of tuition?”

Olscamp pointed to existing funding in place and said, “Our plan is to continue supporting students to the extent that our financial ability will allow us […] Mount Allison gets $21 million in grants from the province each year, and, not unlike every other university in the province, does not pay property tax, and that amounts to $2 million a year [in savings].”

Boudreau’s education comments focused on the NDP’s debt reduction initiatives. “We’d like to introduce our ‘free in eight’ program so that every graduate can afford to pay their own loan in right years or get help when they need to make those payments,” said Boudreau. Through the program, the provincial government would help students pay off their debt within eight years after graduation. Boudreau also highlighted plans for boosting retention and increased mental health services on campus.

Mitton said that while the long- term goal of the Green Party was free post secondary education, the Greens had a number of short-term goals. “In our platform is to make all provincial student loans interest free, to lower the student loan debt cap to $20,000 from $26,000, and to extend the grace period from six months to a year … And also to remove the parental and spousal contribution for the loan calculation,” said Mitton.

LeBlanc pledged to reverse a change in loan policy made by the current government, as well as freeing tuition for students for the length of their degrees. “We will definitely eliminate the parental and spousal contribution, that is a done deal if we are elected […] We will also be giving stability and predictability in student rates, and requiring the university to set tuition fees for the [four years] of the degree,” said LeBlanc.

No candidate strayed far from their party’s platforms, but the evening allowed for an increased focus on issues of education and environment. It also allowed for the candidates to interact and interrogate each other’s platforms.

The crowd received Mitton’s responses regarding environmental policy, particularly fracking, very well, drawing the largest applause of the evening. LeBlanc’s suggestion that those who think fracking is safe “should have the first well in their backyard” also played well with the crowd.

One of the most striking exchanges of the evening took place between Boudreau and Olscamp after Boudreau outlined the NDP plan to consolidate cabinet positions, cutting them from 17 to 10. The NDP platform says this would save $25 million a year for the province. The proposal, out of character for NDP, was met with skepticism from Olscamp. The defense of the current size of cabinet by the PCs, who have been cutting government spending and size of departments over their last four years in government, also sticks out.

Close to 80 people attended, the majority of whom were non- student members of the Sackville community. Though the event was originally intended for students only, a deal with the Sackville chamber of commerce made it open to the general public.

The sections on education, the environment and the economy each had the same format. The first 10 minutes had each of candidates respond to two to four pre-selected questions, Levesque limiting the replies to 90 seconds. The next 10 minutes opened the debate questions from the floor. Students could also submit questions via Twitter and have them read to the candidates. After that, there was five minutes of open discussion where the candidates could form responses to previous comments made or questions posed by other candidates.

The election is set for Sept. 22. Anyone who has been an official resident of New Brunswick for more than 40 days is eligible to vote.