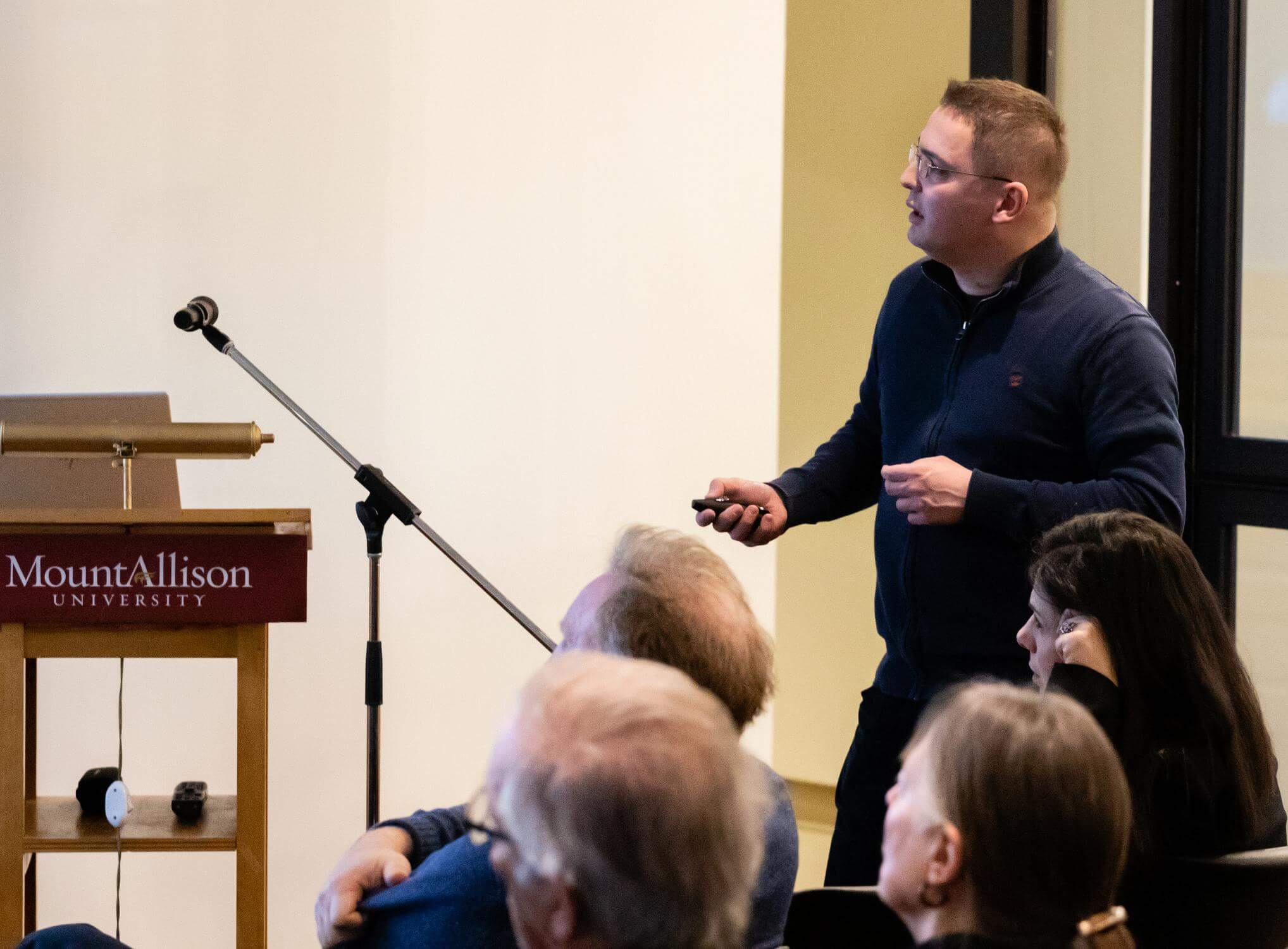 Dr. Ivan Radman-Livaja speaks on lead tags and the population of Siscia

On Wednesday, Feb. 12 and Thursday, Feb. 13, Dr. Ivan Radman-Livaja came to Mount Allison to speak about prehistoric remains found in the Croatian city Siscia and what that reveals about life at that time as part of the 43rd annual Crake Lecture Series.

Radman-Livaja spoke about lead tags, used by craftsmen to sort clothing and other consumer goods, and stone monuments that were found in the old Roman town of Siscia, which is in modern-day Croatia. These tags and monuments have helped researchers learn more about the lives of people who lived in that town.

“Until quite recently it was believed that there were no prehistoric remains here,” said Radman-Livaja. However, after reading some ancient texts by Roman historian Cassius Dio and German geographer Peter Apianus researchers discovered that may not be the case. After some excavation in Siscia they found some remains, although “Siscia doesn’t have that many monuments compared to some other Roman towns,” Radman-Livaja noted.

Radman-Livaja spoke about around 200 ancient stone monuments that were used as gravestones by the people living there at the time. These monuments were typically made by enslaved people or military workers. The graves that the researchers found were mostly of people who were literate. He said that these people could have been police, military workers or people working for the state. It was common for gravestones to be dedicated to the Roman god Jupiter, the king of all gods.

Next, Radman-Livaja showed ancient tags. These were small pieces of lead which craftsmen and tradesmen put on garments after they redyed or cleaned them. These tags were typically reused. According to Radman-Livaja, in order to have a stone monument, one needed to have a lot of money, whereas cleaning or re-dyeing your cloak was more affordable. This means that the researchers could learn about a greater variety of different people from the lead tags than from the monuments. According to Radman-Livaja, “Almost all those tags are names, most likely clients’ names.” In total, researchers have found 300 tags with names of 949 people.

These names provide a lot of information about the people who lived in Siscia around the first and second centuries AD. Different names were more popular in different areas, so the researchers could see where the city’s residents were from. Slaves were typically named after the area they were from, so this helped researchers discover which areas slaves were taken from. “It gives a tremendous and completely new insight into the ethnic and social picture of the city,” said Radman-Livaja.

“I thought the event itself was wonderful, especially for myself going in with no prior knowledge,” said Taylor Hastey, a first-year philosophy student. “[Radman-Livaja] kept everyone engaged in his topic, something I found him to be extremely enthusiastic and very well-informed of.”

The J.E.A. Crake Foundation was founded by former classics professor Dr. John Ernest Alexander Crake in 1983. The foundation supports students in the humanities (specifically classics, music and drama) through scholarships and bursaries. It also holds a fellowship given to a PhD candidate who is expected to finish their doctorate in classics during the time they are teaching at Mt. A. “All these initiatives bring in high-calibre talent to the University and contribute to the life of our town,” said Dr. Ilaria Battiloro, the head of the classics department.

David Wallace-Hare, the current Crake doctoral fellow, will be holding a lecture called Healing the Future with the Past: Replicating and Repurposing Roman Honey on March 2.