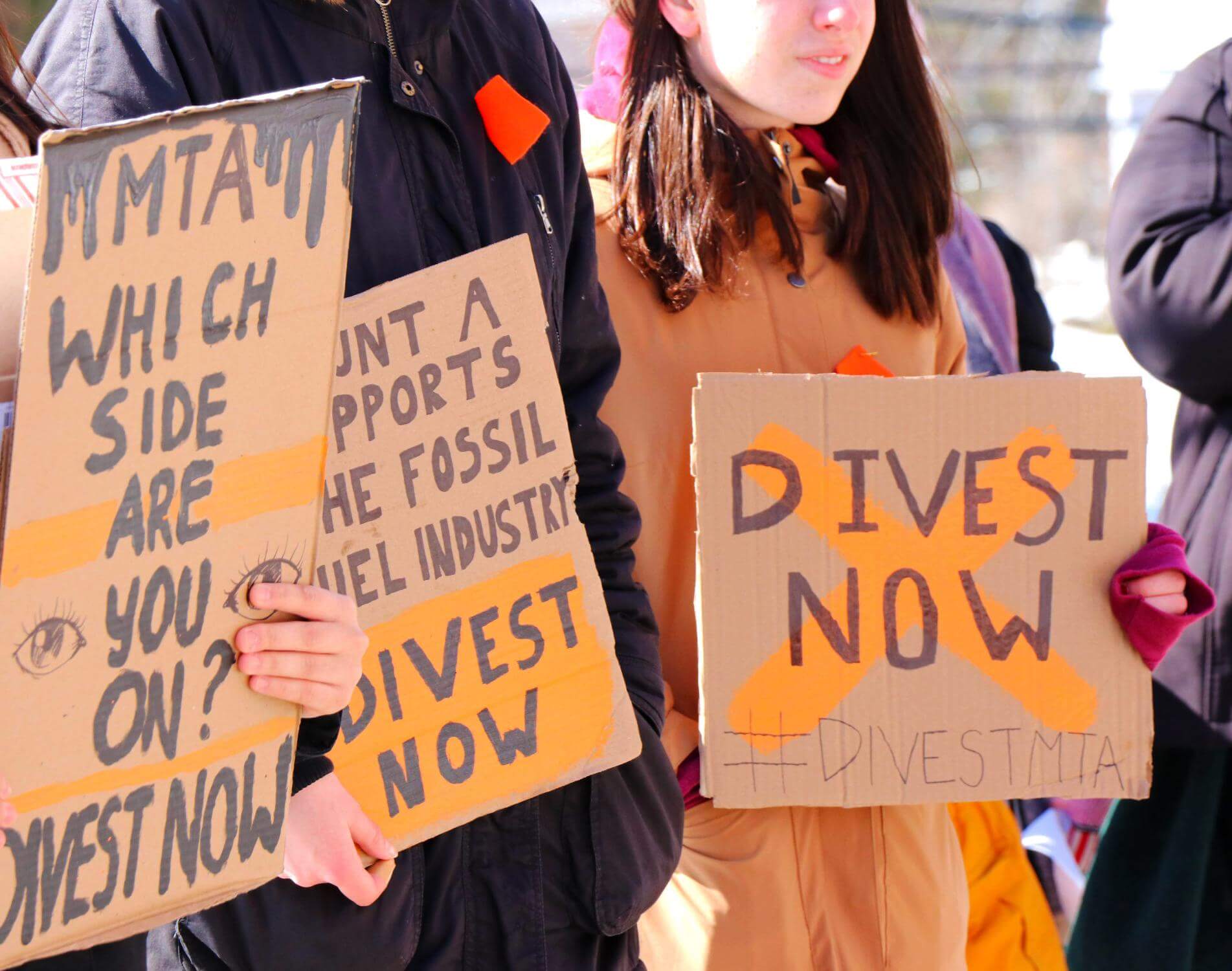 The group of about 30 students began the protest in the academic quad and then marched to Centennial Hall chanting and engaging with students in the area, including prospective students and their parents. Once they arrived outside Centennial Hall, students expressed their demands through speeches.

Julia Connolly, a third-year student, outlined the demands of Divest Mount Allison. “Every time we meet with the administration, we ask for the same thing, and that is to divest from the top 200 publicly traded fossil fuel companies within the next five years. We have been asking that for seven years,” said Connolly. “Today we are also asking Mount Allison to divest from TC Energy and TC PipeLines, which have funded the Coastal GasLink project which is invading sovereign Wet’suwet’en territory. Investment in these companies is not only unethical, but it shouldn’t be tolerated at all in an institution like this.”

The territory Connolly alluded to is the Wet’suwet’en sovereign nation where land defenders are currently protecting their unceded territory against the proposed multi-billion dollar pipeline project. Canadians are protesting across the country in solidarity with the Wet’suwet’en people.

“Mount Allison has close to $8 million invested in the top 200 coal and oil companies,” said Nick Nauss, a first-year student who cross-referenced the top 200 publicly traded fossil fuel companies and the Mt. A endowment fund spreadsheet. “These companies such as ExxonMobil, Chevron [and] Hearst Petroleum have been destroying our planet for decades and Mount Allison is profiting off of it. Mount Allison has been telling us that it is more important for the University to engage with the fossil fuel industry rather than disengagement, which they call divestment.”

First-year student Kate Deroches spoke next. Deroches acknowledged that divestment is a complicated issue, but that it is important that Mt. A works toward it regardless. “We know that it’s complicated, we know that there are systems in place that fundamentally work against sustainability and that reshaping these systems is no small task, but we also know that it doesn’t matter,” said Deroches. “It doesn’t matter how much work this change takes because it is so necessary, so many lives depend on this.” She also stated her belief that “If the systems under which our society operates are designed to take more and more from the Earth with no regard for the consequences, we have no hope of long-term survival of our species.

“If [Mt. A] questions whether or not investing in a livable future is worth all the trouble then I question how much this University actually cares about the futures of its students,” said Deroches.

“Divestment is the beginning to a sustainable future,” said Helen Yao, a second-year student. “It entails shifting our economy and our lifestyle towards a living one, towards one focused on sustainability, not profit.”

In 2017, The Guardian published an article stating that 100 companies have caused 70 per cent of the world’s carbon emissions since 1988. Yao referenced this article in her speech: “Disengagement from an industry that has produced 70 per cent of all human carbon emissions is so important because we believe there is no excuse to continue engaging with the industries that have directly caused human rights crises all around the world,” said Yao.

“We need dramatic and radical change because we only have 10 years to address the climate crisis before we reach a point that we don’t want to think about,” said Yao, referencing the UN’s warning in 2018 that in order to keep global warming from rising to a dangerous point (a maximum temperature increase of 2 C), immediate action must be taken within 12 years.

Mt. A administration did not interact with the students protesting. On March 4, Divest MTA will meet again to hold a walkout in support of the Wet’suwet’en people.