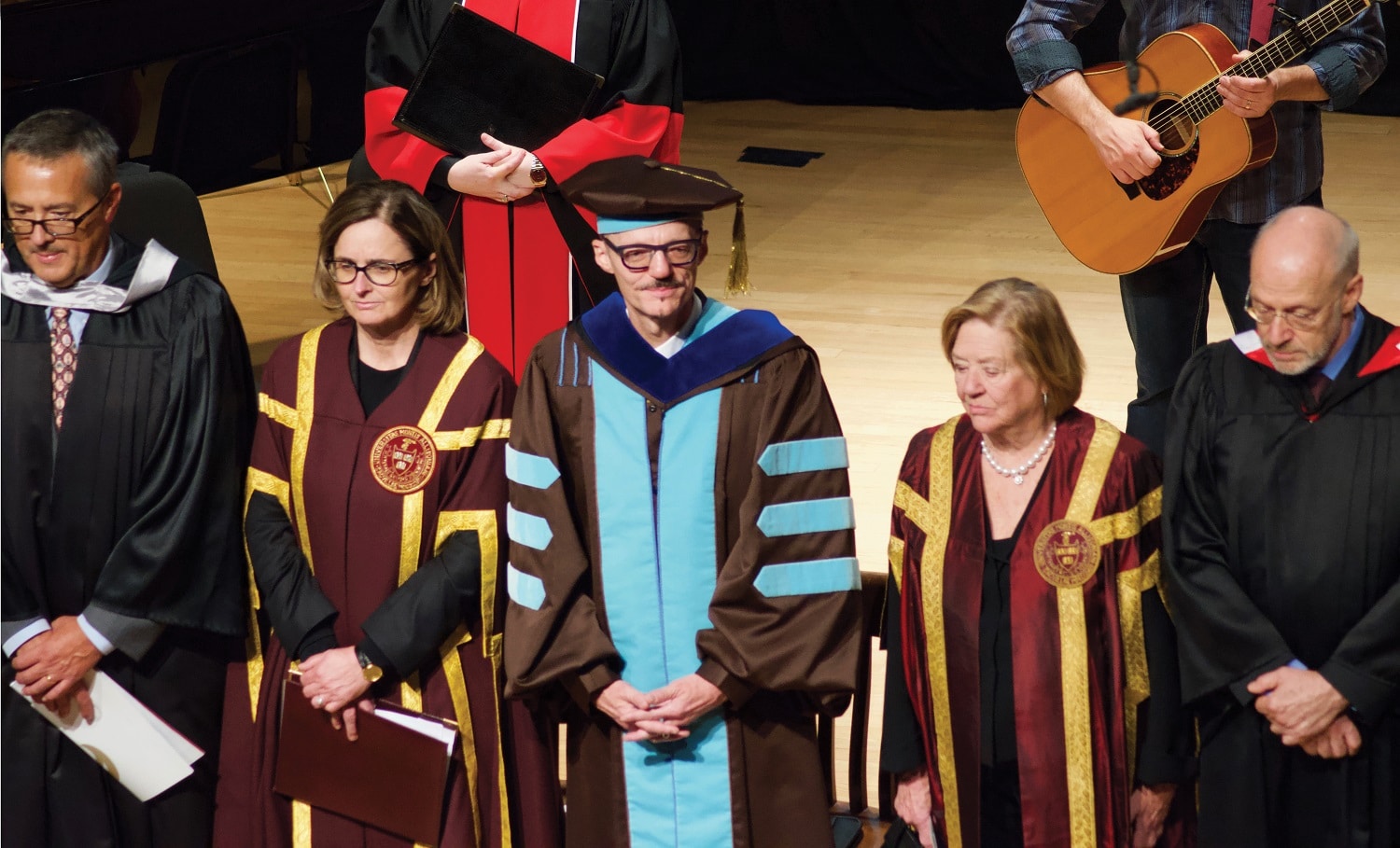 On Friday, Mount Allison held the official installation of their 15th president, Dr. Jean-Paul Boudreau. To formally induct the new president, there was a ceremony held in Brunton Auditorium, followed by an informal kitchen party in the Purdy Crawford Centre for the Arts.

To begin the installation ceremony, university chancellor Lynn Loewen gave remarks on the role of president. “A university president is charged not only with the role of developing and articulating a vision for the university’s future, but also ensuring that vision is achieved. The president must balance competing priorities, ensure diverse points of view are heard and respected, and motivate and encourage the entire community campus,” Loewen said. “This is an enormous responsibility. Dr. Boudreau is proving himself more than equal to the task.”

Donald Boudreau, the incoming president’s brother, spoke about their Acadian heritage and the influence it will have on the president’s approach to his new position. “Qualities of the incoming president will include the independence of spirit, as well as the perseverance and the resilience, that had been characteristic of his ancestors,” said Boudreau. “His approach will also be guided by the following values: a steadfast allegiance to the vision, the mission, the goals and the beliefs of Mount Allison University; an insatiable intellectual curiosity; and an abiding respect for tradition.”

When the president spoke, he opened with a joke: “When you step up to the podium in this role, it’s customary to say something like, ‘I’ve got big shoes to fill.’ But in Mount Allison’s case, we have about 180 years behind us. So, for me, I feel like I have to fill 14 pairs of shoes as I build on what presences have come before me. Luckily, I’m a bit of an expert when it comes to shoes.”

Later, Boudreau spoke on a more serious note, saying, “We have a responsibility to make our communities stronger and more resilient. I challenge this university to become a catalytic incubator for social innovation, doing good, lifting others and building social enterprises.… Indeed, we will have built a sustainable future.”

The issue of sustainability also came up at the kitchen party reception that followed, where Divest MTA organizers asked the new president about his stance on University investment in fossil fuels.

Divest organizer Hanna Longard described the interaction: “We said, ‘Congratulations on being our new president.… You could be the president that helps Mount Allison divest, and that would look really good. We’ll meet with you soon to talk about how to make structural change possible here at Mount Allison, because this [Intergovernmental Panel on Climate Change] report calls for structural change to mitigate climate change.’ He begged us not to bring politics into his family and community space. I can understand that it’s a celebration for him, but for a lot of people there, climate change is an important topic for our community and we cannot compartmentalize family and community from fighting climate change if we’re going to have a future for the community.”

Looking forward, Divest is still hopeful for the chance to work with the new president. “We’ve heard really positive things about him so far from a lot of people – that it is a breath of fresh air and [he has] a focus on community and connecting with people. We hope that he will extend that warmth to having conversations with Divest,” said Longard.

After the installation and kitchen party, members of the Mount Allison community will get the opportunity to see how Boudreau goes about his presidency in the coming years. Boudreau is currently organizing listening tours and pop-up events, which are announced weekly over email.