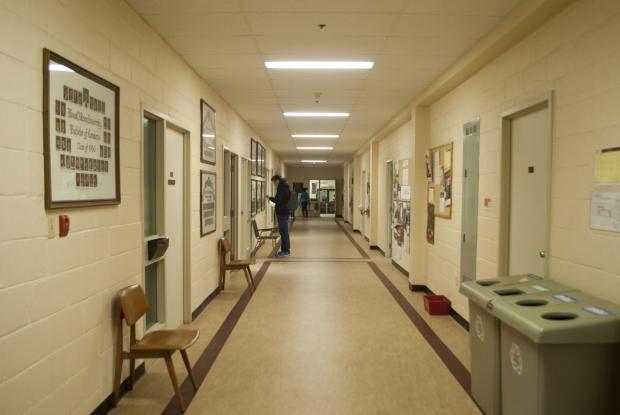 A decline in student enrolment is set to adversely affect students’ union and university finances in the coming year.

As of Oct. 1, Mount Allison University has approximately 180 fewer students enrolled for the academic year. The deficit in enrolment is nearly evenly split between fewer first-year and upper-year students.

The lower enrolment means approximately $1.3 million in lost tuition dollars for Mt. A. Tuition is the university’s primary source of revenue.

“Enrolment affects your government grant, too. However, only twenty-five per cent of the government grant is affected, and the impact is delayed one year and spread out over three.”

“Some of this reduction was anticipated […] approximately fifty per cent of it has to do with fewer new students this year then we had last year, about twenty-five per cent would be because we had a large class that just passed through the system, a class of 829 that graduated last year, and the rest is just comings and goings of people,” Stewart said.

Mount Allison Students’ Union (MASU) Vice-President Finance and Operations Josh Outerbridge outlined the financial effect this decline will have on the union, saying, “Our primary source of income is student fees, so where enrolment numbers are down by about one hundred, and where we collect about $170 per student, it corresponds to a roughly $17,000 decrease in revenues.”

“The demographic in New Brunswick is on a steady decline, and that is certainly part of what is happening. The projections are continuing to be quite abysmal,” he said.

Byrne suggested some of the decline can be attributed to experimenting with recruitment techniques, saying, “It’s important to try new things. You can’t remain static, but I don’t think those things came through in the way we had hoped.” Byrne also said schools of a comparable size in the area had improved their attempts to attract students, claiming, “Our competitors and comparators are increasing [their hold] in the recruiting market.”

Byrne said that Mt. A needs to continue to recruit locally, but look at expansion pragmatically. “While we are primarily recruiting, and continue to look to recruit primarily in the Maritimes, we now have to look west and internationally to find students, because the reality is our population is declining,” he said.

Though fewer students means lower expenditures for MASU, “[The budget] won’t be balanced without significant cuts or some sort of fee increase in my mind. In the past we have budgeted conservatively, but last year’s executive, the budget wasn’t as conservative as its been in the past. The current budget as it stands does have built in cushions, so it shouldn’t be too bad,” Outerbridge said.

Outerbridge said that because of the deficit “there will probably be some sort of fee increase,” but that it would be “nothing too substantial.” Aside from increasing fees, he said, there is little that MASU can do: “Whereas we don’t recruit our own members, we are very much at the mercy of the university and their advertising team.”