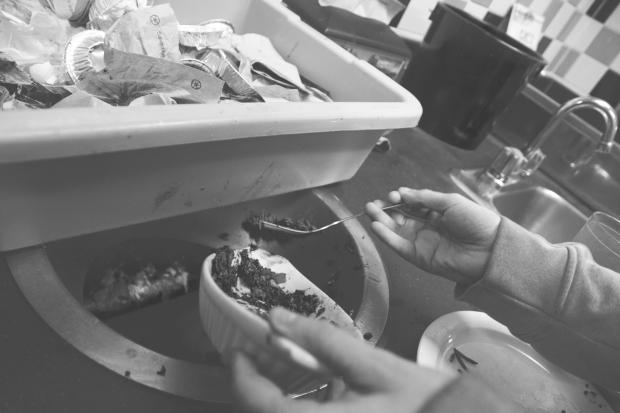 In May 2014, Lauren Latour, a fourth-year environmental studies major, conducted a campus-wide audit to assess the status of Mount Allison’s environmental initiatives. The audit found a consistent reduction in the amount of food waste generated, as well as a general reduction in carbon dioxide emissions, largely due to changes in heating methods. On Oct. 30, Latour presented her findings to a handful of students gathered at The Pond, Mt. A’s campus pub. This year’s audit, “conducted through a series of interviews with Mt.A employees and service professionals, analysis of collated data provided by the University, research of external resources and the practices of outside institutions,” focused on emissions and waste. The findings were analysed and compiled over the course of about four weeks.

According to Latour’s findings, the amount of waste produced at Mt. A has been reduced over the past three years. Initiatives such as Dump and Donate, Big Hanna – the Jennings Hall’s composter – and a soon-to-be installed cardboard shredder were instrumental in the reduction of waste. By almost entirely eliminating food waste coming from Jennings, Big Hanna accounts for an annual reduction of 55 tonnes of waste considered “wet” under the system employed by the Westmorland-Albert Solid Waste Commission.

To put these numbers into perspective, the report, using waste data provided by Facilities Management, states that between 2012 and 2013, approximately 140 tonnes of wet waste and 95 tonnes of dry waste were generated, with another 35 tonnes of ineligible waste being dumped into a landfill.

The amount of “ineligible waste” headed to landfill was partly because of poor waste sorting across campus. It appears Mt. A’s community is either confused by or apathetic about the wet-dry sorting system. Waste that isn’t properly sorted – called a “contaminated” bag – is automatically diverted to landfill. The report calls for a number of initiatives to avoid this problem in the future, such as education on proper sorting and equipping outdoor garbage cans with separate compartments for wet and dry.

“In terms of the audit, a lot of clauses are looking at affecting behavioural and cultural change. One of the best ways to do that is through the [residence] eco-reps, because they have a finger on the pulse of everything in terms of the university,” said Latour.

“[Behavioural change] is hard to accomplish simply with students, because students graduate, and with them leave their initiatives. It would be great to see something come from the administration, faculty and staff level; something that shows that [environmental sustainability] is something the institution really cares about, not just the individuals that make up that institution,” said Latour.

The report also pointed to the ambiguity of the language present in the policy. A recommendation was made to clearly define ‘viable’ means in the case of implementing more environmentally sustainable initiatives. Inglis pointed to U4 League members – universities of similar size and nature as Mount Allison – as potential external benchmarks with which results could be compared to reduce ambiguity.

“Though, we have always tried to then ask ourselves: regardless of what other people are doing, are we doing the best we can?” said Inglis.

Latour noted that most of the changes Mount Allison has implemented in the past have been cost-effective, and not “true acts of altruism.”

With large-scale construction projects on campus, in particular the newly opened Purdy Crawford Centre for the Arts, waste numbers for 2013-2014 are “expected to be unusually high,” according to the report.

Emissions looked at several sub-categories including heating, electricity and transportation. Since 2010, carbon dioxide emissions from heating have been reduced by 2000 metric tonnes, falling from 7000 to 5000 metric tonnes. This reduction can largely be attributed to a conversion from using “Bunker A” fuel oil to burning natural gas in the heating plant in 2010.

Electricity used on campus continues to be purchased from the grid run by NB Power. Accordingly, it is difficult to determine how environmentally friendly the electricity is.  For Mt. A to produce its own green energy remains a costly, time consuming proposal that the institution has not yet been willing to undertake.

The report also considered travel. Employee travel accounted for 72 per cent of the emissions, field trips for 21 per cent, Facilities Management’s fleet for 5 per cent and sports teams travel for 2 per cent.  Yet, the bulk of these emissions were produced during travel within North America. Behavioural change, such as encouraging individuals to use lower carbon-emitting forms of transportation, was recommended in the report.

In 2013, the auditing process was modified in favour of a long-term process, through which two to three out of the eight sub-policies are reviewed each year. In practice, this means that a full audit is completed every four years.

“There are pros and cons to both,” Latour said of the two methods of auditing. “The good thing about [the current process] is I was able to focus and give all my attention to those two policies. I was really able to narrow it down and not worry about different aspects of the environmental policy,” said Latour. For the auditor to be able to focus on a smaller number of topics could help reduce the overlap in findings between sub-policies.

To replace the current process, Latour proposed to hire four students every other year, with each student being assigned to two policies. This would provide the university with a completed report every two years.