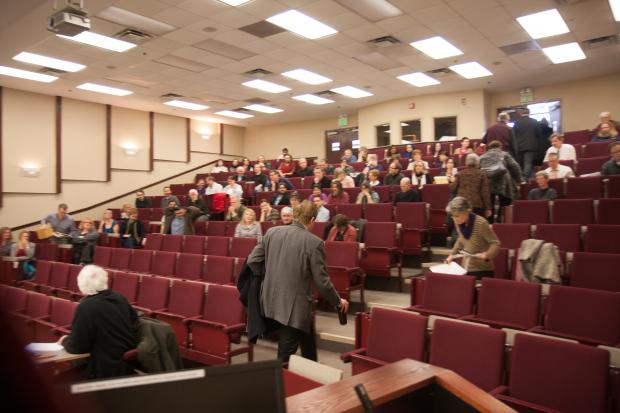 “We’ve given [President] Robert [Campbell] a pass for many, many years,” said Mike Fox, addressing an assembly of his colleagues this afternoon. Half an hour later, the group would vote sixty to one declaring non-confidence in Mt. A’s administration.

Today’s faculty council meeting took a dramatic turn when Campbell, the body’s chair, adjourned the meeting over the protests of the assembled faculty. Campbell and the administrators present marched out of the Wu auditorium, less than half an hour after the meeting was called to order. The only administrator to remain was Jeff Ollerhead, a dean.

A motion of non-confidence was on the meeting’s agenda, which Campbell ruled out of order before the motion was read or discussed. Campbell said that faculty council did not have a mandate to evaluate matters of performance. He added that the motion “border[ed] on the defamatory.” His commentary prompted several challenges from faculty and shouting from the floor.

As the administrators walked out, faculty stayed in their seats in protest, insisting they would vote anyway.

Of those present, sixty voted to affirm the motion to advise Mount Allison’s Senate that faculty have “no confidence in the current President and Provost as the academic leaders of our community.” Voting was done by anonymous ballot with independent observer from the community on hand to count the results.

Prior to the vote, several faculty members aired grievances about a perceived lack of transparency and accountability from administrators. Campbell and Provost Karen Grant were the targets of most of the criticism. The absent administrators were also accused of undermining collegial governance processes.

Andrew Irwin, who brought forward the motion, said this vote was intended to send a message to the administration.

“I have concerns about things that have been happening at the university over the last two years, and I’ve heard many of my colleagues express similar concerns,” Irwin said.  “I thought it [would be] useful to have a formal statement from the faculty.”

“We were hoping that the president and the provost, through our faculty council, would perhaps sit back and listen to our concerns,” said Fox, who seconded the motion. “That’s the key message.”

“This [is] our only opportunity to get together as a faculty and make a clear plea to be consulted,” Fox said.

“I’m not pleased with a chair of a committee picking and choosing which rules to follow. [Campbell] decided to leave; we didn’t,” Fox said. “The administration’s role is to support the mission of the university, we’re not going anywhere.”

“[Faculty council] is where input is supposedly solicited, that’s not going to change,” he added.

The administration would not comment on the results of the vote. “The faculty council meeting was adjourned, so whatever happened was not done by the faculty council,” university vice-president David Stewart told The Argosy.

“The chair has a responsibility to ensure that votes are not put to faculty council that attack the standing and reputation of members of the faculty council,” Stewart said.

“We had hoped that the meeting would have arrived at a path forward that would have been constructive, that would have allowed the faculty council to deal with the concerns that they may have had in a way that was consistent with the jurisdiction of the council and its proper functioning,” said Stewart, adding that Campbell had no choice but to declare the motion out of order.

While faculty insist the motion was not simply about the strike, Stewart maintained that the council could not address issues that are still outstanding in binding arbitration. Arbitration to settle the terms of a collective agreement between faculty and Mt. A will not conclude for months.

Before adjourning the meeting Campbell said that he would be willing to reconsider discussion at a future council meeting if undertaken in a “collegial” rather than “adversarial” manner, and if the agenda item was “properly formulated,” and did not deal with issues that were the subject of arbitration.

Before the vote, the assembled faculty wondered about how to include faculty who were not present at the meeting. They agreed to hold the vote with those present, and consider alternative arrangements for absent members in the near future. Nearly 150 faculty, librarians, and archivists missed the vote.

Approximately half a dozen students were present for the meeting, including MASU President Melissa O’Rourke and Vice-President Academic Affairs Ryan Harley.

“It is disheartening to watch two parties integral to our community and experience disagree so substantively on what is best for the university,” Harley wrote in an email to The Argosy, but added that he was “thrilled to see the faculty brainstorming concrete strategies on how to move forward.”

Harley stated that he felt neither party wants “anything but the best” for the university.

Faculty council is a governance body with a mandate to advise the university’s senate. All faculty teaching one full course or more are members of the council, but a turnout this large is not typical of faculty council meetings. The meeting was originally scheduled for the library theatre, but was quickly relocated to the Wu after the room filled.

The repercussions of today’s vote will become clearer at the next scheduled meeting of the university’s Senate on May 8.

FULL TEXT OF MOTION BELOW:

Whereas Mount Allison’s senior academic administration, under the leadership of President Robert Campbell and Provost and Vice-President Academic and Research Karen Grant, have demonstrated a lack of transparency in decision-making, disregard for collegiality and academic principles, and a lack of respect for faculty and librarians,

And whereas there has been a failure to prioritize and support the academic mission of the university and integrity of academic programs, specifically by not providing adequate replacements for leaves and departures,

Be it resolved that the academic staff of Mount Allison, as represented by Faculty Council, advises Senate that they have no confidence in the current President and Provost as the academic leaders of our community.