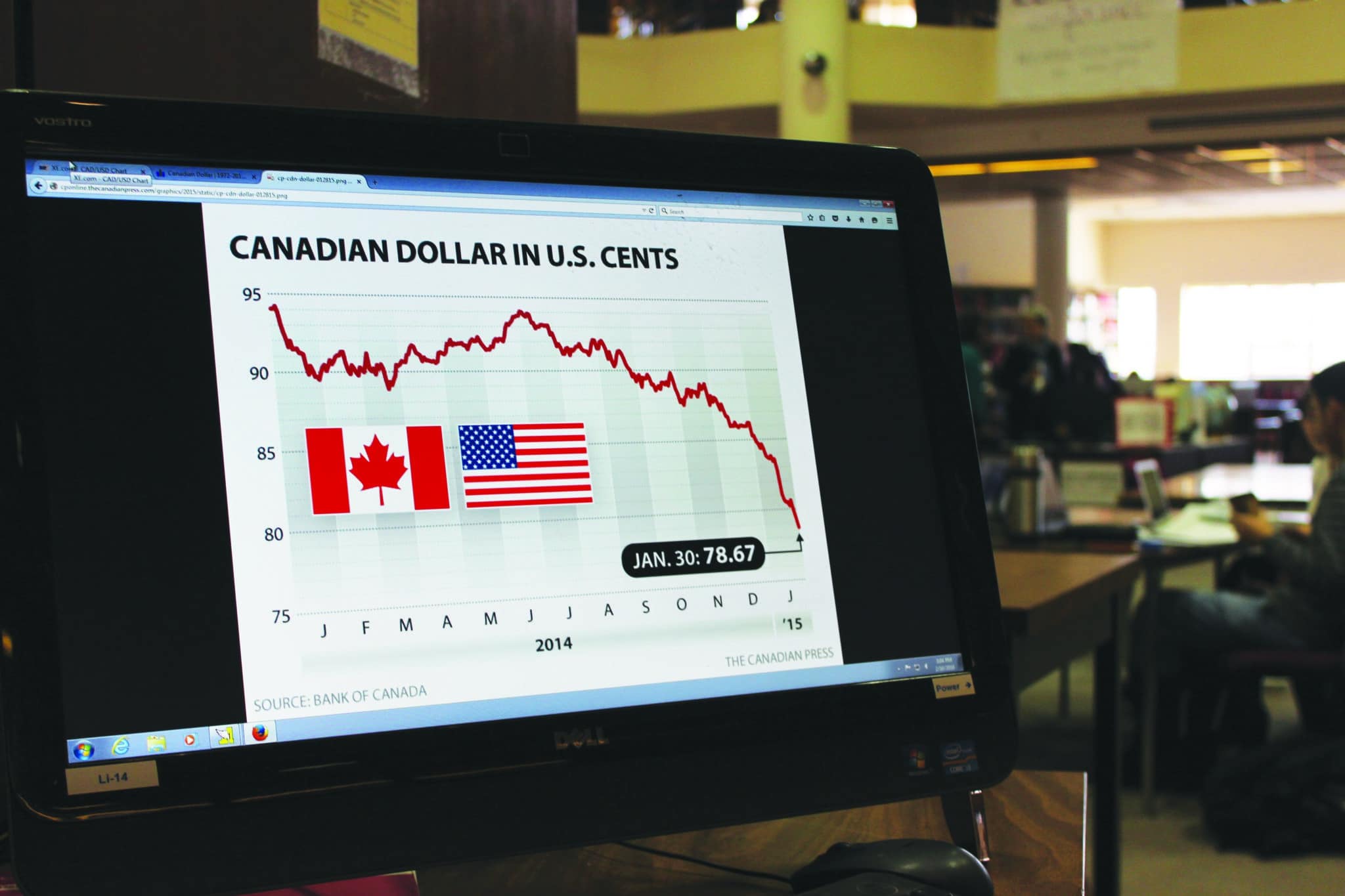 Since July 2014, the Canadian dollar (CAD) has precipitously fallen in value against the United States dollar (USD) and is currently valued at around $0.70 USD. This has forced both the computer services department (CSD) and the Mt. A libraries to pay hundreds of thousands of dollars more for American products, which they both rely on extensively.

According to the CSD director Helmut Becker, a majority of the software used by the university is licensed from Ellucian, an American company based in Virginia. In last year’s budget, the CSD spent about $460,000 on software maintenance and licensing renewals, $400,000 of which was spent exclusively on Ellucian software. Becker said he increased this figure about 30 per cent – over $100,000 – from the previous year’s budget in order to compensate for the falling CAD. Ellucian software is used in the university’s financial services and human resources offices, as well by the registrar’s office to run their recruitment software. Connect and the university’s payroll are also powered by Ellucian software.

“These companies know they have us by the throat – they can up the price…they add new modules now and newer technology and they’re going to charge us to implement that,” said Becker. “Capitalism at its worst, right?” he added.

“If we spent [all our budget] on stuff that was of non-Canadian origin, then every time the loonie drops one penny against the dollar it means our buying power decreases another $8,000,” said Truitt. “Just in the last two or three months, the loonie’s gone down another dime against the [American] dollar, so that’s $80,000. That’s definitely not trivial.”

“We’re not flushed with cash here living the good life”

The library’s subscriptions to American publishers Wiley and Springer, two of the most extensively used journal subscriptions on campus, have together increased in annual cost by more than $34,000 since the CAD began its recent decline. Most journals can be purchased only in subscription bundles with many other journals, which Truitt said is part of the reason these subscriptions are so expensive.

“What it means is you’re paying for very few journals that you’re using and whole bunch you’re not using at all,” said Truitt.

The rising exchange rate has exacerbated budgetary restrictions faced by the CSD and library. The operating budget for the library’s acquisition – the portion of the total acquisition budget provided by the university budget and not through endowments – dropped by $50,000 in the 2015-16 budget, from $542,000 to $492,000. The library had to cut back on many journal subscription packages and was unable to buy as many printed books to the detriment of disciplines like history and English, which both rely heavily on monographic writings.

Becker said the rising price of software maintenance is taking up higher percentages of the CSD’s budget, which has not increased to meet demands in other areas. CSD staff are no longer allowed to work on overtime pay and must take off the equivalent number of hours they work overtime at a later time, and the budget has not risen to keep up with the rise in wages for minimum-wage student employees. Becker said the CSD has had an annual $1,000 office supplies budget for the last 30 years, which has not been adjusted for inflation.

Both Becker and Truitt said the only way they see their budgetary situation improve is through increased funding and for the exchange rate to return to parity. Open-source software and open-access journals are free alternatives to the American-sourced products the CSD and library use, however they are unlikely to compensate for the low CAD. Becker said that while open-source software for university administration is being developed, no option exists that is sufficient for Mt. A’s needs. Moodle, an open-source software program used on campus, is an exception.

“Moodle may not be the most advanced and modern [open-source software], but it does the job we need to do and most faculty are fine with it,” said Becker. “We’re not flushed with cash sitting here living the good life. We are trying the best we can to provide services to students at the lowest possible cost.”

“I think [open-access] hasn’t helped in the sense of drawing traffic away from the paid commercial publications,” said Truitt. “It’s made the pie bigger instead of changing the relative sizes of the pieces of the same old pie.”