Gender-neutral Washrooms At Mt. A? 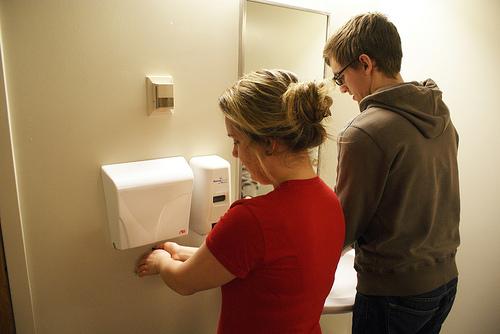 The Mount Allison Students’ Union (MASU) will lobby Mount Allison University administration to supply gender-neutral washrooms on campus. The MASU Students’ Administrative Council (SAC) voted February 13 to request that Mt. A pay the costs associated with refitting all single-stall washrooms on campus in the Student Union’s budget submission to the university for the next fiscal year. In the meantime, MASU Vice-President, Campus Life Nikki Bhatia is conducting meetings with Mt. A administration in an effort to assess the costs associated with such a project and convince the university that gender-neutral washrooms would improve students’ quality of life. According to Bhatia, converting single-stall washrooms to gender-neutral washrooms means putting locks on the doors and changing the signage to reflect availability for use by all individuals, regardless of their gender identity.

At the January 23 SAC meeting, Bhatia reported that she and the Campus Life Committee were drafting a report to present to the Mt. A administration on gender-neutral washrooms. The report would include the findings of a recent MASU survey on the subject, where students indicated that they would use single stall, gender-neutral washrooms, should they become available, with 265 students responding in favour and 56 against. The report would also include data on the costs of the materials and labour required to refit between ten to fifteen washrooms for use by people, regardless of gender. The Campus Life Committee has identified only one publicly-accessible gender-neutral washroom at Mt. A.

At the February 13 meeting, the SAC voted unanimously in favour of a motion put forward by MASU President Pat Joyce that included asking the university to include the costs of refitting the washrooms in its budget for the 2013-2014 fiscal year. Bhatia hoped that Mt. A would commit to funding the washroom refits by mid-March.

Administrator responses to the possibility of renovations varied: in an email, Student Life Director Gayle Churchill said that “as far as Student Life is concerned, gender-neutral washrooms work for a variety of reasons, and if existing washrooms can be easily converted, it is a good move,” while Facilities Management Director Rob McCormack told The Argosy that he had not previously been aware of the issue.

In an interview, Bhatia said that the lack of gender-neutral washrooms on the Mt. A campus is principally a branding issue: the major change that MASU seeks is the replacement of the signage on washroom doors that state who can and cannot use specific facilities. However, she also said that it is also a matter of accessibility and safety for non-cisgender students at the university (cisgender is a term denoting a person whose biological sex and gender identity match). “It is a branding thing: yes, gender-neutral is great, because we do have transgender students on campus, and everybody deserves to feel safe while they are doing their bodily functions that they have no control over, but at the same time, it is an accessibility issue at this point,” Bhatia told The Argosy. President of Catalyst, Mt. A’s LGBTTQ-straight alliance, Kate Phillips agreed, stating, “the [gender-neutral washrooms] here are few and far between, and rarely accessible. It is enough to make a lot of people feel very marginalized.”

MASU’s drive to get gender-neutral washrooms this year originated with SAC Councillor Katie Clarke. In an email to The Argosy, Clarke wrote that the idea to push for the changes came from a conversation with a constituent, who told her that Mt. A’s gender-neutral washroom in the Library was often locked, and therefore, unavailable. “This was a problem, because it was making students who didn’t feel comfortable identifying with a gender choose, publicly,” Clarke said.