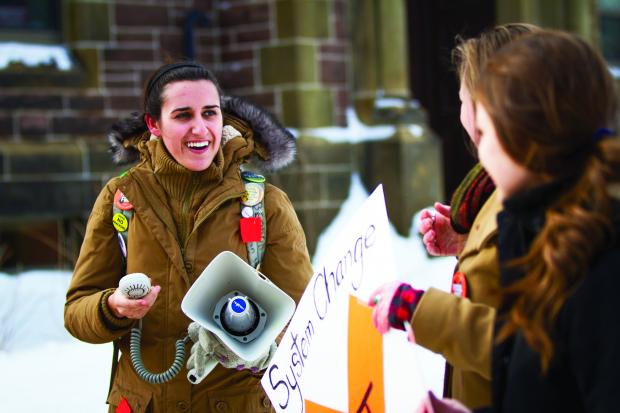 Divest MTA participated in Global Divestment Day for the second year in a row. The initiative aims to pressure institutions to remove their investments from the fossil fuel industry. Divest MTA organized initiatives to foster support, build awareness and send a clear message to the university that they want to make fossil fuel divestment a reality at Mount Allison.

Last year, the bulk of the initiatives focused on building awareness around the issue, said one of Divest MTA’s co-ordinators, Emma Jackson.

“This year we’ve made really significant progress so I think for us, we’re moving beyond this awareness stage of our campaign,” said Jackson. “We are willing and wanting to collaborate and to work with the Board of Regents to make this a reality.”

This was reflected in the rally which took place on Feb. 13 in front of Centennial Hall, which houses most of the administration’s offices. A group of approximately 25 students and community members regrouped to engage in chants, pressuring the university to divest. “This year we’ve made really significant progress so I think for us, we’re moving beyond this awareness stage of our campaign,” said Jackson. “We are willing and wanting to collaborate and to work with the Board of Regents to make this a reality.”

The rally that took place on Feb. 13 in front of Centennial Hall, which houses most of the administration’s offices, reflected this. A group of approximately 35 students and community members gathered to engage in chants.

“The objective there isn’t to be angry or in any way sort of antagonistic,” said Jackson. “It really is just to show that students are supporting this and that there are students on the ground that want to see it happen.”

While the rally was at the core of Global Divestment Day’s events, the organizers still planned some awareness initiatives. Members of Divest MTA also handed out orange squares and stickers showing support for the divest movement.

“We’re pretty pleased with how everything went. It was short, it was sweet, it was wonderful to see so many people out. So much positive energy and support around campus was really, really wonderful,” said Divest MTA co-coordinator Lauren Latour.

As the rally was taking place, Jackson and Latour brought a report to Mt. A President Robert Campbell and Vice-President Finance and Administration Robert Inglis, presenting both ethical and financial arguments for divestment. The report was drafted by a committee of seven students involved with Divest MTA.

The report will be forwarded to the investment committee, said Inglis. The committee oversees Mt. A’s endowment and pension funds. Inglis said it is the committee’s responsibility to ensure the university’s funds are invested in a profitable way.

“Any investment committee, including Mount Allison, is a fiduciary or a trustee and has fiduciary responsibility towards the funds under their purview,” said Inglis.

Campbell and Inglis were receptive to the ideas brought forward by Divest MTA’s co-ordinators, said Latour.

“When I think of divestment, I think of the question ‘Can you do it?’ as opposed to ‘Should you do it?’ Those are two different questions that the investment committee will have to consider,” said Inglis.

But even as much progress has been made, those asking institutions to divest still face significant barriers.

“It’s not only a moral and ethical responsibility, it is a financial and fiduciary one as well,” said Latour. “But that’s a hard argument to have with people who potentially have close ties with fossil fuels, or are accountants themselves. It’s hard to argue that we’re by no means the experts, but that we have information that they maybe don’t have.”

A rally calling upon the university to divest for fossil fuels was the first of its kind to happen at Mt. A. Orange squares are becoming increasingly visible and for the occasion, orange X’s were drawn on snowbanks throughout campus.

The Mount Allison Faculty Association recently passed a motion to support Divest MTA in their efforts to lobby the university to divest from fossil fuels. The motion also instructed the pension committee to launch a discussion regarding a potential option to divest in MAFA members’ investment portfolios.

“[Divestment] is symbolic and it’s a question of at the very least to remove your own complicity from the activities,” said international relations professor Dave Thomas. “It’s a way to build a movement of people who have this, at the core, this idea that we are uncomfortable paying for and profiting from a particular set of activities.”

“If the goal is to actually change the way Mount Allison does things, the core challenge will be convincing the Board of Regents and the upper administration that it’s a good idea, or that it’s necessary,” said Thomas. “Even to acknowledge that maybe this is something the university should think about I think would be a success.”