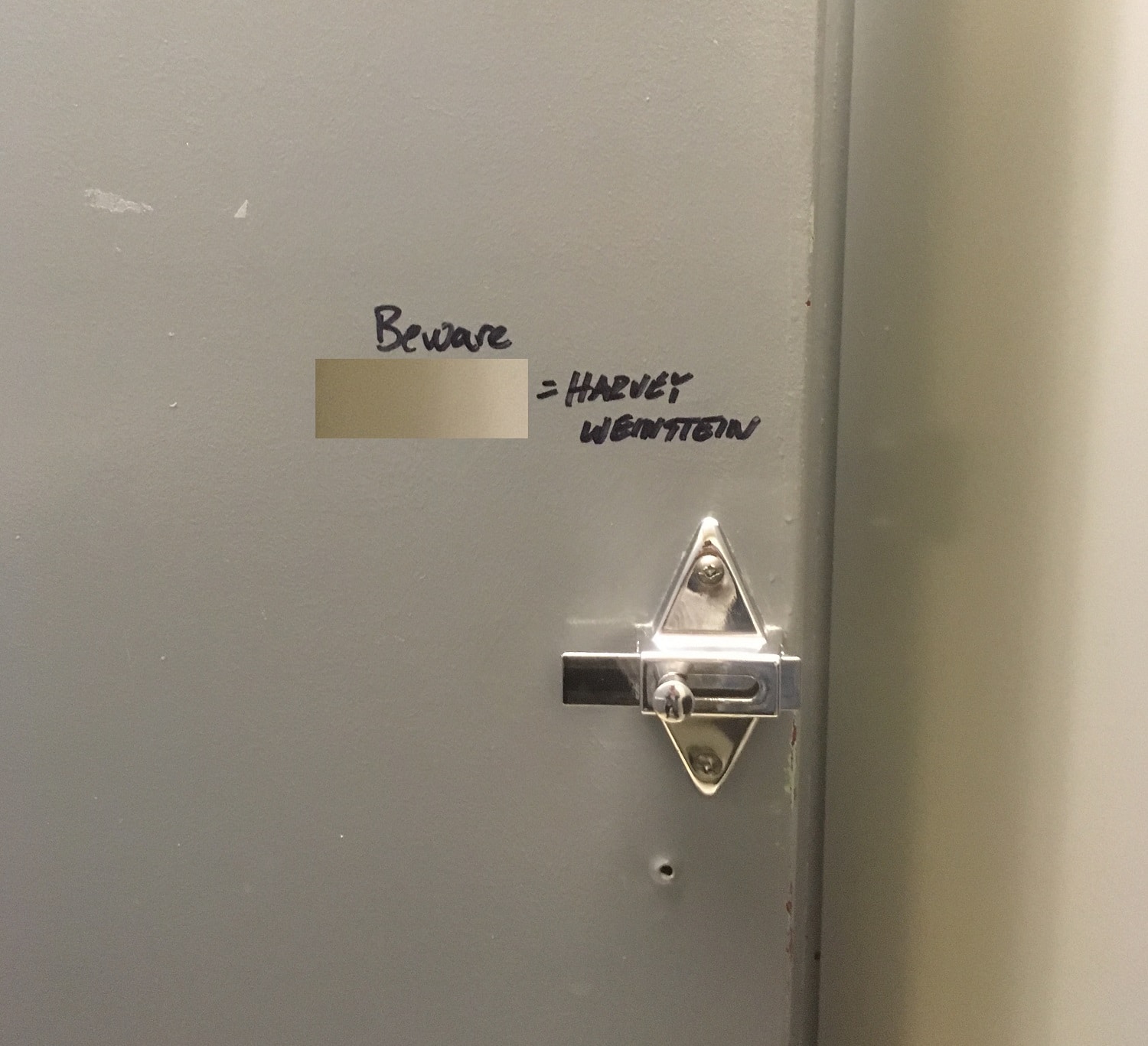 University aware of graffiti, says, “No disclosure of sexual misconduct has been reported by a survivor,” but that they are monitoring the situation

In August of this year, someone wrote a former Mount Allison professor’s name on a bathroom wall with the implication that he was equivalent to Harvey Weinstein – the major film producer who has been accused of sexual assault by over 80 women. The allegations against Weinstein and the resulting New York Times article exposed decades of cover-ups from within Hollywood and Weinstein’s inner circle, sparking the #MeToo movement and a chain of investigations into sexual abuse allegations in the entertainment industry.

The graffiti, which read, “Beware: [former professor’s name] = Harvey Weinstein,” was written in a bathroom in the R.P. Bell Library.

On Aug. 16, an individual who wishes to remain anonymous due to legal concerns created the @metoomta Instagram account and posted a photo of the graffiti. The caption clarified that the account’s owner was not the author of the graffiti and that they could not say exactly what the graffiti meant, but that “Exact details are not necessary. This clearly implies that the professor in question has abused their position of power. This is Mt. A’s Me Too moment.”

The photo of the graffiti posted by this account did not show the former professor’s name. The owner of the account cited “legal reasons,” not the protection of the accused, as their motivation for doing so.

For this same reason, the Argosy cannot publish the name of the former professor. Defamation law also prevents us from publishing any details that could imply their identity. This law is intended to protect individual reputations from being sullied by unjustified allegations or criticism. The Argosy does not currently have sufficient corroboration to support the claim implied in the graffiti that we could present in a court of law.

The instagram account currently has 104 followers. @Metoomta noted that the direct responses to the account had been “extremely positive” with “many DMs of support” and others sharing the posts on their own social media.

On Aug. 18, @metoomta published a screenshot of a text message conversation wherein the account owner tells a former student about the graffiti. The student, who noted that they had a class with the professor in 1988, responds, “I do remember rumours that he was dating one of his honours students. Probably a 15-year age gap at the time.”

The Argosy interviewed the owner of @metoomta through Instagram direct message to accommodate their request for anonymity. When asked what led them to use Instagram as a reaction to the graffiti, they said, “I wanted this documented publicly before I reported it to the school because I knew it was likely it would be covered up.”

@Metoomta said that on Aug. 17 the graffiti was reported to Kim Meade, VP international and student affairs. They also noted that “[at] this point, someone else had already reported the graffiti through a different channel” and the graffiti had been covered up.

They also said that they had previously heard rumours about this professor and their “dubious affairs,” but did not have any sources who were willing to speak to the Argosy. They went on to say they believe that “Ultimately it doesn’t matter who wrote it or what exactly happened if we just believe survivors.”

On Oct. 8, @metoomta published a new photo of the same message, rewritten in another library bathroom. On Oct. 9, the Argosy found the graffiti written in two female-designated bathrooms in the library. This graffiti has since been removed.

On Oct. 8, the Argosy contacted Laura Dillman Ripley, Mt. A’s media relations officer, to request interviews with Meade and SHARE advisor Melody Petlock about the graffiti, the reports and the University’s process for handling allegations of sexual misconduct. The Argosy also wrote that we would be “receptive to including a formal statement from admin in the potential article.” Interviews between university administrators and the media are always arranged through Dillman Ripley.

The next day, Dillman Ripley asked the Argosy for their list of interview questions, writing, “Given the sensitive nature of the topic, we want to ensure we have a complete understanding of your questions and provide you with the information needed.” The Argosy gave her a list of questions that afternoon. Dillman Ripley replied that she would “follow up with [the Argosy] later in the week.”

The week following, on Oct. 15, the Argosy sent Dillman Ripley a prompting email asking if the University would be able to follow through on an interview or give a statement that week.

Dillman Ripley replied the next day with no mention of the interviews originally requested: “Thanks for your note. It’s a busy week with the President’s Installation on Friday and Farah Mohamed’s upcoming talk on the 22nd. We will have a response to you before your deadline this Sunday.” The Argosy responded with, “Just to confirm – you won’t be able to schedule me an interview with Melody Petlock or Kim Meade? If I waited a week would there be time for interviews or is there an enduring issue beyond time?”

On Friday, Oct. 19, Dillman Ripley wrote, “Thanks for your note. Attached is a statement from the University as requested, as well as some background information for your story. SHARE advisor Melody Petlock is available for an interview next week. Let me know your class schedule and timeline and we’ll work to set something up.” No mention was made of the requested interview with Meade.

This is the statement Dillman Ripley sent the Argosy on behalf of the University:

“When the University becomes aware of a concern (through social media, print or verbal reports) it is always taken seriously.

“In August, the University became aware of graffiti on campus that mentioned a former faculty member.

“We began to monitor the situation and gather information with the support of the SHARE office. We noticed the graffiti returned at the beginning of the fall term, at which time we also received reports from individuals who told us that they had also seen the graffiti around campus.

“We encourage members of the Mount Allison community to come forward to disclose if they observe something that raises concern, to seek support, and/or consider the options for complaints to be addressed.

With respect to reports about this situation, no disclosure of sexual misconduct has been reported by a survivor, nor have we received a complaint under the sexual violence prevention policy. Individuals can contact Mount Allison’s SHARE office, [email protected], call/text (506) 540-7427.

“We are continuing to monitor the situation and gather information.”

The University included a “background information” section in their statement, highlighting the following three sections of Mt. A’s Sexual Violence Prevention and Response Policy: that it “applies to all members of the Mount Allison community, has clear processes for responding to disclosures from survivors and addressing informal and formal complaints, and upholds confidentiality, which is a key principle in creating an environment where survivors feel safe to disclose and seek support and accommodation.” The policy is administered by Meade and is available on the University’s website.

Other sections of the policy relevant to the response to the allegations in the graffiti include the scope of their policy – “This policy applies to all members of the Mount Allison community. The interpretation and application of this policy is the responsibility of the Vice-President International and Student Affairs or delegate for student issues and the Vice-President Finance and Administration or delegate for employee issues” – as well as the limitations of the policy – “Normally, complaints may be accepted up to a year after an incident, recognizing that it is the nature of sexual violence that a survivor may take much longer to feel safe or ready to disclose.”

No Canadian university has official policy banning sexual relationships between professors and students. Mt. A does have a policy on workplace harassment. That policy, approved in 2011, is only applicable to “employees of Mount Allison University” and “relates to their interactions with other employees in the workplace.” Though the policy does cite abuse of authority as a form of workplace harassment, it clarifies that “In the case of sexual harassment, the University’s separate policy and procedures governing sexual harassment, rather than this Workplace Harassment Policy, will apply.” Online, there is a link provided to that harassment policy. The link fails, because in 2016 the University’s sexual harassment policy was replaced by the aforementioned Sexual Violence Prevention and Response Policy. Appendix 1 of that policy, “Principle of Consent,” states, “Consent cannot be obtained if one party abuses a position of power, trust or authority.

If you have information pertaining to this article that you would like to share with the Argosy, anonymously or otherwise, please contact us at [email protected]