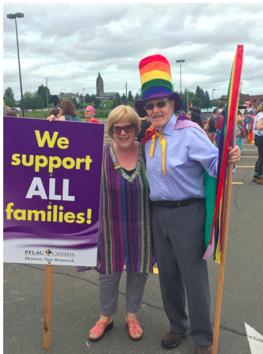 Looking ahead and remembering the legacy of PFLAG in Sackville

This summer, Sackville community member Dawne Boorne opened a PFLAG chapter in town. PFLAG, which originally stood for Parents and Friends of Gays And Lesbians, is a support, education and advocacy group for members of the queer community as well as their family and friends.

Boorne established the new PFLAG Canada chapter in Sackville this past summer because she was looking for a supportive group of people to share her story with.

“When I started thinking about this, struggling with my identity as a bisexual woman, I couldn’t find any help, so I made one,” said Boorne. “We meet every first Thursday of the month from 7 to 9 at my yoga studio at 42 Main St. We’ve had two meetings so far.… I’m there when people need me. And if they don’t, then that’s great.”

For the time being, the chapter mostly exists as a support group, explained Boorne, but they would like to expand. “When there’s enough money I’ll be able to pay guest speakers and stuff, but haven’t done that yet,” she said. “It’s really just in its very beginnings. We just started on June 26.”

PFLAG Sackville also hosts queer movie nights at the Vogue Cinema on the last Wednesday of the month. So far, the group has screened Carol and Love, Simon. “The [ticket] money goes to PFLAG by donation and the Vogue gets the money from the snacks, so we help them keep going too,” said Boorne.

PFLAG has a history in Sackville, with a chapter existing on and off in town since the early 1990s. Boorne reopened the Sackville chapter which had previously been run by community members Marilyn Lerch and Janet Hammock. Lerch and Hammock originally adopted Sackville’s PFLAG from its founder, the late Rev. Eldon Hay. Hay was also the first president of PFLAG Canada and was appointed a member of the Order of Canada for his advocacy work.

“[Hay’s] own son had come out in ’93 and he was deeply affected by that, and his daughter later,” said Anne Pirie, Hay’s wife who he often referred to as his “collaborator and co-conspirator in human rights work.” “He wanted to be supportive of them. He was also meeting students in university and was really interested in providing a support group for parents and families and friends.”

Pirie spoke about what PFLAG looked like in its early days. “Often the meetings were small and it was people just wanting to share their stories,” she said. “Largely it was for people to share their concerns and questions and talk about what it was like for them, as well as share their hopes and desires. He wanted people to speak from within, for themselves.”

Pirie recalled her own connection to PFLAG. “There would often be meetings and gatherings at our place. One time we had the 1-800 number line coming into our house… It was quite a treasure to go to those meetings, because I was learning too,” she said.

Pirie said that she is excited to see a chapter in Sackville again. “I think it’s wonderful. I fully support it, and it’s really wonderful to see that,” she said. “The leadership will do it in their own way, and move it forward in a new time, which is great. It’s always wonderful when new leaders emerge and bring their own approach.”

Boorne said that the events and meetings are open to members of the Mt. A community. “We are absolutely open to students,” she said. “We are all looking to feel like we belong somewhere.”

The next PFLAG meeting is Nov. 7 in the Leela Yoga building at 42 Main St. The next queer movie night at the Vogue will be a screening of Pride on Oct. 30.