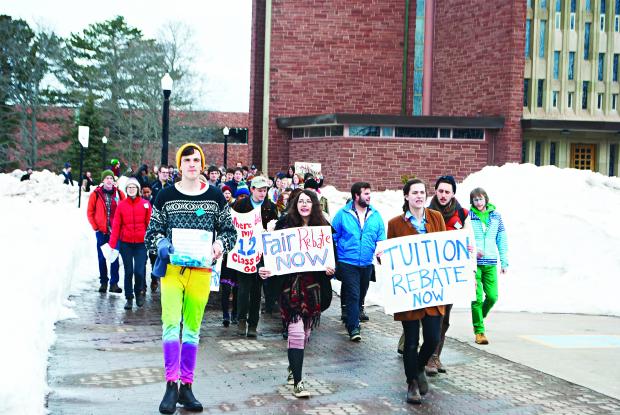 As the year comes to a close with the class of 2014’s graduation scheduled for Monday, students have not yet forgotten the effects of this years strike.

The members of the Mount Allison Faculty Association voted unanimously at their annual general meeting in favour of a symbolic motion expressing support for the student activists seeking reparations from the university.

MAFA’s members also unanimously resolved to recognize the contributions of students Alex Thomas, Laura Gallivan, and Erik Sin for their contributions to the Student Strike Headquarters during the strike.

On March 24, Mount Allison’s administration announced it would not provide a student rebate. An email from Ron Byrne said it would be “most appropriate to concentrate on meeting individual needs and on providing enhanced services.”

Only Mount Allison’s Board of Regents can overturn the administration’s decision.

In the meantime, students continued to be faced with an overload of work and stress without any tangible compensation. Many are still upset.

“For me, the big thing was that everything was rescheduled to fit a smaller time frame which meant busier weeks and less time to focus on each assignment, test, lab or midterm,” said first-year student Emilie Diver went commenting on the struggles faced during finals.

The administration has been estimated to have saved approximately $800,000 in unpaid salaries.

“Not getting compensated wouldn’t have been as serious an issue for me had we received information explaining what exactly our lost money would be going towards,” said Maureen Abegbidi, who will serve as president of Windsor Hall for the coming academic year. Abegbidi went on to challenge the use of the term ‘enhanced services,’ saying, “the administration kept throwing the term around, almost as if they really believed keeping the library opened longer earlier in the year would decrease students’ workload or replace information we did not receive.”

Before the announcement, a petition designed to prompt a rebate was circulating amongst students of the university. “No tuition rebate means no future alumni donations,” was the message sent by 657 different signatories to the Mount Allison University Administration. Whether or not future alumni will uphold this promise will only be seen in time, and will be decided by the personal decisions of the class of 2014 and those that follow them.

With the announcement of enhanced services in place of a rebate being one month before the last day of exam period, there was little time for hearing student responses or challenges to the university’s decision.