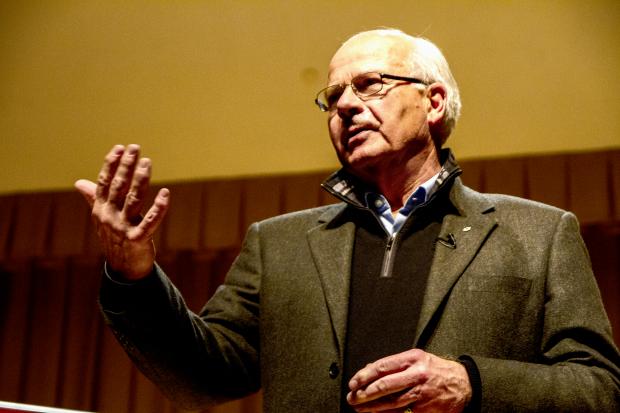 For the second year in a row, students hailing from the various disciplines offered at Mount Allison University had the opportunity to participate in the Mansbridge Summit, where they spent a day working with three guest panellists and the university’s chancellor, Peter Mansbridge.

In keeping with Mt. A’s Year of Global Engagement, this year’s summit required students to conceptualize a worldwide water shortage and to come up with a plan of action for Canada. With a particular focus on the “ethical considerations at play as they make decisions in the areas of business, health/development and environment/ecology,” as stated by Mt. A’s webpage, the panellists were chosen in order to reflect those considerations.

Panellist Jeremy Schmidt of the department of anthropology at Harvard University and expert in the areas of health, development, and ethics, described his role as such: “It’s essentially to offer background information and knowledge to the students when they were working their way through the scenario … the students asked me questions on a broad range of issues that were related [to the fields of health and development].”

Piper Riley Thompson, a returning participant in the Mansbridge Summit, added, “summit participants enjoyed lunch and breakfast as well as interviews with the panellists. To have face-time with these extraordinarily accomplished and inspiring individuals was an unparalleled experience.”

When asked about the origins of the Mansbridge Summit, the chancellor, who also occupies the position of Chief Correspondent with CBC, saw it as an opportunity to “do something that is directly related to the students … give them a sense of what I’ve got to offer in terms of my journalism career.”

The summit is funded by the family of the late John E. Irving, who built his fortune with the Irving group of companies.

“We were looking for something at the same time as the Irving family thought they wanted to fund something … we put the two together, sat down, and brought in some students … to talk about their ideas,” Mansbridge said. “We wanted [students] to be the driving force behind this.”

This year’s summit saw Mansbridge taking a much more active role within the process. “Last year, I wanted to watch them do things, not impose my journalism on them. But this year, we found a middle ground which was to let them do the debriefs with the panellists, formulate some questions, then I would sit down with them and go through those ideas and tell them where they could improve or structure things perhaps a little differently,” Mansbridge said.

The work accomplished by students during the day ultimately led to a panel discussion moderated by Mansbridge, where the questions formulated by the groups were passed on to the chancellor and would help him moderate the panel. This was the only event open to the public.

Tony Maas, a prominent figure in the advocacy for the health of Canada’s waters, and expert in the areas of environment and ecology, shared the same enthusiasm that could be seen in Riley Thompson’s comments: “looking at it from the perspective of someone who’s been a student, it was a pretty amazing opportunity.”