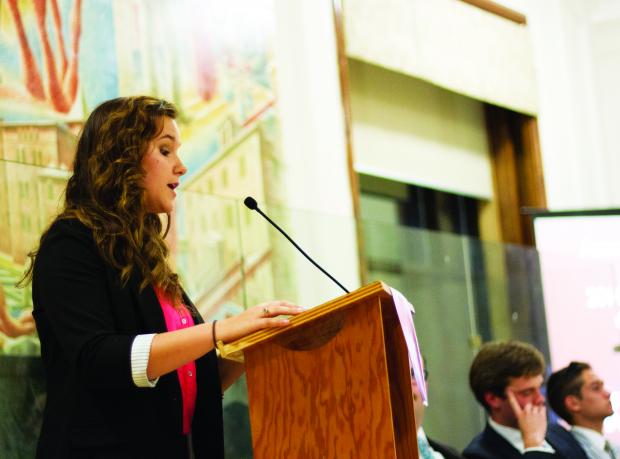 The Mount Allison Students’ Union kicked off the new school year with their first annual general meeting. On Thursday, Sept. 11, MASU provided an opportunity for students to hear from this year’s executive on their plans for the year and participate in smaller focus group discussions concerning issues of mental health services, elections, and more. There were approximately 60 people in attendance, most of whom were students, including many first- years.

MASU President Heather Webster spoke first, reviewing last year, and offering some prospective areas for improvement this year. Calling it “a year of firsts,” Webster referenced the many “wins” of last year including the the long-awaited launch of the bike co-op.

Webster pointed out the numerous partnerships made by MASU, such as those with the Princeton Review to offer mock LSATs and MCATs.

Webster also addressed MASU’s reaction to last year’s strike, which some students saw as problematic. “It is no secret that some students did not react well to the way in which the student union executive approached the strike,” Webster said.

Despite this, Webster stands by the way MASU handled the issue. “We continued fighting to just get students back in classrooms, rather than choosing to support faculty or administration.”

Webster concluded by saying that the event “kicks off the year of the student union review,” during which the executive will gather information with an eye towards reforming the organization in the future.

Following Webster, the four other executives spoke about their plans for the year. Josh Outerbridge, the vice- president of finance and operations, focused on MASU’s provision of health and dental insurance.

Outerbridge highlighted the plan’s reduction of ambulance fees, which can be as much as $650 for uninsured out-of-province students. Outerbridge also said the changes to the insurance plan’s model paid off. “Since going self-funded about three years ago, [the insurance plan] saved $100,000 in student money that would otherwise go to the profits of insurance companies,” said Outerbridge.

Kyle Nimmrichter, MASU vice- president academic, said he would work on developing the Academic Experience Survey to develop “quantitative feedback” for MASU. He also spoke of a referendum planned for this winter to approve MASU’s prospective emergency bursary program for students in need.

Annie Sherry, who oversees the union’s lobbying efforts as the vice- president of external affairs, spoke about Mount Allison’s relationship with the New Brunswick Student Association (NBSA). Sherry said the NBSA was successful in influencing NB’s political parties to consider their agenda for post-secondary education, as some of the parties used NBSA proposals as platform points. She encouraged students to vote in the upcoming provincial election. “This is your money, your education, and your future,” said Sherry.

“Students’ current access to mental health services are sub par,” said Andrew Johnston, the vice-president of campus life. He committed himself to improving services and to boosting awareness of mental health issues this year.

While he gave credit to the university for bringing in a psychologist for half a day every month, Johnston said, “At the end of the day, it’s just not enough.”

Johnston then outlined an upcoming campaign in November with partnerships with Change Your Mind, the Wellness Centre, and other organizations that promote good mental health.

The keynote speaker was Pat Joyce, the executive director of NBSA, who shared anecdotes from his two terms as MASU president. Joyce called upon the students to get involved and said, “If you want this organization to be student-driven, it takes driven students.”