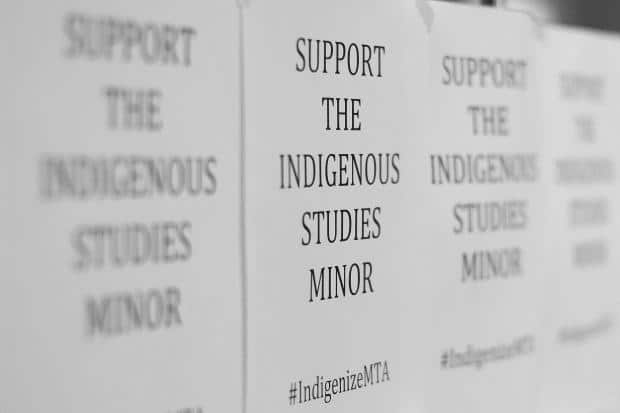 A blitz of posters covering the banisters of the student centre has put the movement to get an Indigenous Studies minor on the map. Before the posters appeared, approval of the minor was stuck in committee and Mount Allison’s Aboriginal Support Group, which initially proposed the program, had gone weeks without an update. Less than a week after the posters went up, Mount Allison’s Students’ Union unanimously passed a motion to support the program’s creation. The Aboriginal Support Group also heard back from the Academics Matters committee and have begun reworking the proposal.

The idea behind introducing the minor is simple.

“We have kind of a mixture of courses already available,” said Jenna Gaudet, a fourth-year geography and environmental studies student and a member of the Aboriginal Support Group. “We’re just trying to compile them together in the academic calendar to show what we have and we’re trying to get some new course on the books.”

While there is already plenty on the books to work with, there is one big catch.

The courses offered at Mount Allison with an Indigenous focus tend to be upper-year courses in a number of different disciplines, including anthropology and canadian studies.

“A lot of the courses on the drafted list of courses with Indigenous curriculum have… hidden prerequisites,” said Gaudet.

Even with the level of support shown for the minor over the past few weeks, the amount of demand for it remains open to question.

“We’re not sure of how popular this program would be,” said Gaudet. “In the past when programs have been put together like this, [the administration] realizes the need because students have been creating their own minor or major in that field.”

As it stands, students are allowed to put together a minor or major based off of a program at another university if Mount Allison does not offer that particular configuration.

Despite this option, there has only been one student at Mount Allison who has created an Indigenous Studies minor to date.

Proponents of the minor are still optimistic in the face of the course-related difficulties.

The Aboriginal Support Group requested the Indigenous Study Minor in 2012. Karen Grant, vice-president academic, put together a working group of four professors to draft a proposal detailing the courses included in the minor. The working group worked on the proposal in early 2014 and in December the proposal was sent to the Academic Matters committee.

“The committee discussed it and in the first instance, it was not persuaded that it was a point that we could see taking it to Senate,” said Hans vanderLeest Dean of Arts and Chair of the Academic Matters committee. “As a university, that is not the end point. There is the opportunity for more dialogue with that committee and a chance to rework what was suggested and to make another try at it.”

The movement fell into a relative silence until Emma Hassencahl, a second-year fine arts and a member of the Aboriginal Support Group and the Tobique First Nation, came up with the initiative to plaster the student centre in posters.

“The posters were to get recognition and support from the students,” said Hassencahl and that the posters achieved this goal.

MASU’s passing of a policy motion means it is required to advocate for the introduction of an Indigenous Studies minor for the next three years.

“I wanted to make sure that this something the MASU continues to push for going forward,” said Steven Black MASU’s vice president of academic affairs. “The policy locks it in as an objective that this organization will continue to advocate for in the years to come.”

“It really seemed like a no brainer,” said Black.

The Aboriginal support group also heard back from the Academic Matters committee and are now in the process of reworking the proposal.

“Once we work out the kinks, which will probably take about a year, then we’re hoping to see it in the academic calendar in the 2016-2017 academic year,” said Gaudet.

In the meantime, students need not wait for the minor to make an appearance on the academic calendar. The option still exists for students to build their own Indigenous Studies minor in consultation with the academic advisor.

“We have always had the possibility of students creating their own minor if that minor doesn’t appear on the books,” said vanderLeest.

Gaudet said that one reason this minor is worth implementing is that it would allow Mt. A to be competitive with other schools that already have this minor.

“So many other schools offer this program and we don’t have anything close,” said Gaudet.

Gaudet said this minor is also important because it gives native and non-native students to learn about native culture and histories here at Mt. A.

“Mt. A is dramatically behind the times in terms of support for indigenous students and programs that introduce people to native histories and cultures,” Gaudet said.