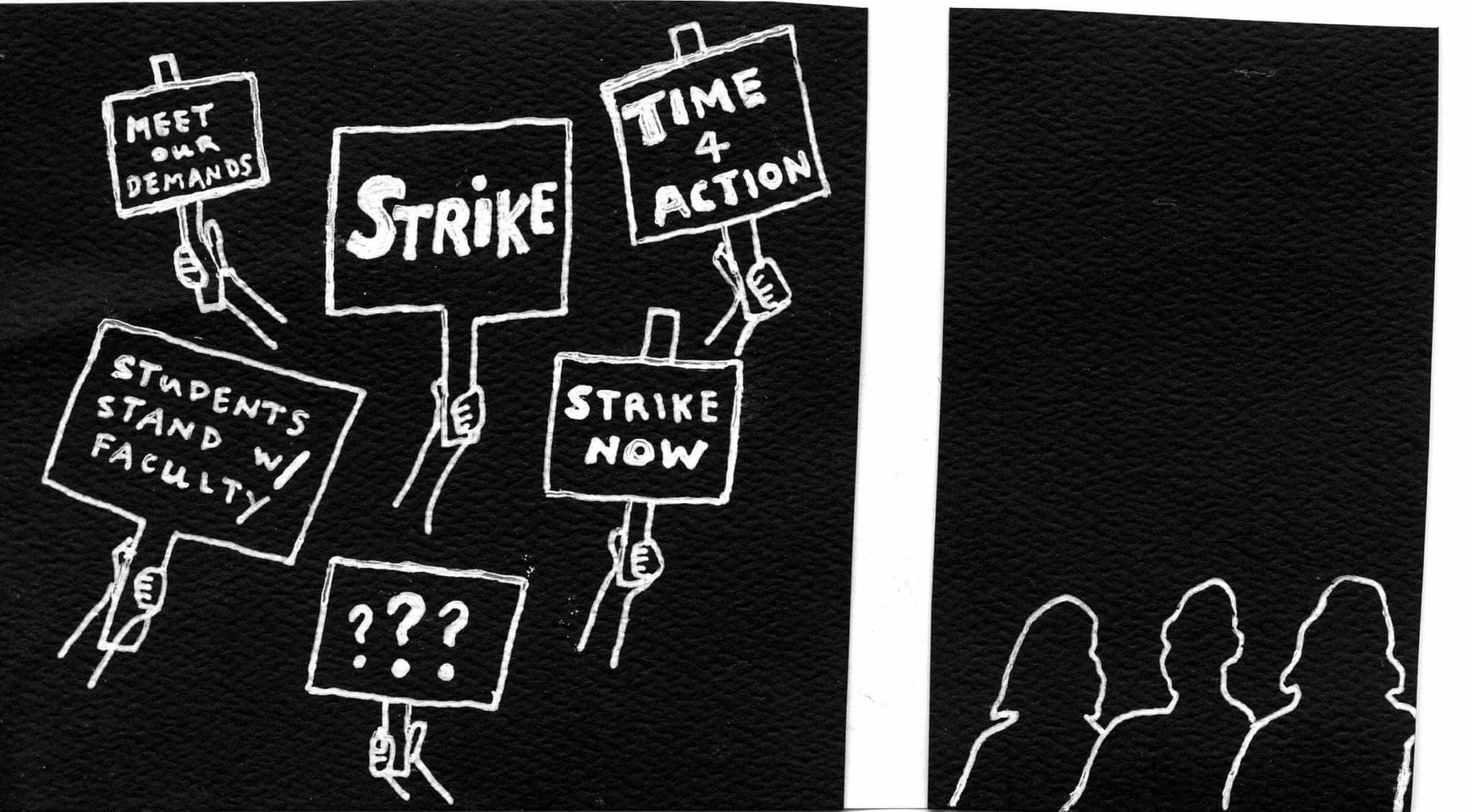 Strike update as of Tuesday, Feb. 4

Just hours before the Mount Allison Faculty Association’s declared strike deadline, the University’s director of marketing and communications, Robert Hiscock, sent an email out to students cancelling classes for the following day. That was Sunday, Feb. 2. As of Monday, Feb. 3, MAFA was on strike.

On Feb. 2, following the University’s cancellation of Monday classes, MAFA released a negotiation update on their website stating that the MAFA negotiations team had recommended to the MAFA executive that they reject the offer the administration had made on Feb. 1. They confirmed that this meant they would be on strike as of Feb. 3 until further notice. They also mentioned that they “remain[ed] open to negotiating” and were “disappointed” that the University was “unwilling to meet with us [on Feb. 2]  to reach a tentative settlement before the strike deadline.”

According to MAFA, both parties agreed to negotiation protocol at the beginning of the negotiation process which included the stipulation that “Proposals would only be presented and discussed at the bargaining table.” MAFA said on its website that “The publication of bargaining proposals can make a settlement more difficult to reach: once one side has taken a position in public it becomes harder to retreat from that position, and reaching a settlement involves retreating from positions and finding a common ground.”

When asked whether he considered emails and online posts from admin to be bargaining in public, Hiscock said, “We feel we have a strong duty to be transparent about what we’re doing because the institution impacts a lot of people. Students obviously are impacted; faculty members, staff members and the province at large have a stake in what we’re doing.” He added that in the University’s messages to the students they “try to be very factual” and that they’re “not using emails to negotiate, we’re just saying there’s new content. So any of the content that we’ve put there, in one form or another … has already been reviewed by the bargaining teams.”

“Our negotiating team has been doing its best, but the administration is refusing to address the legitimate concerns of our membership,” said MAFA president Matthew Litvak in a Feb. 3 press release. “This round of negotiation is about protecting the quality of the education that we offer at Mount Allison. Our working conditions are students’ learning conditions.”

On Jan. 24, the MAFA announced that faculty had voted in favour of possible strike action. On Jan. 28, MAFA set a strike date of Monday, Feb. 3 for members of the full-time unit. There was a disagreement between the University and MAFA on the legitimacy of the part-time faculty’s participation in the Jan. 24 vote. According to Hiscock, the University asked the provincial department of education for confirmation of the specifics of the vote because “It wasn’t clear to us. It seemed like, from what we were getting, there was a fairly low turnout of the part-time group.” On Jan. 31, MAFA held another vote specifically for part-time faculty and 93 per cent of those who participated voted in favour of the motion. MAFA announced that the part-time faculty would join the full-time faculty in what was then the potential Feb. 3 strike.

This comes after three days without meetings. Last week, Hiscock described the meetings to the Argosy: “We have about four people on our bargaining team … [MAFA has] about four or five people. So it’s sitting down and talking. They discuss things through sharing proposals. If I have a topic I’ll say, ‘Here’s our proposal for this subject’ … and then they just talk. So it’s not very fancy but that’s kind of what it is.”

In the first few days of the strike, some students brought food and coffee to the picket lines while others changed their routes and routines to avoid what one student called “awkward” interactions with them. On their website, MAFA answered student concerns about “crossing the picket line”: “These pickets do not prevent your access to the university grounds and will be peaceful. Please feel free to stop and chat with us on the picket lines or at our Strike HQ (170 Main Street, beside Jack’s Pizza). You are welcome to join us on the picket lines and show your support!”

Mount Allison Students’ Union released a statement of neutrality on Feb. 4. President Emelyana Titarenko is quoted stating that because the MASU represents all students, “many of whom have different views on the situation, it is important that [the MASU] respect them by remaining neutral at this stage of the strike.”

Mara Ireta Gordon, a fourth-year fine arts student and photo intern, said, “The strike has made it really challenging, as a fine arts student, to receive feedback from our professors for the work we will be exhibiting at the Owens in early spring.” She added that while students still have access to campus, “The lack of the valuable critique (from our professors) that shapes this year, and the work we make, is really devastating, and disappointing.”

She said that rushing to get materials together for the Independent Student Research Grant application deadline ahead of the strike deadline “highlighted for me the many ways in which Mount Allison professors are actively involved in students’ learning outside of class hours.”

Brandon Smyth, fifth-year political science student, also supports the faculty: “Everyone knows the incredible impact our profs have both in and out of the classroom. I 100 per cent stand behind our faculty and their right to strike. I hope the administration makes this right.”

Credit to Amelia MacDougall Fleming for her interview with Robert Hiscock