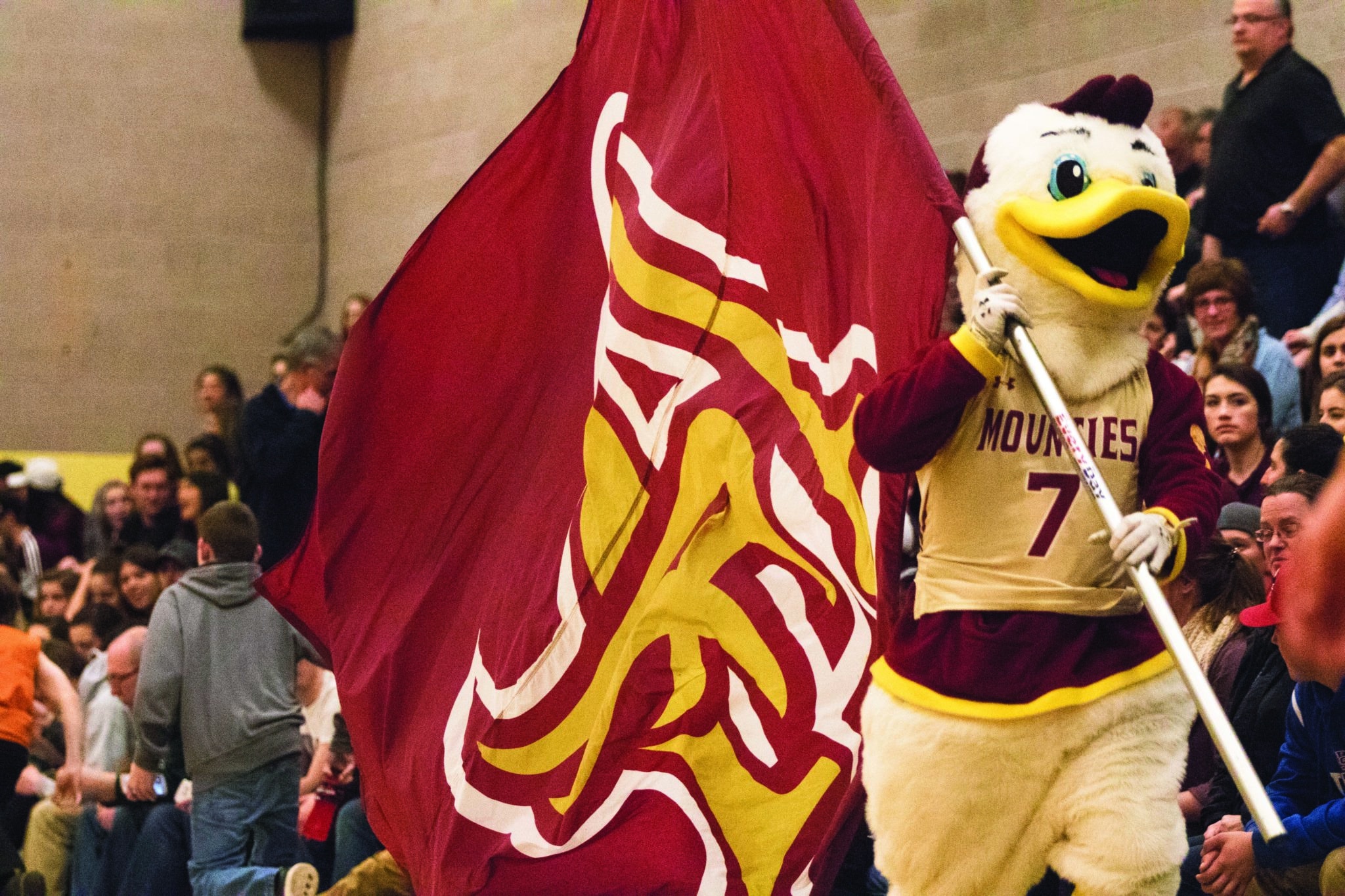 For the first time since 2009, the Mount Allison Athletic Centre hosted the ACAA basketball playoff tournaments with as many as 700 people packed into the stands for the marquee matchups of the weekend.

Mt. A’s men’s and women’s teams came into the playoffs as the second and thir 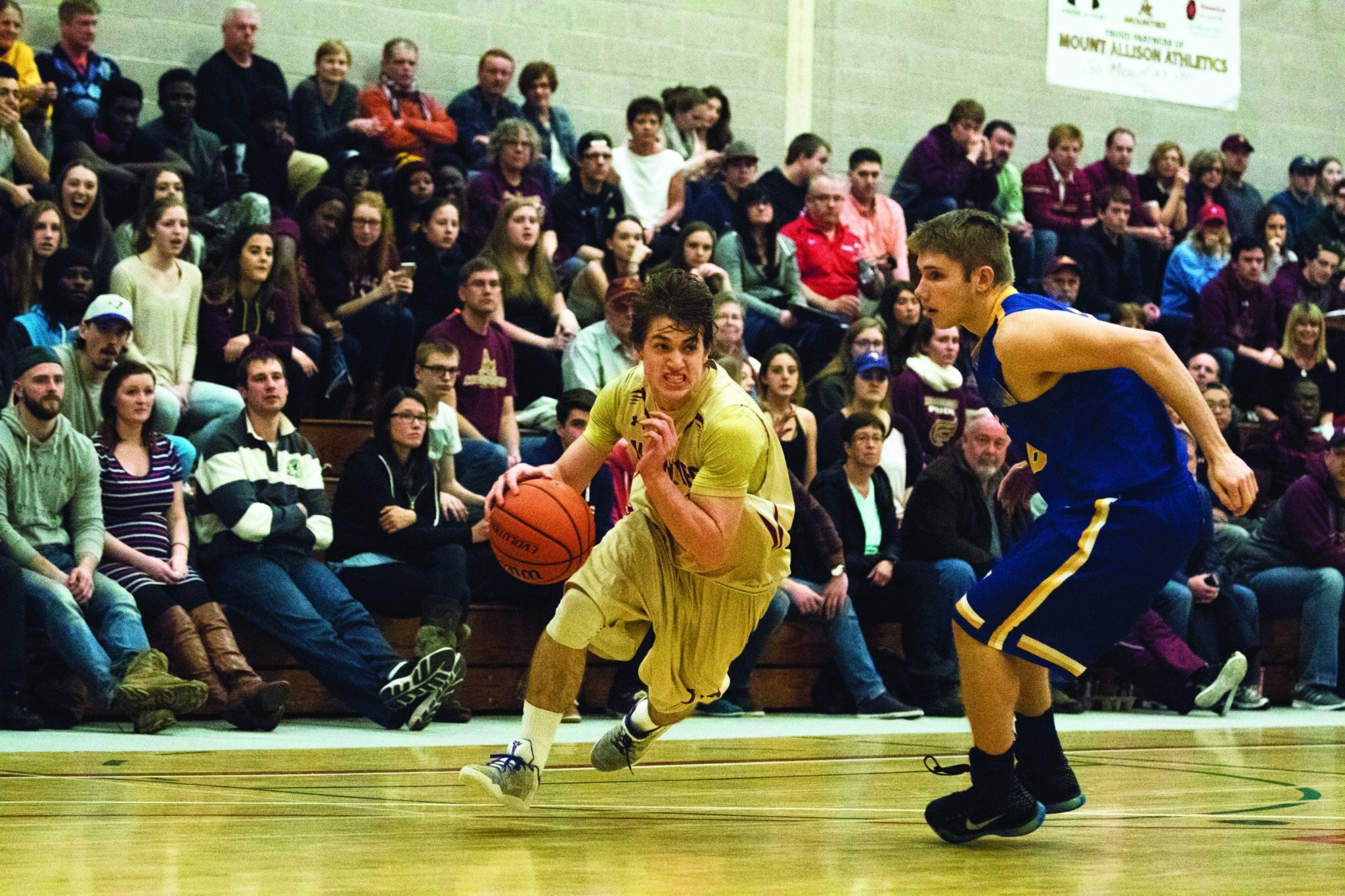 d seeds, respectively, and expectations were high, with both teams in contention for not only an ACAA title but also a spot at nationals.

Coming in as the 11th-ranked team in the nation, the women’s team started the tournament on Friday against the sixth-seeded UNBSJ Seadogs in the quarterfinals. The Mounties took the lead with the game’s very first basket, and never looked back, cruising to a victory against a team that had three wins over the course of the regular season.

The win set up a matchup against the sixth-best team in the nation, the Mount Saint Vincent Mystics, with a spot in the ACAA finals and the national championships at the Northern Alberta Institute of Technology in Edmonton on the line. Coming into the game, the Mounties had lost twice to the Mystics earlier in the season, before getting a win at MSVU in the last game of the regular season.

Third-year small-forward Erin Steeves emphasized both teams’ familiarity with each other going into the game.

“We prepared in pretty much every way that we could. We knew what they were going to do,” Steeves said.

The Mounties, spurred by the raucous home crowd at the Athletic Centre, jumped off to a 14-4 lead in the first quarter.

The Mystics, led by the experience of their seven senior players, responded in the second quarter, grinding their way back into the game with a combination of half-court and full-court defences that put pressure on the Mounties’ ball handlers.

The Mounties struggled to find their scoring touch throughout the game while the Mystics maintained pressure, capitalizing on any and all Mt. A mistakes.

Going into the final quarter with a 43-40 lead, the Mystics once again pressed the Mounties in the frontcourt, this time to great effect, forcing the Mounties to play at a high tempo.

It was in these circumstances, in front of packed crowd, that the Mystics showed their experience and poise. As the Mounties were plagued by a string of poor shots, MSVU started to build a lead that saw them through to the final.

The Mounties shot 1-15 from behind the three-point line in the game and ultimately could not get the ball to fall amid a 18-4 run by the Mystics.

“I think those small gaps where we had little drops in play, it did come down to experience,” Steeves said.

With only one player graduating, the women’s team will look back on this experience as a building block for the future. With ACAA First Team All-Conference players Kiersten Mangold and Sarah McGeachy and ACAA Rookie of the Year, Jill Harris, the future is bright for a team that will look to return to nationals for the second time in four years in the 2017-2018 season.

“We are going to take what we need to do individually and work on that for when we come back together in the fall,” Steeves said.

In the men’s tournament, the Mounties earned a bye to the semi-finals, where they faced off against the Crandall University Chargers on Saturday night with a spot at nationals and the ACAA championship game on the line.

The Chargers, led by league MVP Tomarcus Nix and defensive player of the year Brandon Fields, defeated STU in a tightly contested quarterfinal matchup the night before.

With somewhere between 700-800  spectators in attendance, the Mounties stifled a Chargers offence that had caused them troubles in their regular season matchups.

“I’ve never seen the gym nearly at that level. It was just such a great atmosphere to be in,” fifth-year forward Alex Chisholm said.

Led by ACAA Rookie of the Year Thomas LeGaillis, the team set a level of intensity that the Chargers, having played the night before, were unable to match.

The Mounties pulled away in the second half, much to the delight of the hometown crowd, with an 83-59 win, advancing to their first nationals tournament in 20 years and setting up a championship match with the hosts of the national tournament, the Holland College Hurricanes.

The Hurricanes were in search of their fifth-straight ACAA championship and had beaten the Mounties in all three regular-season meetings with the last game being a 124-79 blowout.

Against the Hurricanes, whose roster was filled out by international and ex-CIS players, the Mounties would need to play a near-perfect 40 minutes of basketball if they wanted to have a chance at their first ACAA title.

The gym was once again filled to capacity, and despite early foul trouble for LeGaillis, the Mounties were able to hang tough with the Hurricanes in the first half.

Thanks to the scoring efforts of seniors Alex Chisholm and Brad Fuller, the physical presence of fourth-year Rodreke Joseph in the paint and the poise of senior Jesse Balser and rookie Seongwoo Park in the guard position, the Hurricanes held only a slim 38-37 lead at halftime.

In the third quarter, the Hurricanes’ athleticism and shooting touch was on full display, fast-breaking off of turnovers and knocking down open shots with deadly precision.

Going into the fourth and final quarter, the score was 66-50, but the Mounties in their home gym refused to fold. “You can never quit in a basketball game, especially in that environment – there was not a chance we were going to back down,” Chisholm said.

Led by LeGaillis, the Mounties’ offence started to roll, closing the gap to within nine points, a run which was punctuated by a break-away pull-up three-pointer by the rookie of the year that brought the crowd to its feet.

The comeback proved to be too late in the making, with the Hurricanes taking the game 81-70, and with it, the championship.

The tournament as a whole was a huge success with large crowds in attendance for the entire weekend. “The joint was alive and electric,” said Mounties commentator Steve Ridlington. “It was tremendous to see that level of support, something we don’t see everyday.”

With the performance against Holland in the final, the Mounties proved that they can compete with the kind of competition they will face at nationals from March 16-18.

Going into the tournament as the eighth seed, the Mounties will face the number-one team in the country, the Sheridan Bruins. “Nobody expects us to win,” Chisholm said. “We’ve got nothing to lose. We go out there, play our hearts out and anything can happen.”