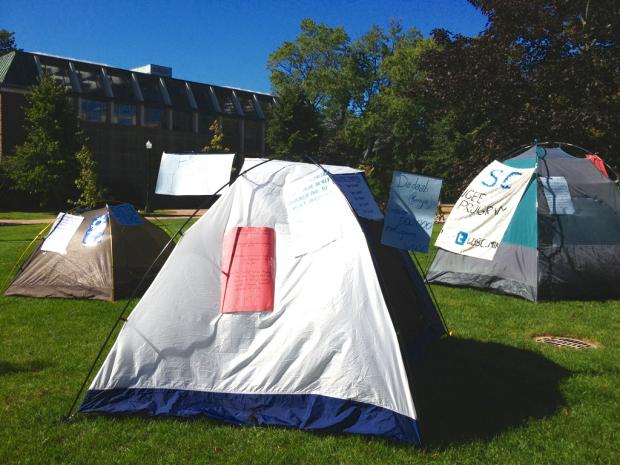 If you walked by the academic quad last Wednesday at an opportune hour, you may have noticed a few tents set up on the grass beside the Crabtree Building. It might seem like an odd place to set up camp, but WUSC Mount Allison begs to differ.

Last Wednesday was their fourth annual refugee camp simulation, aimed at spreading awareness about WUSC and the programs that Mt. A’s chapter supports, which are the Student Refugee Program (SFP) and Shine a Light.

Anyone stopping by the tents during the camp simulation event, which tried to reproduce conditions that many refugees live in, would have encountered facts about refugees and refugee camps, as well as greeted by WUSC members who informed students about the SRP and Shine a Light, a program that focuses on improving girls’ access to education in these camps.

“Students were definitely curious,” Maxwell says, adding that “it was an effective awareness campaign.” Aside from the SRP and Shine a Light, the group also raises awareness for a variety of other international development issues.

WUSC stands for World University Service of Canada, a non-profit, non-governmental organization that focuses on giving education, employment, and empowerment opportunities to disadvantaged youth all over the world. Committees set up in universities in Canada and globally work to achieve this goal, backed by the organization’s motto: “Education changes the world.”

The Student Refugee Program (SRP) provides students from the Dadaab Refugee camp in Kenya with the opportunity to study at Canadian universities. Dadaab is the largest refugee settlement in the world, whose five camps hold almost half a million people. SRP is unique in that it provides students an opportunity to pursue their post-secondary education while also being a permanent resident in Canada.

“Currently we have two students studying here,” says Erika Maxwell, President of WUSC Mt. A. The organization is legally bound to sponsor the students’ first year at Mt. A in full, but the university goes further by financially sponsoring fifty per cent in the students’ second year and twenty per cent in their third year, so eight dollars from every students’ fees goes toward supporting this cause annually. This number was doubled after last year’s referendum, when students responded to calls for the program to be made more sustainable and stable, as sponsorships occur every two years.

In an interview to The Argosy in March last year, then treasurer Teresa Million said that Mt.A’s “last student refugee, who [was] in third year, had to postpone his studies in order to work because [tuition] was too expensive.