Students, parents and locals came out in support of raising money and awareness for those affected by cancer

Last Friday, Mount Allison held their second annual Relay for Life fundraiser at the Athletic Centre. There was a large turnout, with 109 people registered. This year, Relay for Life at Mt. A raised $14,700. “This is a year-long process,” said Lisa Hanselmann, one of the Relay for Life co-chairs at Mt. A.

About 1 in every 2 Canadians is diagnosed with cancer. The Relay for Life fundraiser, started by the Canadian Cancer Society in 1985, gives communities all over Canada a chance to come together in support of cancer research. Relay is also a place to honour those who have passed away from cancer, those who are survivors of cancer, and those who are currently living with a cancer diagnosis.

In October, all the Relay co-chairs from Atlantic universities as well as the co-chairs from Queen’s University meet up in Halifax for a weekend to discuss ways to improve the upcoming school year’s Relay for Life.

“[This] retreat just gives us a lot of good ideas as we get to see what works and what doesn’t work at other schools,” said Sarah Doak, co-chair of Relay for Life at Mt. A. “It’s nice because you really get to build a support network.”

“Last year was our first year doing it as a school, so this year was really about building it up from that and making it even bigger and better,” said Hanselmann. This is the 17th annual Relay for Life that Sackville has hosted, but only the second year that the fundraiser has been run by  students.

Doak spoke about how Relay for Life is important to have at school for students who may have family members and friends diagnosed back home. “It’s just nice to see the community be able to come together and show that you’re not alone and people support you,” she said. “It’s nice to be able to show the survivors that too, that we care about them and that we’re happy that we’re able to take care of them and give them a good event.”

Emma Kruisselbrink, a fourth-year psychology student, attended Relay for Life for the first time this year. “I think it’s important because it raises money for a good cause,” she said. “I don’t have someone directly affected by cancer, [but] my uncle has ALS so I know the impact that illnesses have on people and families.”

“This is my seventh Relay for Life,” said Mackenzie Gordon, a fourth-year psychology and sociology student. “I participated in Relay all throughout high school.”

Gordon said this was her first Relay for Life at Mt. A but she was excited to participate. “My dad was diagnosed with cancer when I was in Grade 6, so volunteering and helping out with Relay for Life has been a super important part of my life,” said Gordon. “While volunteering we’ve been able to meet with survivors and I can see that’s really important.” 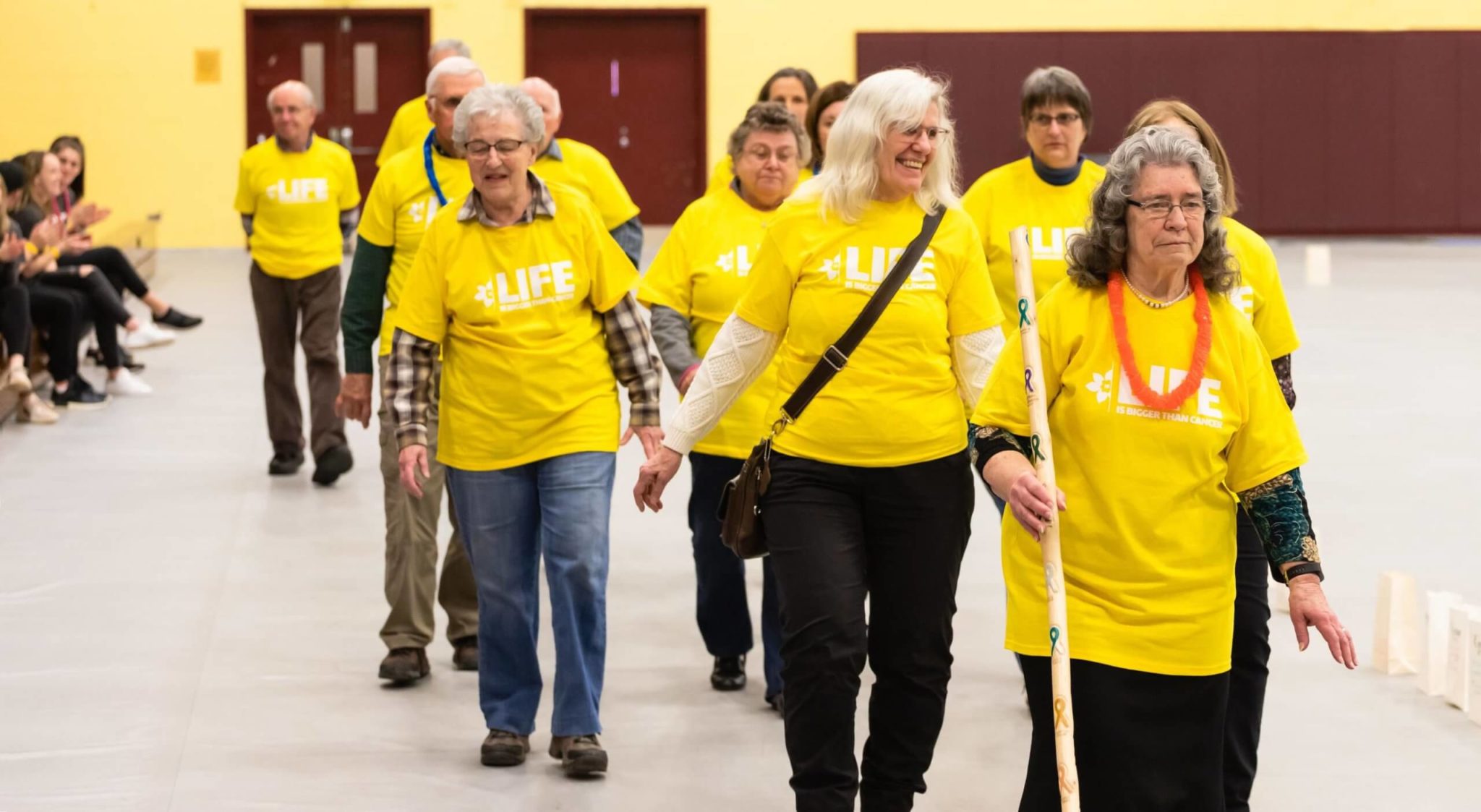 The money raised at Relay for Life goes towards cancer research, but also things like camps for children living with cancer “or transportation to hospitals if you’re in a rural community,” said Hanselmann. “In Halifax they have a lodge where cancer patients can stay right by the hospital, and they still have a community and have all these support systems at the lodge. Yes, we’re doing it for research, but there’s way more support [systems] that are helping too.”

This year at Relay for Life, Mt. A had live music, games and food, as well as therapy dogs. One of the most important activities is walking around the track which is lined with luminaries. A luminary is a personal message written by participants to honour someone they know who has been impacted by cancer. Small candles are placed in the luminaries to light up the track.

“It really is something that affects everyone, whether you’re diagnosed or you know someone who is diagnosed,” said Doak. “It’s important to look at how far we have come … And one of the reasons for that is because of events like this.”