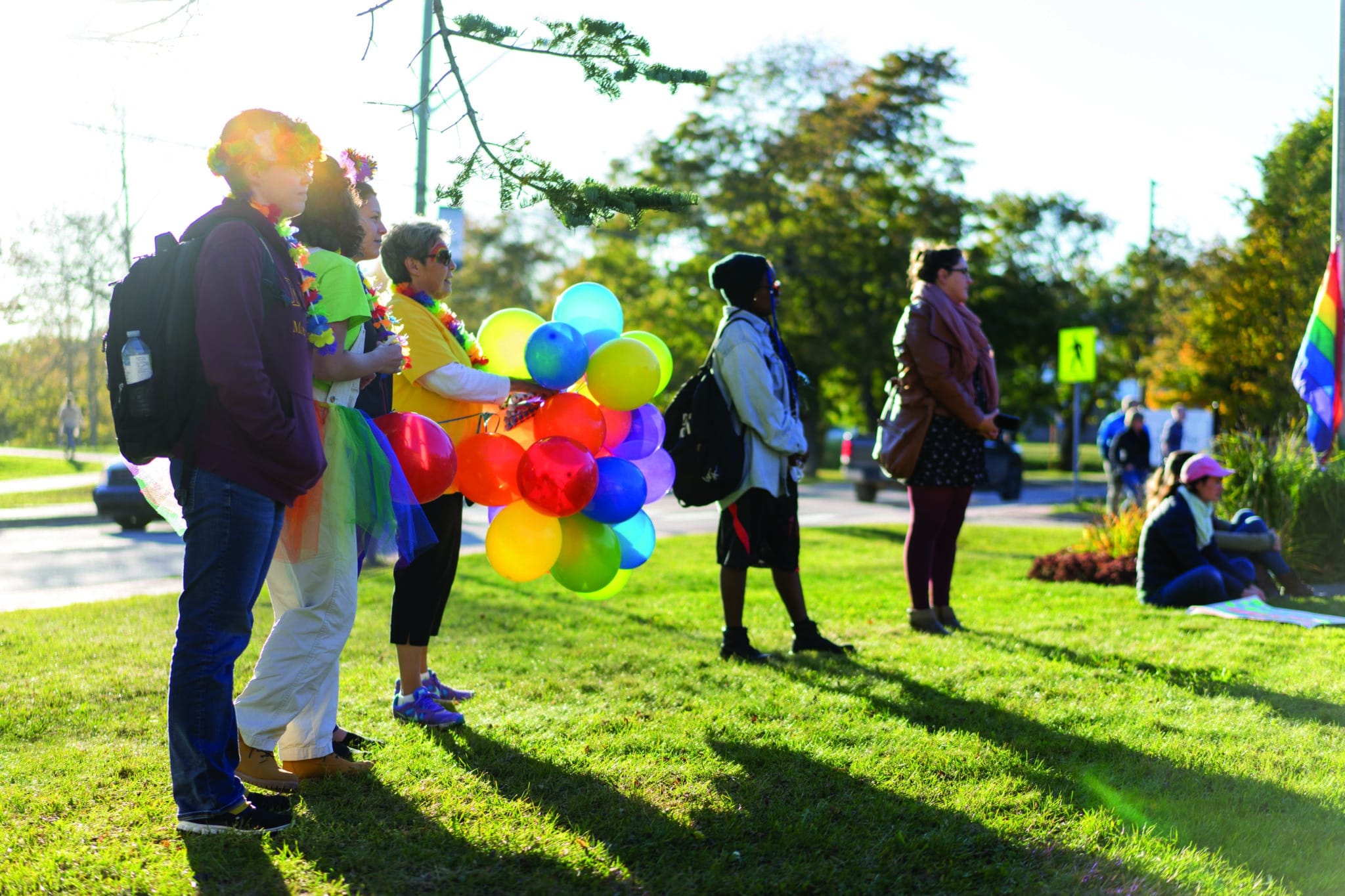 Sackville’s celebration of the LGBT2Q+ continues to grow in inclusivity

The first speaker was Melody Petlock, Mt. A’s SHARE (Sexual Harassment and Assault Response and Education Services) advisor. She spoke on how far the Sackville community has progressed since she first began working for the University in 1997. Four years ago, the only acknowledgment of pride was a flag raising: “I remember rainy days when there were a dozen of us around that flag.… It’s amazing to see a rainbow of people out there, so many you can’t even pick out the faces,” said Petlock.

Rev. John Perkin used his platform as a speaker at the parade to acknowledge the oppressive and discriminatory role that the Christian church has often played in the fight for LGBT2Q+ rights. “Religion has a lot to answer for in terms of supporting the rather binary division of the world into ‘them’ and ‘us,’ ” said Perkin. He directly addressed a passage in the Bible that is often cited as proof that Christians should condemn homosexuality, the sin of Sodom and Gomorrah. Perkin argued that the actual sin was “not being hospitable to others and refusing to respond to cries of the poor and needy.”

Perkin also spoke on how important discussion is to generate understanding and compassion, saying he is receptive to all conversations anyone would like to initiate: “I’m open to following the example of Eldon Hay, who was an outspoken advocate for gay rights, who was always open to the individual in front of him.… It’s in conversation that we nurture a sense of being people, together.’’

Janet Hammock, Mt. A professor emeritus and LGBT2Q+ activist, was then invited to speak. She too touched on the passing of Rev. Hay, the significant impact he had on her life and his efforts for the queer community, saying, “He worked tirelessly behind the scenes to change the minds of religious leaders, government officials, church congregations and, most important of all, ordinary people.” She then led the crowd in a moment of silence “in remembrance and thanks for the life, love and spirited advocacy of Eldon Hay.”

Seth Winward, co-president of Catalyst (Mt. A’s support and advocacy group for sexual and gender minorities and their allies), was next to speak. He spoke on the history of pride events in North America and the importance of remembering those who made it possible for pride events to evolve from protests to celebrations.

Windward cited the Stonewall riots of 1969, violent demonstrations by the queer community in protest of police raids, as the beginnings of the movement that is now a parade: “Today, the meaning of Pride has shifted, from fighting the norms of a system to celebrating our differences from those norms.” In conclusion, Winward said, “Today we celebrate who we are and how far we’ve come. Tomorrow, we get back to work.”

The crowd proceeded to turn their attention to the flagpole and began to cheer as the Pride flag rose.

Ron Atkin, deputy mayor of Sackville, closed the ceremony with well wishes and support from the Sackville community, and asked participants to keep Eldon Hay in their thoughts as they started the walk down to city hall.

As the MASU organizer of this year’s Pride, Emma Miller said, “I was thrilled to see so many students, staff and community members actively showing their pride. The planning process was a little hectic, however having Matt Pryde [Sackville’s manager of recreation programs and events] and the Town of Sackville provide their assistance and support made for a great event.” She expressed her appreciation for all those who came out to show their support.

Many of those in attendance expressed their hope that the Pride Parade in Sackville will only continue to grow. The idea that the fight for LGBT2Q+ rights is not yet over was a common thread through all of the speakers. Petlock closed her speech by saying, “We have to keep going, we have to keep coming out and showing our support. We have to keep making our campus, our community and our world a safer place.”