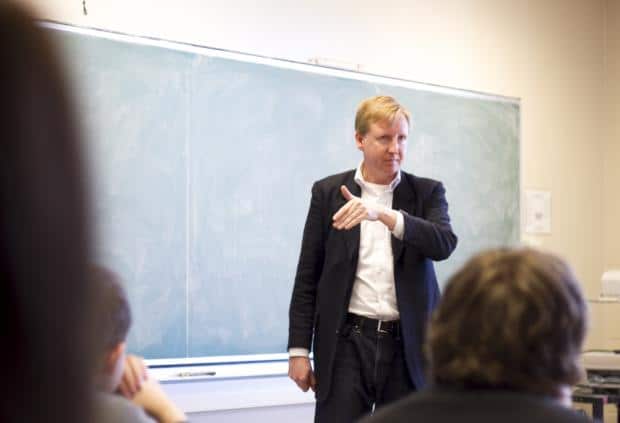 The leader of New Brunswick’s New Democratic Party took a break from politics last Friday during a visit to Sackville, where he discussed his prior career in democracy promotion.

Mount Allison University’s Centre For International Studies  (CIS) invited Dominic Cardy, leader of the provincial NDP, to share his past work and current views on democracy promotion abroad. During the March 7 event, Cardy spoke to approximately ten students in the Avard-Dixon building.

Cardy began his work abroad in 2001, working for the National Democratic Institute (NDI) until 2008, before renewing his involvement with the provincial NDP. In his senior staff position at NDI, Cardy worked in countries such as Nepal, Pakistan, and Cambodia. In the span of an hour, he referred to his own experience to highlight the current challenges in trying to establish democracy abroad. Founded in 1983, the National Democratic Institute, an organization that deems itself non-profit and non-partisan, although loosely affiliated with the  American Democratic Party, works with a wide array of similar organizations across the world and largely focuses on the promotion of democracy and institution building abroad.

While recognizing the achievements of his former employer, Cardy was also, at times, quite critical of the work they had done, noting the importance of being extremely considerate of the local socio-economic and political circumstances when working abroad. In the first few years of its existence, “[NDI] was a complete waste of time and money […] the amount of money involved, the technology involved, the resources that go into an American political race are so vast compared to anywhere else in the world that the transferability of skills was very minimal,” explained Cardy.

In contrast, Canada’s elections are done with much scarcer resources—due to this, there is a much higher transferability of techniques. Cardy said this led the organization to hire a greater number of Canadians.

While the organizing of elections in autocratic countries was quite popular for a period of time, the organization quickly realized that simply holding elections was not necessarily a step forward. “Having an election doesn’t necessarily mean very much,”  Cardy said. Citing Russia’s current occupation of Crimea, where Russia plans to hold a referendum concerning the possible annexation of Crimea by Russia in the near future, he said the results of this referendum cannot be regarded as legitimate.

“You can’t organize an election in ten days,” Cardy explained, “but because in the West we hadn’t thought about what elections meant as a part of democracy, for a long time you would just sign off on anything that looked like an election. It took quite a while for groups like mine to start being much more rigorous.”

The shift was eventually made from organizing elections to focusing on the structural aspect of a country’s political system. When linking his current line of work to his days with NDI, it is clear Cardy values the opportunity to work alongside various political parties from across the world. “I had a nearly unparalleled chance to work with dozens of different groups all working in the same basic task as I am as a leader of my party—trying to win elections—and see how they approach different challenges. It was an incredibly eye opening experience,” he said.

“We had planned [the event] to be a smaller, more seminar-style talk and discussion that allowed for engagement with the students present,” explained CIS Coordinator Natalie Brunet, adding that she was satisfied with student turnout.