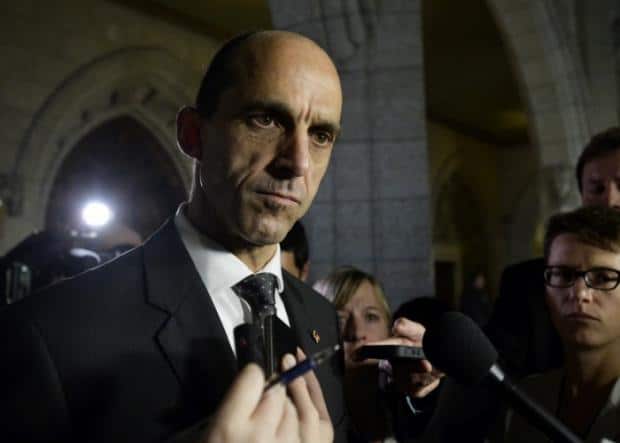 Public Safety Minister Steven Blaney has tabled bill C-44 – the Protection of Canada from Terrorists Act – and with it the government intends to expand CSIS’s powers outside of Canada, take on new powers to strip citizenship from some Canadians and broaden confidentiality protections for intelligence sources in court.

The Canadian Security Intelligence Service may see a further expansion of its powers in the weeks and month to come, but Blaney stressed the need to clarify current powers first to address the threat of terrorism.

“What is a big challenge for CSIS is to be able to share information with out allies and partners whenever an individual who is suspected travels abroad or is coming back,” said Blaney.

“With this bill comes clarity so that CSIS can work with our allies to share information and at the same time be able to rely on our sources because we can give them confidentiality and privacy, protected within the scope of the law, and there will be legal oversight.

“The first responsibility of the government is to keep Canadians safe. We will not over-react, but it is also time that we stop under-reacting to the great threats against us,” Blaney said during question period before tabling the legislation.

All three main changes included in the bill were telegraphed by the Harper government well before the bill’s release – especially the section on protecting the identities of sources in court. In C-44, “the identity of any human source and any information from which the identity of a human source could be inferred” will be withheld in court, barring special circumstances. This expansion will ensure intelligence witnesses and sources enjoy the same degree of anonymity afforded to police sources.

The clause addressing activities outside of Canada will open channels of communication between Canada and allies in the Five Eyes group – the United States, United Kingdom, New Zealand and Australia.

“Without regard to any other law, including that of any foreign state, a judge may, in a warrant issued under subsection (3), authorize activities outside Canada to enable the Service to investigate a threat to the security of Canada,” reads the bill.

Opening those channels of communication puts CSIS in a position to exchange information on Canadian civilians with allies – a new power which promises to be one of the most controversial aspects of the bill.

Michael Geist, a cyber security expert with the University of Ottawa, says the bill is consistent with expectations, which anticipated a grab for heightened powers, and that further legislation based on last week’s attacks will presumably come later.

“As for C-44, granting CSIS effectively unlimited powers globally – the bill says warrants can be issued without regard to any law – is shocking and potentially open to challenge,” said Geist in an email.

This article appears courtesy of a partnership between iPolitics and the Canadian University Press.