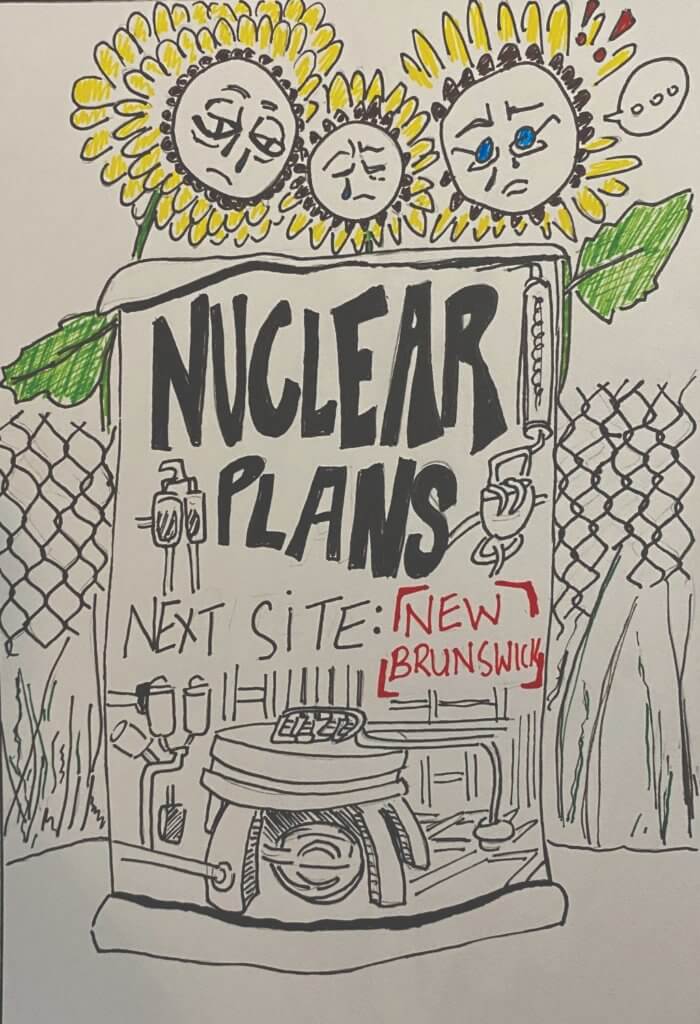 Sustainable energy is a pressing issue that continues to demand resolutions, and fast. Being such an urgent issue, environment and sustainability were central components to the political platforms of the recent provincial election. Blaine Higgs’ newly elected Progressive Conservative government ran on an environmental platform which proposes to divest from green energies in New Brunswick, in favour of a more economically lucrative source: nuclear.

New Brunswick has an abundance of sources for renewable and sustainable energy. From the tidal forces of the Bay of Fundy, to windy pastures and sun soaked mountains, the province hosts a wealth of renewable energies.

“It is true that we already have relatively inexpensive renewables [wind and solar] that could enable NB to achieve 100% carbon-free energy on the electricity grid without too much difficulty,” Dr. Brad Walters, an environmental science professor at Mount Allison said over email. “But that is possible in large part because New Brunswick already has access to substantial carbon-free, base-load power that can enable the rapid scaling-up of more variable renewable sources like wind and solar.”

Blaine Higgs and the PC government want to divest from these renewable sources in favor of nuclear energy. While nuclear energy is more economically friendly, some argue it is a more dangerous and unpredictable solution. As it stands, the premier is looking to provide New Brunswick with clean energy from Small Nuclear or Modular Reactors (SMR). The earliest predicted release date for a commercial SMR is 2022, with development companies not predicting full scale operations until at least 2027.  With the environmental crisis as it is, is it worth investing in theoretical SMR technologies now? “Small-scale nuclear, even if it could be made to work in a way that entails little risk, is probably not needed for New Brunswick,” according to Dr. Walters, “but it may well prove valuable in the future for many other jurisdictions.”

Nuclear energy, while efficient, comes with many risks, according to third year environmental science student Charlotte Hatfield. Not only is nuclear power one of the most expensive energy sources, it is also one of the most dangerous. While disasters on par with Fukushima and Chernobyl are unlikely with SMR’s due to their small size, the overheating of a reactor’s core can still spell disaster, according to Hatfield. “I don’t think nuclear energy is green energy,” Hatfield said, “Yes- here is “clean” energy… but only if you do all these steps exactly right and no natural disasters happen. [Nuclear power plants] create less emissions than fossil fuels for sure, but I don’t think that should be the only standard for a clean and green energy source. The consequence of even a small nuclear reactor could have disastrous environmental effects.”

According to a BBC report on SMRs, many rely on designs which are essentially shrunken versions of the massive nuclear reactors currently in use. Health and safety are the areas being focused on by engineers and scientists most closely. The most successful SMR designs, currently, rely on an integral system differing from the traditional nuclear reactor design. Integral systems combine several functions which are separate in regular reactors into a single unit. This both downsizes the reactor, and makes it more safe. By combining functions like fuel and steam, these designs remove large areas of pipe, one of the most accident prone and structurally unsound areas in any reactor.

Another positive comparison between SMRs, traditional reactors, and plants is that of toxic waste production. The BBC report shows that SMRs are predicted to produce very little waste in contrast to current conventional nuclear power plants, like the Point Lepreau nuclear station on the New Brunswick’s Fundy shoreline. SMR waste is also anticipated to be recyclable with the goal of waste being reused to fuel the SMR itself. This would be a far cry from the reservoir of nuclear waste sitting in Point Lepreau now, undoubtedly a step towards a greener future.

SMRs certainly project a greener future once they are built. Despite their name, SMRs are not particularly small, standing about half the size of the Cube, or 23 meters in height. “The building costs and environmental impact of building SMRs and the units to house them could well be too great a price to pay for these reactors,” Australian physicist Dr. Michael Gladys said in an email to the Argosy, “the reality of it is that right now, we just don’t know enough to definitively say whether SMRs are a viable alternative energy source.”

It is likely that the immediate effect of SMRs, should they be both functional and officially approved, would be negative, both in financial cost and carbon footprint. On the other hand, nuclear reactors require much more observation than other forms of renewable energy (like turbines or solar panels) creating more jobs,  in turn stimulating the economy. SMRs would also provide and store energy continuously, as the reactor can just be turned on and left to run. Solar panels and wind turbines obviously rely on the weather to collect power, and ultimately store less than SMRs presumably would.

SMRs are certainly an exciting technology, and hopefully will prove to be a valuable energy source. But, even if they do prove to be, SMRs are probably not needed in New Brunswick, like Dr. Walters said. The general consensus among professionals right now seems to be that SMRs are too far off and too unknown right now for the government to be seriously considering funding them over the already available energies.