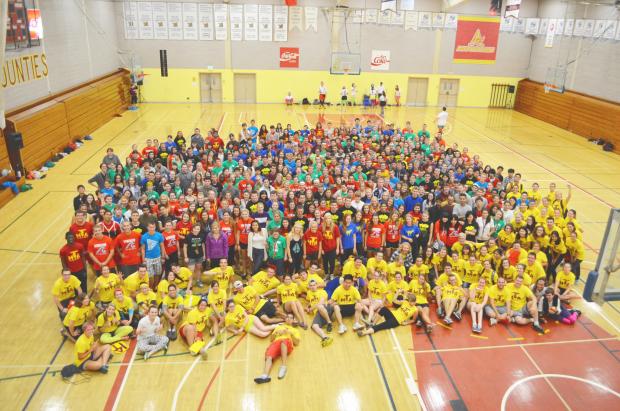 The class of 2017 was enthusiastically welcomed to Mount Allison University last week as incoming students moved into residence, marking the beginning of Orientation.

Orientation is an annual event at Mt. A, designed to get students excited about their time at university and ease them through the transition to academic life. In the words of Renée Connors, the Chair of this year’s Orientation Committee, the purpose of Orientation is “first and foremost to get new students feeling comfortable at Mt. A.”

The Orientation Committee is made up of twenty-two upperclassmen, known colloquially during the festivities as ‘white shirts’. An additional seventy-five volunteers (known as ‘yellow shirts’) participate in Orientation activities with the first-year students, helping them navigate the hectic period of activity.

Orientation at Mt. A lasts for nearly two weeks, with the bulk of activities taking place within the first week. Some highlights of Orientation 2013 include the annual Karaoke BBQ, a concert by the Mellotones at First Class Bash, the return of mentalist/illusionist Wayne Hoffman, and much more. Since graduating from Mt. A in 2001, Drew Dudley has been a regular feature of Orientation. He has returned to inspire incoming students with his keynote address.

In order to participate in Orientation, incoming students are expected to purchase welcome packs for sixty dollars that provide them helpful material and entrance to all Orientation events.  Connors was enthusiastic about the high level of participation in this year’s events, and reported that just over 600 welcome packs were sold to the class of 2017.