Sackville spends a night out 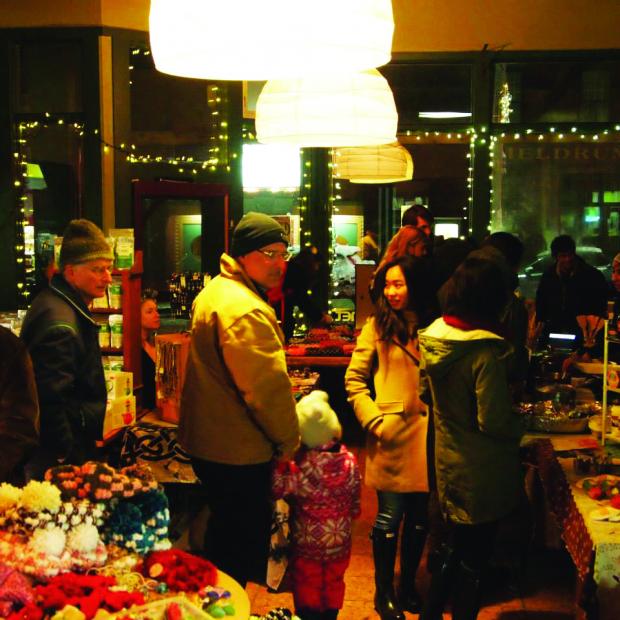 Students, locals, and visitors bustled around the streets of downtown Sackville for Midnight Madness. The event, hosted twice a year in the two months before Christmas, was host to a shopping frenzy with numerous sales and promotions from local businesses.

This year, Midnight Madness took place on Friday, Nov. 14, and is scheduled again for Friday, Dec. 5.

“It creates an atmosphere in the frenzy,” Salvation Army manager Nancy Somerville said. “It’s that first touch of Christmas.”

MacKinnon set up shop in his usual Saturday morning farmer’s market spot in the Bridge Street Café during Midnight Madness.

Yui, who is from Japan, compared the local event as quite different from events held in big cities like Tokyo.

“So many students went,” Yui said. “Everyone looked so happy.”

Midnight Madness had attractions including a full house of local vendors selling handmade food and products in the Bridge Street Café, a $4 peppermint milkshake promotion at Mel’s, Salvation Army sales, and visits with Santa Claus.

“Sales are better because of the volume of customers,” said Somerville.

“We have triple the sales of a typical farmer’s market,” MacKinnon said. “It all just depends on what shows up.”

“This year we have a ton of Christmas decorations, so those were promoted,” said Somerville.

“I think it’s important to cover events such as Midnight Madness because it helps to bring the Town of Sackville community together with the university community,”  said Stevenson.