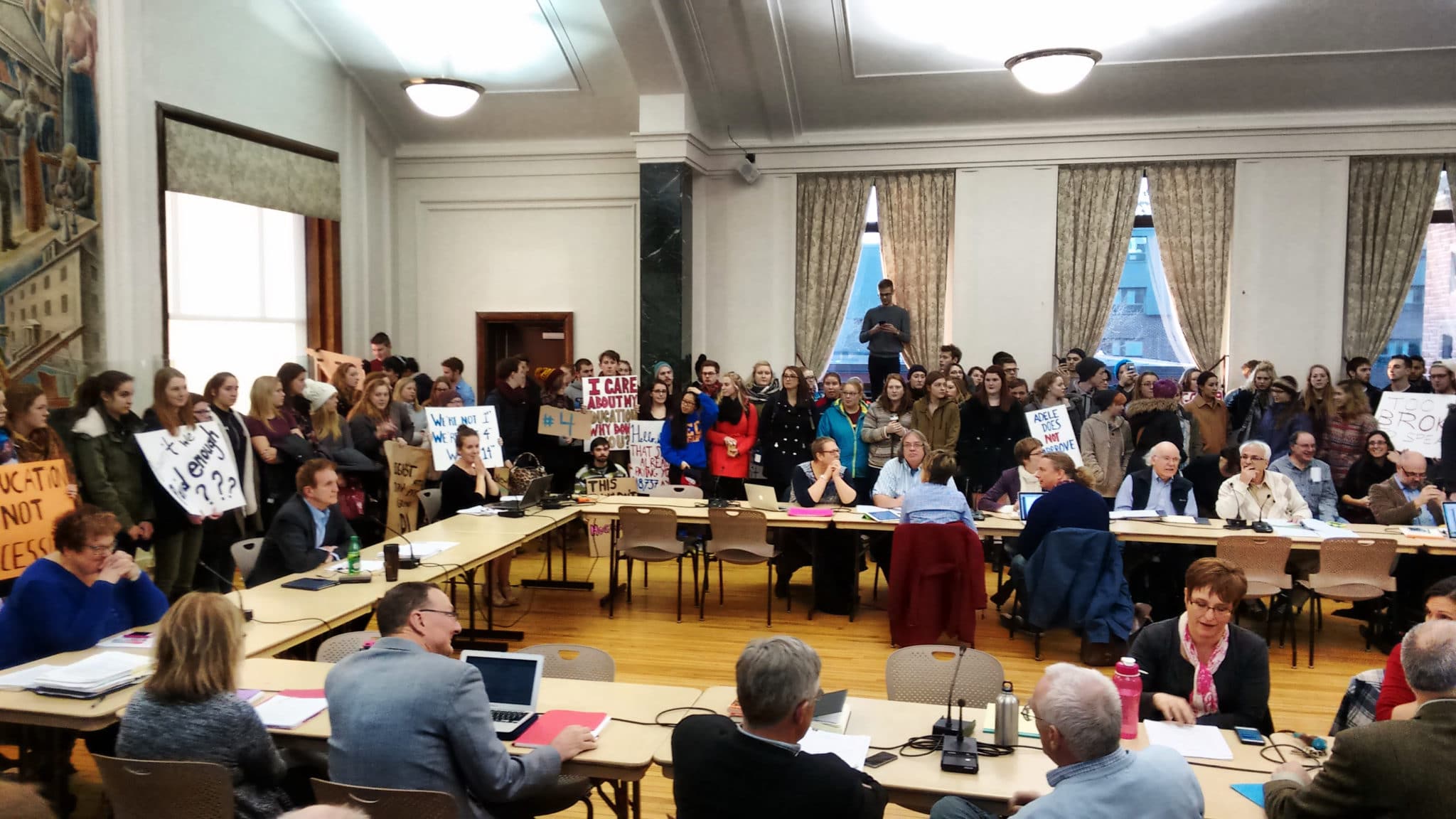 In the spring of 2015, the acceptance of a prospective graduate student’s application to the master of science program at Mount Allison seemed inevitable after receiving the Graduate Studies Committee’s (GSC) approval. The assured future of the proposed project fell into doubt as a dispute between the GSC and the dean of graduate studies developed over who had the authority to approve or reject such an application. Luciano Onichino, the applicant in question, asked the GSC to bring his case to Senate a few months later, on Dec. 1.

Onichino had applied to complete an M.Sc. in environmental studies and sustainability under the supervision of Dr. Michael Fox, professor and member of the GSC. A resident of the greater Tantramar region, Onichino proposed to develop curriculum in conjunction with an outdoor project currently in place at the local Salem Elementary school.

Onichino said he was planning to study the psychological impacts that this outdoor curriculum would have on the students. “Essentially it was to look at creating opportunities to expose children to nature,” he said.

In May of 2015, the GSC – the Senate committee mandated to supervise graduate work – voted to approve Onichino’s proposal to complete a “specially approved” M.Sc. program. Dr. Khashayar Ghandi, chair of the GSC, sent the application’s approval to the office of the dean of graduate studies. Ghandi said that to his knowledge, the dean had never before vetoed the committee’s approval of an applicant.

Jeff Ollerhead, the dean of graduate studies and non-voting member of the GSC, disagreed with the committee’s decision. In response to the committee’s approval, Ollerhead consulted his senior colleague Karen Grant, provost and vice-president academic and research, who supported his notion that the application should be rejected.

On May 27, Ghandi received an email from Grant’s email address, stating that the admission of such an individual “places our entire graduate program in jeopardy.” At the committee’s next meeting, the GSC voted to uphold their decision and refer the application to the dean of graduate studies to make the final administrative decision.

In an interview, Ollerhead would not comment on the specifics of Onichino’s application. He said more generally that proposed graduate projects in the “specially approved” category could be interdisciplinary but must cognate back to the M.Sc.’s mandated focus on biology, chemistry and biochemistry. He outlined that in conjunction with this, successful proposals must also be focused on scientific research and have backup supervisors within the chosen department.

On June 25, Onichino was informed in an email from the Registrar that Ollerhead had not approved the application. The email outlined the dean’s concern that Onichino’s “statement of interest” did not suggest that scientific research would be conducted, as he understood it. It concluded that the proposed project was not suitable for the graduate studies program offered at Mt. A.

“I disagreed with the committee and exercised what I considered to be my authority,” said Ollerhead. “At the end of the day, they make their votes and send their recommendations to me, and then as a member of the administration it’s my job to implement them—or in this case not to.”

Onichino said felt that the critique of his research proposal before the onset of his program was unfair. The graduate studies handbook states that a research proposal is only required after the completion of the first three months of a M.Sc. program.

“My assumption was that at the onset of application, it wasn’t required to have a foolproof project proposal,” said Onichino. “That it would be something that would be developed once the program would have begun.”

The academic calendar’s language surrounding the “specially approved” category for a graduate study is ambiguous. It does not explicitly state that a project must relate to biology, chemistry or biochemistry. There is no regulation stating that a backup supervisor must be found prior to an applicant’s acceptance.

Both Onichino and Ghandi confirmed that Ollerhead had expressed concern regarding Fox’s ability to supervisor this project. Onichino said he was told to look for a new supervisor if he wanted to receive approval.

Prior to the 2014 faculty strike, Fox had supervised two graduate students while they completed M.Sc. in environmental studies. This was his first attempt to supervise a graduate student following the strike.

In response to Onichino’s rejection, Onichino contacted Ghandi and Fox, stating that he wanted his case to be presented to Senate.  The GSC moved to submit a motion to Senate that looked to sanction the dean of graduate studies.

On Oct. 5, Dr. Robert Campbell, Mt. A president and chair of Senate, attended a GSC meeting where he stated his support for the Dean’s decision. He claimed that the University, as a corporate entity, had the final authority in accepting students. Campbell went on to ask the committee to withdraw the motion since Senate was not the appropriate place to deal with this kind of issue.

In response to Campbell’s request, the GSC voted to make the motion more general and to remove the sanctioning of an individual. Ghandi said the revised motion was submitted to Senate but never received admittance.

Ghandi responded by moving an independent motion to Senate. The motion asked Senate to uphold the GSC’s decisions concerning admission. It cited an academic calendar regulation that states, “the Committee will decide upon admission.”

On Dec. 1, Ghandi’s Motion three was brought to Senate. Campbell told Senate that he had solicited legal advice on the matter. He said the legal opinion had concluded, based on the Mount Allison University Act and bylaws, that the GSC did not have the authority that the motion suggested. Campbell resolved that the motion was therefore inadmissible and as chair he could not allow it in Senate.

A new motion was made to uphold the chair’s ruling to dismiss Motion three on the grounds that it was ultra vires. Members of Senate raised concerns over Campbell’s use of power and the lack of consultation and transparency in manner in which the unanticipated legal opinion had been sought out. The motion was eventually defeated, allowing Motion three to be discussed.

Members of the administration stated that documents within the academic calendar could not give power that was not grounded in the Mount Allison University Act. Following lengthy discussion, Senate eventually voted down the motion. The motion’s defeat formally dismissed Onichino’s prospects of completing a master of science at Mt. A.

Onichino plans to continue pursuing graduate studies, but is no longer interested in completing his studies at Mt. A. “I’m disappointed and disheartened,” said Onichino. “In the end, whatever seems to be the undercurrent between the administration and faculty and their relationship got the better of me.”