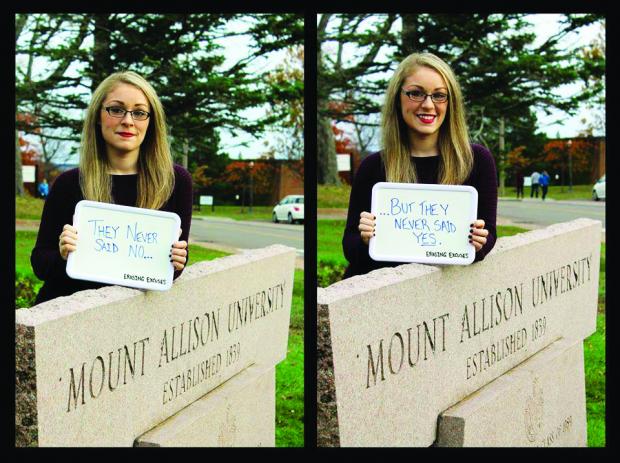 Mount Allison students are working together to change the discourse surrounding sexual assault. Students coming in and out of Gracie’s on Nov. 14 participated in the Erasing Excuses campaign supported by Mt. A’s Sexual Harassment and Assault Response and Education service, more commonly known as SHARE.

Students took their picture with an “excuse” for sexual assault written on a whiteboard.

“This project is different in that it’s very visual and compares what excuses are being made in society right now versus how we can change that to be more victim-positive,”  McLean said. The Erasing Excuses campaign is ongoing with McLean continuing to take photos at student request.

McLean, a former residence assistant of Edwards house, spoke to The Argosy about the importance of this type of discussion at Mount Allison. “I started getting involved with SHARE this year and I know how often Melody [Petlock] is called to a residence because of sexual assault type issues,” McLean said.

Sexual harassment advisor Melody Petlock said that sexual assault is a particularly relevant topic of discussion for a university community.

“This is the age group, statistically, that is most affected by this gender-based violence,” Petlock said.

The student hosts of the campaign’s photo shoot also had discussions with both male and female students who passed by about what it means to give consent as well as its importance.

McLean said that the role of blame in societal discourse needs to change.

“We have a habit of putting blame on the victim and I think that needs to change.”

“Talking about it is the best way to prevent it and to deal with it,” Petlock said.