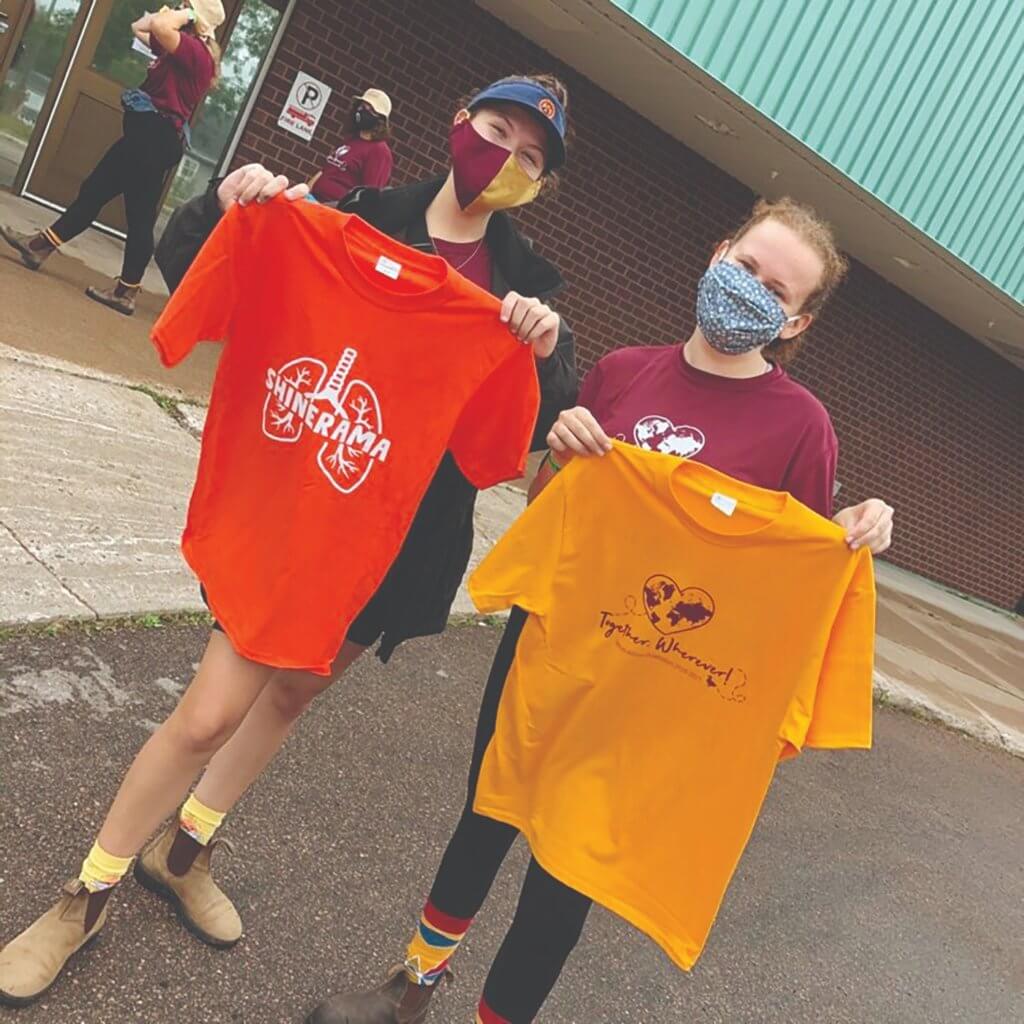 Shine Day 2020 looked a little different from previous years, but the annual event still drew in a lot of volunteers, excitement, and smiles. Emma Jacobson, fourth year international relations honours student and 2020 MASU Shine Chair, said, “We were so excited to be able to have the majority of the day in-person with all our Shine sites.”

Shine Day, which took place on Saturday, September 12, is a major event in the MASU’s annual award-winning Shinerama campaign. Since 1970, Mount Allison students have been working with Shinerama, Canada’s largest university fundraiser, raising money to support cystic fibrosis research and care. Cystic fibrosis is the most common fatal genetic condition in Canada, severely affecting the respiratory and digestive systems. Treatment is expensive, and as of yet, there is no cure. Since Shinerama began raising money for CF research in 1964, the median life-expectancy for Canadians with CF has increased from three to over fifty years of age.

“Shinerama and CF Canada do such important work, especially on the advocacy side attempting to get the government to make the necessary drugs and treatments available and accessible,” said Jacobson, who has been involved with Shinerama on campus since her first year.

This year, 90 volunteers gathered at 16 sites in Sackville and other nearby communities. While some sites had students washing cars for money, others had students collecting money from passers-by. In addition to the usual fundraising, this year’s Shine Day also featured a bottle drive and a trivia event. Jacobson said that this year’s event looked very different: “All of our volunteers wore masks, and we had several COVID precautions in place.” Despite these changes, students were excited, passionate, and energetic in their fundraising. 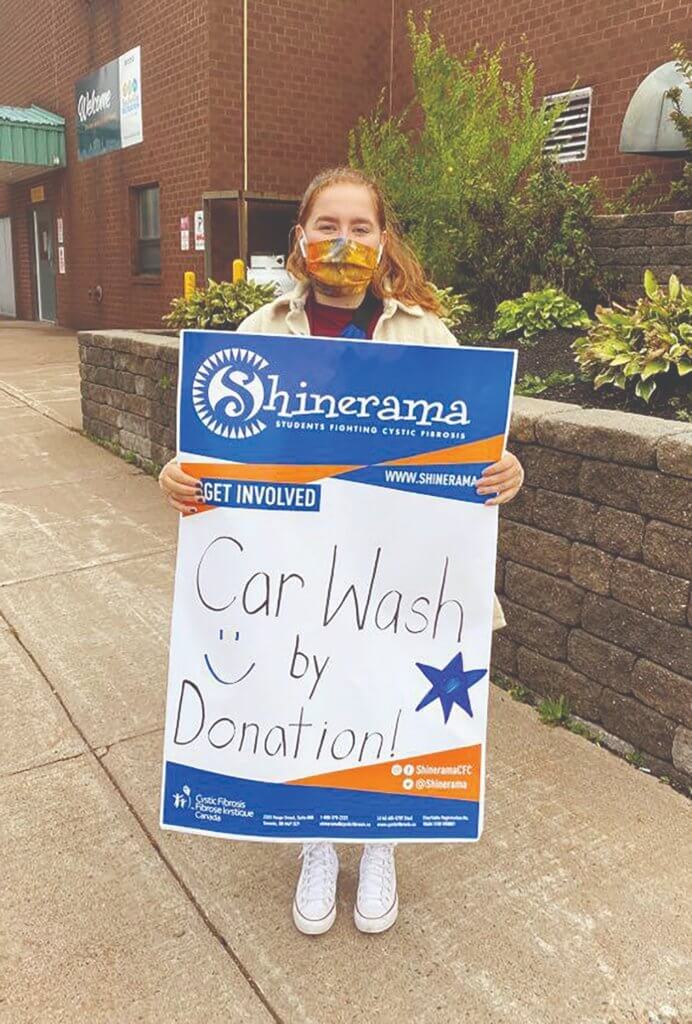 “I love the energy on Shine Day,” said Cassidy Coombs, a fourth year biology student who has volunteered with Shinerama for three years. This year, she was stationed at Patterson’s Restaurant. She enjoys the sense of community and volunteerism from students, and her favourite part of the day is talking to people making donations. “It is so neat to hear people’s personal experiences on why they chose to donate and how they have been affected by CF,” she said. “Still in 2020, we have diseases that have no cure. To hear about how Shinerama has positively affected the care and research for people living with CF makes me feel passionate to be a part of Shine Day.”

Ioana Pena, a second year psychology student, decided to volunteer at Shine Day for the first time “because it is a fun event and it is a part of Mount Allison’s experience.” Pena was collecting donations with a group outside of Sassy’s Pub. She said Shine Day is a great way for students to get involved in the community and meet new people. “My favourite aspect of Shine Day was making people smile,” she said.

The Sackville  community has always been very supportive of the MASU Shinerama campaign. Jacobson is thankful for this support, and believes it “comes partially from this awareness of what CF is and how donating to Shinerama can have a direct impact on the lives of Canadians living with it.”

Planning the logistics of this year’s event was tricky, and the Shinerama team initially thought the entirety of the campaign might have to be virtual. However, Jacobson is pleased with the turnout for the summer events and Shine Day. She also comments on the work of the Shinerama team, stating that they had already surpassed this year’s fundraising goal of $15,000. “I was surprised to see how many people donated,” admitted Pena. Mount Allison’s commitment to supporting Shinerama and CF patients, which garnered last year’s campaign the title of “Best Overall Campaign,” was evident this Shine Day.

But Shinerama at Mount Allison is a lot more than just Shine Day. The campaign has been very active over the summer as well. “We did a virtual cookbook, a bottle drive, reusable mask sales, and we were super happy to host our annual Garden Party in person, with the auction taking place virtually,” Jacobson explained. She added that the online fundraising page, another important part of the campaign, has been active over the summer and is still accepting donations. Coming up in the fall, Jacobson hopes to do some fundraising through events like trivia nights and reusable mask sales.

“Another important aspect of Shinerama,” Jacobson added, “is still the awareness and advocacy, so sharing information about CF with those around you and reaching out to those who can make legislative differences to ask them to do so.”

Shinerama’s work is more important than ever in the midst of this year’s pandemic. Those living with CF are at a high risk for something as simple as a common cold. “With COVID-19 being a respiratory disease, this further moves them into the high-risk category,” said Jacobson. She urges people to make sure to follow COVID-19 precautions and be considerate of those living with CF and other conditions. “You’re not just protecting yourself, you’re protecting those around you,” she said.

Jacobson is grateful for everyone who has been involved with this year’s campaign. “I just want to say a huge thank you to all of our volunteers and those who support us each year,” said Jacobson. “We can’t run this campaign without the community of people who support it and make it possible.”

Information and updates about the MASU Shinerama campaign can be found on their Instagram (@mtashinerama) and Facebook (MASU Shinerama) pages. Online donations can be made to the Mount Allison page at shinerama.ca until mid-January.

Mira Donaldson
Mira is a contributor to the Argosy.