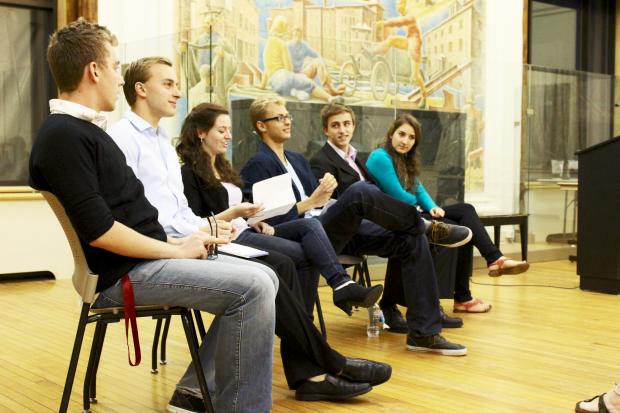 The speeches were held in Tweedie Hall on September 19, and lasted for three minutes each. The event concluded with a question period for audience members.

Murphy spoke first, and took a humorous tone with his speech. He delivered his speech in a Scottish accent, and shared a comical anecdote about “a monk who lived here at Mount Allison before it was a university.” Murphy then outlined his qualifications, saying he was involved in student government throughout high school, and was elected “prime minister” in his final year.

Roy stated her first goal as a councillor would be “to make our voices heard as first-years.” Roy also emphasized her desire to “continue helping others,” and that she thinks joining Council would “be a good way to do that.”

St Louis emphasized the natural benefits of “a small-school experience,” explaining that “these experiences are made, they don’t appear out of thin air.” St Louis said his goal, and the responsibility of MASU, is to make sure students “get the experience they paid for.”

MacRae said his past experience as chair of his high school’s event committee and president of his student council prepared him for a position as councillor. He promised to “communicate with the residents of North Side,” in order to better inform them of MASU events, and to convey the opinions of students to MASU.

Baumeler explained she was a member of her high school student union and was active in clubs and event planning. She said she wants to represent North siders to “find the necessary answers to their questions, and the solutions to their problems.” She also mentioned the importance of “transparency and openness” by MASU.

During the question period, MASU President Melissa O’Rourke asked the candidates if they could name a project that any one of the MASU Executive had included in their mandate for this year. St Louis noted the planned improvements and “fine tuning” of the now operational used online bookstore. Murphy also named a goal, mentioning the improvement of safety on campus, which falls under the Campus Life portfolio. The remaining candidates could not name one of MASU’s mandate goals for the upcoming year.

MASU Vice-President, Academic Affairs Ryan Harley asked the candidates to consider a hypothetical situation in which they had to vote with their conscience, or with the opinion of their constituents. After the candidates’ initial complicated responses, Harley asked them to offer simple answers. Murphy, Wooley-Berry, and Roy all elected to vote with their conscience, while MacRae and Baumeler chose their constituents.

St Louis took the question another direction, stating he would “vote for what is right.”

The election results are expected on September 26.