Students’ union won’t push Mt. A to divest after council votes no 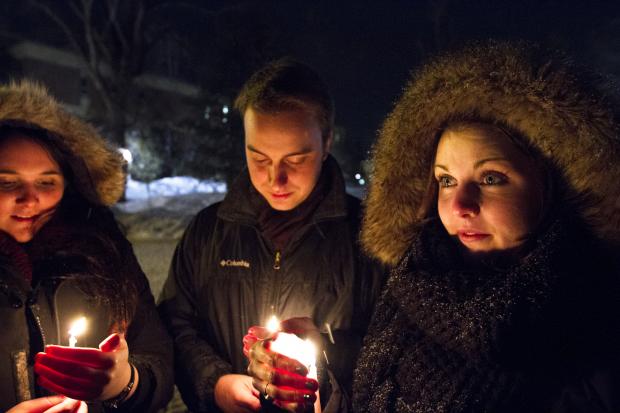 After a heated debate, MASU rejected a motion to support student-led lobbying efforts to convince the university to drop its investments in fossil fuels. Only four councillors voted in favour of calling on Mount Allison to drop the investments.

In light of the union’s decision, members of Divest MTA organized a candle-lit vigil outside of the Mount Allison chapel, held on the night of  March 17.

Lauren Latour, one of Divest MTA’s organizers, said the candles were for those killed by a cyclone this week in Vanuatu, those in Northern indigenous communities who have died or lost their homes as a result of climate change, and those who live in climate change-affected communities around the world.

“I feel that the decisions made by our MASU councillors – our representatives – were not made to reflect our opinions as activists, students, and as their constituents,” said Latour.

There were about 60 people gathered outside of the chapel, many wearing the orange squares handed out by Divest MTA.

The motion, presented by the union’s sustainability committee, was first introduced last week. Following some concerns from councillors regarding the language of the motion, president-elect Dylan Wooley-Berry put forward a recommendation to consult with the union’s policy and research officer, Noah Entwisle.

“When I met with the PRAO and the president, we were able to refine the motion so that some of those ambiguities were no longer present,” said Alex Lepianka, off-campus councillor and Divest MTA organizer. “My hopes were that in light of these refinements to the motion, council would have been a lot more open and would’ve entertained a productive dialogue about the spirit of the motion as intended.” North side councillor Brian Tulle, vice-president campus life Andrew Johnston, social sciences senator Cora MacDonald and Lepianka were the only four councillors to vote in favour of the motion. Sixteen councillors voted against the motion. Board of Regents representative Ian Nason abstained.

“Students are often the catalysts for change, and we need to be getting the conversation rolling,” said MacDonald. “We are going to be the leaders 10 years from now.”

“In 10 years, 20 years, 30 years from now, do I want to look back and think that I was holding back something that was the right thing to do from happening, or be ahead of the change?” said MacDonald.

In an email sent to The Argosy, president Heather Webster said she was “very impressed with the work of Divest MTA and the report they presented to council.”

“I understand that as the president of the MASU, you have a responsibility to go talk to the administrators and to hear them out,” said Divest MTA organizer Emma Jackson. “But at the end of the day I don’t think that that should be impacting what they’re supporting.”

“Any campaign at Mount Allison should look to Divest [MTA] for how to do it,” said Black.

Nason raised some concerns about the way in which the motion was presented.

“It does really suffer from a confirmational [sic] bias,” said Nason. “They did lend not an ear to the other side and they did not include any counter-arguments in their report.”

The report, which was quite technical in nature, argued divestment from fossil fuels was in the best financial interests of the university.

Lepianka said, “The presence or lack of a specifically academic body of knowledge weighing in on an issue should be no inhibitor to activism.

“Coupled with the agency and think tank-published reports on the effects of divestment, I think that experiential evidence of presently divested cities, churches, and universities holds value,” said Lepianka.

Latour said that Divest MTA plans on taking the issue to referendum next fall.

“I would be very surprised if we came out of a referendum without the majority of students voting in support,” said Jackson.

“If anything, the student union and the university taking a side on this issue is going to do very well for the students that are coming in next year,” said Jackson. “The support is only going to grow with new students coming in.”