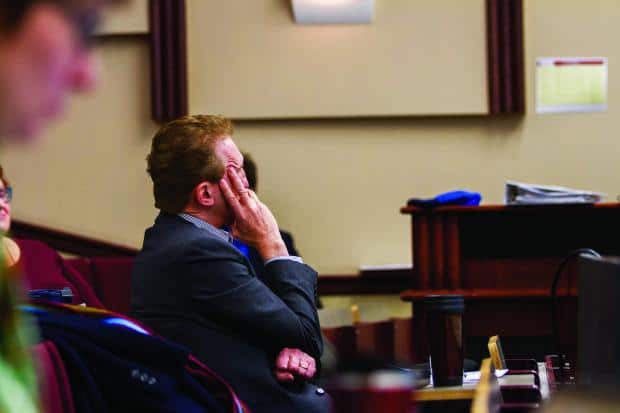 Mount Allison is scrambling to plug an almost $1-million hole in its budget after the New Brunswick government announced its plans to freeze tuition and operating grants to its universities.

The university’s administration had to throw out the draft budget it had prepared for an April 7 debut in a senate meeting.

Now, without $982,000 in tuition and grant funding it had planned on, Mt. A is racing the clock to cut its $45-million dollar operating budget down to size.

“The budget was prepared on what turned out to be false assumptions that the tuition and funding framework that had been constructed in conjunction with the previous government would be honored,” said president Robert Campbell in his opening remarks.

Next year would have been the fourth and final year of an agreement with the New Brunswick government which allowed annual 2 per cent increase in provincial funding and the possibility of a tuition increase under the cap.

Under this agreement, the proposed budget would have fixed the $1.3 million shortfall Mt. A quietly announced in February.

According to the Liberal government, this decision was made so that universities “become more focused and efficient in delivering their important services to New Brunswick students.”

But the response from students, faculty, and administrators at Mt. A has been largely negative.

Economics professor Stephen Law cautioned the administration about its handling of sabbatical replacements, which he said have fallen from about 90 per cent to 30 per cent in the past three years.

“The current version of sabbatical replacements is at 15-year-low at this university, so I would think that there is not much more to squeeze out of this particular component,” Law said.

Only five of the 17.5 professors taking sabbaticals next year will be replaced by the university.

Vice-president of Academic Affairs and Provost Karen Grant said that the difficult times the university faces requires these cutbacks.

“If we were flush with cash, maybe we would say that it would be preferable to hire term and sessional appointments or permanent instructors, but I don’t think we have that luxury at the moment,” Grant said of the sabbatical replacements.

Another concern raised by faculty members was the hiring of a vice-president student and international affairs. With present vice-president Ron Byrne leaving at the end of the year, some at the meeting suggested the administration delay the search to help balance the budget.

Vice-president administration Robert Inglis said that the process, for which the university has hired a headhunting firm, could cost anywhere between $50,000 and $80,000. The current budget proposal includes the salary for the position.

The administration will host a town hall meeting tentatively scheduled for April 16 at which it will present changes to the budget.