Theatre races the clock to raise cash and stay open 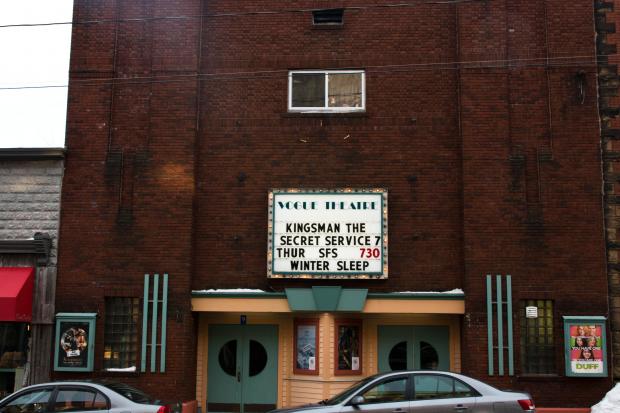 After decades of film screenings in the heart of Sackville, the Vogue Cinema is under threat of closure due to rising operation costs and growing debt.

In an effort to save the business, current owner Jeff Coates created a Kickstarter online fundraising campaign with a goal of $100,000 earlier this year. The money will help fix the Vogue’s leaking roof, repair water damage, and pay off loans.

“I have successfully paid off some small loans but still have a large commercial loan and a significant balance owing to the private investor. Changes in the economy have forced the private investor to no longer be able to carry this loan and has asked for it to be paid in full,” Coates wrote on the Vogue’s Kickstarter page.

The cinema’s roof has also deteriorated so much that it is beginning to affect the inner auditorium.

At press time, the campaign sat at just over $20,000 and will end next week. Coates said he remains optimistic about the project.

“It’s all or bust,” said Coates. “If the project fails as far as the Kickstarter goes, there are still other fundraisers going on. We’re hoping that if it is unsuccessful, people will say, ‘We still want to give our donation,’ and they’ll reach out personally.”

“Local businesses have come forward with different fundraisers of their own,” said Coates. “Some are complete, some are still in motion and some are yet to happen.”

Lucas Hicks, the creative director of Sappyfest, organized a benefit concert at Thunder & Lightning in late January which raised over $500 for the cause.

“The Vogue is an important community gathering place,” said MacKinnon. “It’s not only a screen for movies, but an important cultural cornerstone of Sackville.”

MacKinnon says all the performers at the benefit have a connection to the town and its culture, and as a result they are donating their time and effort to support the cause.

“It’s a joy to show films in a real theatre with communal spirit,” said Thaddeus Holownia, an organizer of the Sackville Film Society and a professor in the Fine Arts department at Mount Allison.

Holownia said the Vogue is a central institution in Sackville’s community and its loss would leave a void.

Holownia said he is optimistic about the prospects of the overall campaign.

“I don’t think the Vogue is going to close. I think there is enough of community spirit that through hook and crook, whatever is going to be necessary to keep it afloat is going to happen. People are going to come together and we’ll figure out a way.”

Coates said he is committed to keeping the patrons of the Vogue informed about the progress of the fundraisers.

“I can’t just ask for the money and wait and see. I have to continue to engage and respond,” said Coates.

Kickstarter operates on guidelines on which project creators set their own goals and deadlines, and backers can choose to pledge at their will. If the project is successful in reaching its funding by the established deadline, backers are charged for the pledges. However, if the project falls short, no one is charged and the creator receives nothing.

“I do have a deadline for part of the funds for March 31, so if it does fail, I have to find another avenue for those funds then. We’ll cross that bridge when we come to it.”