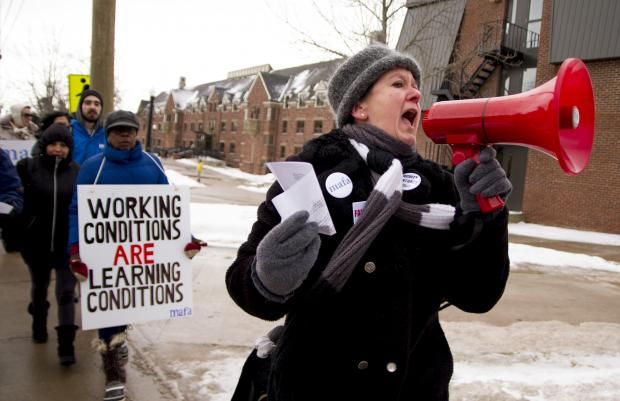 The Mount Allison University administration is making public promises that neither the provincial government nor the faculty association are prepared to guarantee.

After a great deal of confusion surrounding the end of the strike, the administration is insisting that classes will resume Monday, but the Mount Allison Faculty Association does not agree that this is a certainty.

The parties will meet tomorrow to negotiate the terms of binding arbitration and back-to-work protocol with provincial mediator Rick Merrill.

MAFA have said they would not call off the strike until these outstanding issues have been resolved.

MAFA is proposing “interest” arbitration, in which an arbitration board addresses each contested issue individually.

At a press conference this afternoon, Mt. A vice-president Karen Grant explicitly told media that “Classes will resume on Monday February 17.”

“As an important starting point, both parties expect classes to resume on Monday, and they both expect to use binding arbitration to resolve outstanding issues,” Grant said.

“It’s not anything that can be guaranteed. It’s not certain until we have negotiated the agreement, that needs to be in place in order for us to return to classes,” MAFA President Loralea Michaelis told The Argosy.

“Until we have concluded negotiations on [binding arbitration and back-to-work protocol], we don’t have an agreement to end the strike,” Michaelis said.

“We certainly think it’s a reasonable prospect that we can settle the strike in time for classes to begin on Monday, but it’s not a certainty,” she said, stating that an expectation was not equivalent to a guarantee.

Minister of Post-Secondary Education, Training and Labour Jody Carr confirmed that both sides would be meeting with the provincial mediator Saturday.

However, Carr would not confirm that students should expect a return to class Monday.

“[It’s] completely up to both sides, and their prerogative, to reach an agreement and make that announcement,” Carr said.

“Any details of a potential agreement will be up to both parties to announce and to agree to,” he said.

“Our role has been to intervene, to provide the assistance of meditation, and to encourage both sides to come together.”

“We are encouraged to know that both parties have agreed to meet tomorrow.”

Carr said he has not ruled out issuing back-to-work legislation, but it remains a “last resort.”

With files from Richard Kent.