We don’t have a planet B 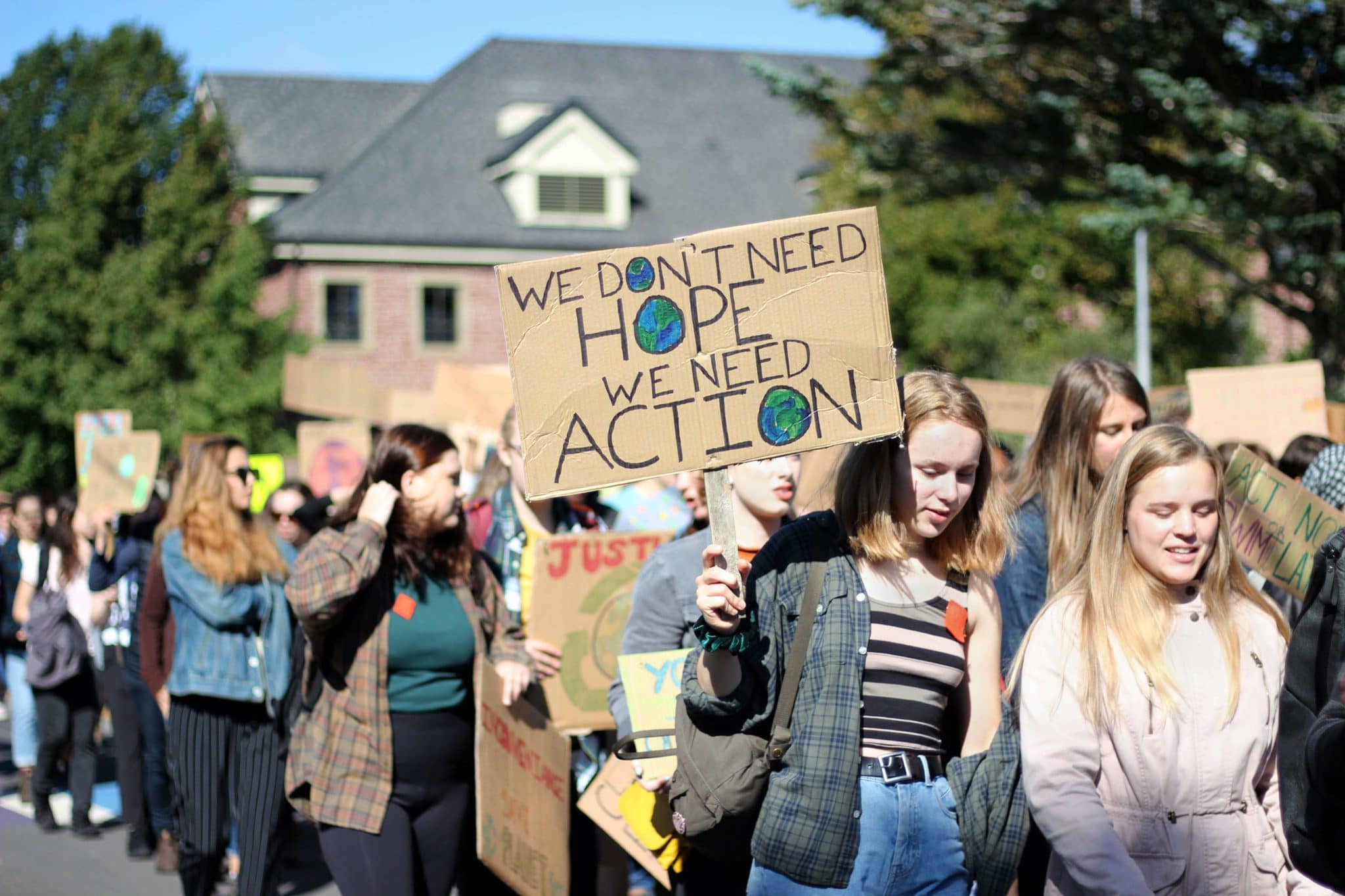 “Building economic systems where natural resources are commodified and profit is prioritized over human well-being is not sustainable,” said Helen Yao, a representative of Zero Hour, which is a youth-led global climate justice movement. “Committing genocide on Indigenous peoples and erasing their climate activism is not sustainable. Ignoring the part fossil-fuel companies play in our political systems and our education institutions is not sustainable.”

The day began with students from Tantramar, Marshview, and Salem leaving school to join the march. They joined Mt. A students in Gracie’s Cafe on the University campus to make signs to carry during the march.

Students gathered at the academic quad for a rally before the march began. Community members and students marched through campus, down York Street and onto Main Street.

The speeches and demands were delivered at Bill Johnstone Memorial Park. Here, anyone who wanted to discuss climate change was invited up to the microphone to talk about what they felt was important.

“I am here today for the same reasons that you are all here – to ensure we have a sustainable future and a habitable planet,” began Yao. “I speak on [Zero Hour’s] behalf because I want you to walk away from today’s march understanding that the climate crisis is not an independent issue.

“When we are talking about a just transition to a sustainable way of living, we must address the real roots of climate change,” said Yao. “We understand the mechanisms, but the human conditions that enabled it are more complex yet just as essential. I am talking about patriarchy, racism, colonialism, capitalism, and all the ways we have chosen to systematically exploit the land and the people.

“We talk a lot about Greta Thunberg, but how many of you are aware of all of the Indigenous water protectors serving around Canada and even speaking to the UN?” said Rowan White, a first-year Mt. A student and Indigenous water protector. “If we’re going to take any sort of action to fix the climate we need to start with the protectors of the land. This is not acceptable and you need to hold the government accountable for everything they’re saying. We are not going to stand for any more false promises.”

White also specifically addressed Mt. A about their acknowledgments of the Indigenous land we are on. “Mt. A loves to say it’s a liberal college, that we value and include everyone,” they said. “But your land acknowledgment means nothing if you’re not going to take any direct action. Anyone can say they support their Indigenous students, but putting all of your money into fossil fuel doesn’t match your words.”

“I love the Earth,” said a younger student who took part in the strike. “Or at least how I think of it, when I think of the Earth. I think of the grass, the trees, the fall when everything turns orange and red. The things that I don’t think about is the climate change, the people who are denying it. And it’s amazing that in Sackville, this many people from this tiny place are here supporting all of these things.”

“Every generation has a struggle,” said Graeme Stevens, a third-year Mt. A student. “[For] our grandparents, it was the Second World War, our parents it was nuclear weapons and for us it is climate change. This is a crisis. This is something that we have to address. We must. It is coming.”

“I wanted to start off by thanking all the youth who are here, especially everyone who’s in middle school and high school. It is really, really inspiring to see,” said Adele Marsland, a third-year Mt. A student. Marsland also encouraged those eligible to vote in the Oct. 21 federal election to do so.

Marsland ended with talking about how we can make differences in our everyday lives to help mitigate climate change.“It’s not [with] 100 people or 1,000 people where the change starts. The change starts at home with one person recycling, and one person thinking about reusable sources. Where are your recyclables going? What are you using for transportation?”

Ian Soutar, the Canadian Young Greens coordinator was visiting Sackville, came out to the strike to talk about voting in the election. “There’s a whole lot of statistics out there about young people [showing] that we are the most active in every measurable way, whether that’s signing petitions, going to rallies, getting up and speaking in places where your government is at,” he said. “The only places where we fall short [are] voting. Even if you can’t vote, you can convince 200 other people to go out and vote. Every vote matters. Get out to the polls, tell your parents, tell your family, tell your friends.”

Soutar also spoke about ways youth can vote even if they are not from this riding: “If you’re from somewhere outside this riding you’re actually allowed to vote here if this is the place where you’re spending your time.

“Do not miss this opportunity,” Soutar said. “We are running out of time. This may be our last election to do something serious.”

“Humans are a race of great intelligence,” said Jane Coates, a 14-year-old Tantramar High School student who came out to the strike. “We have problem-solving skills that no other animal possesses. We’ve created machines designed to carry us to great distances and great speeds.… [Our greatest trait] is our ability to adapt [to] what life throws at us. We’ve learned to adapt to this small world where plastic dwells in our oceans instead of fish, and in some parts of the world clean water becomes a privilege not a right.”

Coates also presented some statistics about the state of the planet: “Plastic pollutes our oceans 1.5 million times every hour. We chop down 27 soccer fields’ worth of forest every minute.”

Derrick Dixon, who runs the clothing store Hounds of Vintage, shared his thoughts about how the fashion industry affects the planet. “The fashion industry is the second most toxic industry to our planet,” he said. “For every pair of jeans, [it takes] 7,500 litres of water. It takes three years of one person’s drinking water to make one T-shirt.… There is a desert of microplastics on the bottom of the ocean, and do you know where those microplastics come from? Your polyester clothing.”

He then encouraged other businesses to start their own tree-planting initiatives in collaboration with Canadian Forestry International, like he has in Sackville. “All the trees are going into land locally, [and] that is protected from industrial logging,” he said. “There’s 292 native trees going in the ground right now, thanks to you guys, in the Tantramar region.”

Kaelan Ruddick, a recent Mt. A graduate who works in the experiential learning office, discussed our generation’s role in climate change and in the upcoming election. “[What] I’ve been hearing and seeing and reading a lot this campaign season is we, 18 to 25 year olds are being called the next generation, or the future generation,” she said. “I think that’s super misleading. Because we are this generation. This is our time to vote, this is our time to take action. What we do now is going to predict how the climate catastrophe unfolds.”