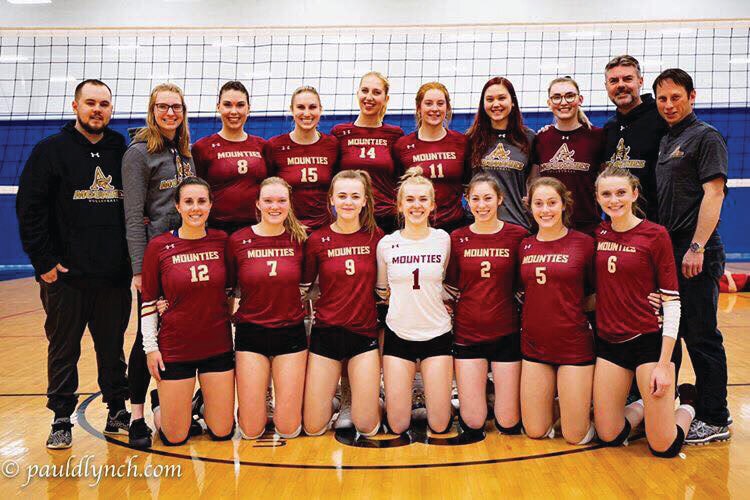 The Mount Allison women’s volleyball team continued their winning streak this past Saturday at the University of New Brunswick, winning two out of three sets. The team has been undefeated so far this season with a total of six wins.

With one game left this semester at Holland College the team is feeling confident. “Being undefeated is just a bonus at this point,” said new head coach Robbie Crouse. “Getting everyone to buy into the winning culture and have every girl on the team believe that we are the team to beat is the most important thing.”

“The transition to the team has gone really well. Everyone was and still is so welcoming to the rookies, and makes sure all are included,” said Amanda MacBain, a first-year player. “With positive feedback and constructive criticism, many players are getting developed and ready to compete.”

Last year’s team made it to the championship rounds at Holland College but lost to Mount Saint Vincent. This year’s team believes they can make it even further.

“I think one of our key components this year is our team energy,” said Sophie Landry, a second-year player. “We are always the loudest on the court and that makes a huge difference in the sport of volleyball.”

Originally from Charlo, N.B., Landry assisted in the team’s win over King’s College on Nov. 16. She was named Female Athlete of the Week by Joey’s Restaurant for the week of Nov. 11-17. With 10 kills and 13 digs, Landry worked for the award.

“A big contribution to the team’s kickoff success has to be the coaching and the culture,” said MacBain. “Since volleyball is such a mental game, we have been working to improve our ability to focus and be able to push through our ruts during games.”

“We have an amazing coaching staff,” agreed Landry. “They’re all people who know their volleyball super well and they’re all so supportive.”

Over the summer, the women’s team named Crouse the new head coach for the upcoming season. Originally from Stewiake, N.S., Crouse has led the team through a very impressive season so far. He says, however, that he can’t take all the credit.

“The team has taken great strides in changing the culture of the program,” he said. “As a first-year coach I feel pleased but not surprised at our immediate success, but our goal is still to raise a banner at the end of the year.”

As the team approaches their next game, Crouse added that “Part of the reason for me taking this job was the young group who were hungry for change and to be winners. I’m blessed to have a group of girls with the same mindset and passion to win as me and the rest of the coaching staff.”

The team will play Holland College this Saturday, Nov. 30 in Charlottetown.