Wooley-Berry to stand in run-off election 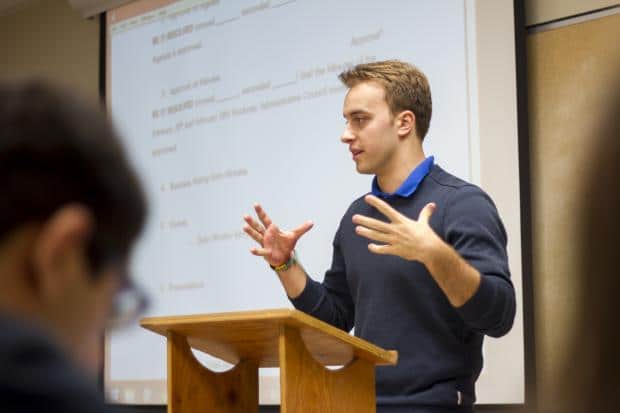 The Mount Allison student body is headed back to the polls. A run-off election featuring a yes/no ballot to elect Dylan Wooley-Berry as MASU president was approved by the student’s administrative council. The campaigning began Feb. 6 with voting to be held on Feb. 13 and 14. The run-off election was prompted by a complaint filed to MASU’s ombudsperson on Jan. 28.

The complaint concerned an error in the online voting system that left the results of the presidential election up in the air. MASU’s operating procedures call for an optional preferential voting system. Under the union’s election rules, students should be able to either vote for just one candidate, list any number of candidates in preferential order or abstain. The Jan. 26 and 27 election conducted through an online service allowed for students to list the candidates in their prefered order or abstain, but  did not allow voters to vote for only one candidate. This made the preferential voting mandatory rather than optional.

The discrepancy would not have affected the results if one of the presidential candidates got the 50 per cent plus one of all votes necessary to elect a MASU executive in the first round, but an abstention rate of 19 per cent left neither candidate with an initial majority. In the second round of voting, Wooley-Berry received a majority, because every vote for Riley Thompson was transferred to him. Since students were unable to vote for just one of the presidential candidates, it is not clear if Wooley-Berry would have received a majority without the glitch.

“The ballot not being set up properly was a massive oversight on the part of the CRO,” said Wooley-Berry.

The purpose of the run-off election this week is to see if over 50 per cent of voters will support Wooley-Berry for president.

“I was very aware of the possibility for a yes/no vote before I was elected the first time,” said Wooley Berry. He said the concern about the inability to abstain in the second round of voting was brought to council the day before polls closed. “I recalled even when I was voting myself ‘this isn’t right.’”

Another complaint, filed on Jan. 30, contained photo evidence of Wooley-Berry’s consumption of alcohol at an improv comedy event at the Pond on Jan. 14. Chief Returning Officer Rayan Bouhlel interpreted this as a violation of an election rule restricting alcohol use at campaign events, and retroactively disqualified Wooley-Berry. Bouhlel had approved Wooley-Berry’s and Riley Thompson’s participation in the event on the condition that they abstain from consuming alcohol.

MASU issued a press release on Feb. 9, revealing decisions made behind closed doors during a Feb. 5 emergency council meeting. The press release included the following statement from president Heather Webster: “On the issue of alcohol, the improv event is not organized by a candidate and is at least arguably not a ‘campaign event.’”

Operating Procedure V – Elections provides that campaign events ‘shall not involve alcohol.’ It does not say that candidates cannot drink, or attend events where alcohol is being served. The CRO’s authority is limited to enforcement of regulations in accordance with Bylaw III and the Operating Procedure V – Elections policy. There is no authority in the CRO to disqualify a candidate because they are seen consuming alcohol.”

Section 8.9 reads, “Campaign related events shall not involve alcohol.” The penalty for violating section 8.9 is “disqualification pending investigation,” as outlined in section 9.2 iv.

Prior to the in-camera portion of the Feb. 5 meeting, Bouhlel’s disqualification of Wooley-Berry would have resulted in reopening the presidential position for new candidates to run and having a whole new election. Following this, an email circulated to councillors calling for council to “unappoint” Bouhlel, but council has not discussed this further in the following two meetings.

Bouhlel gave a brief report in the public portion of the emergency meeting.

“[Elections] were great,” Bouhlel said. “We had a wonderful turnout.”

Council then asked guests to leave while they discussed the ombudsperson reports. After the meeting it was announced that Wooley-Berry would have a yes/no vote and was no longer disqualified.