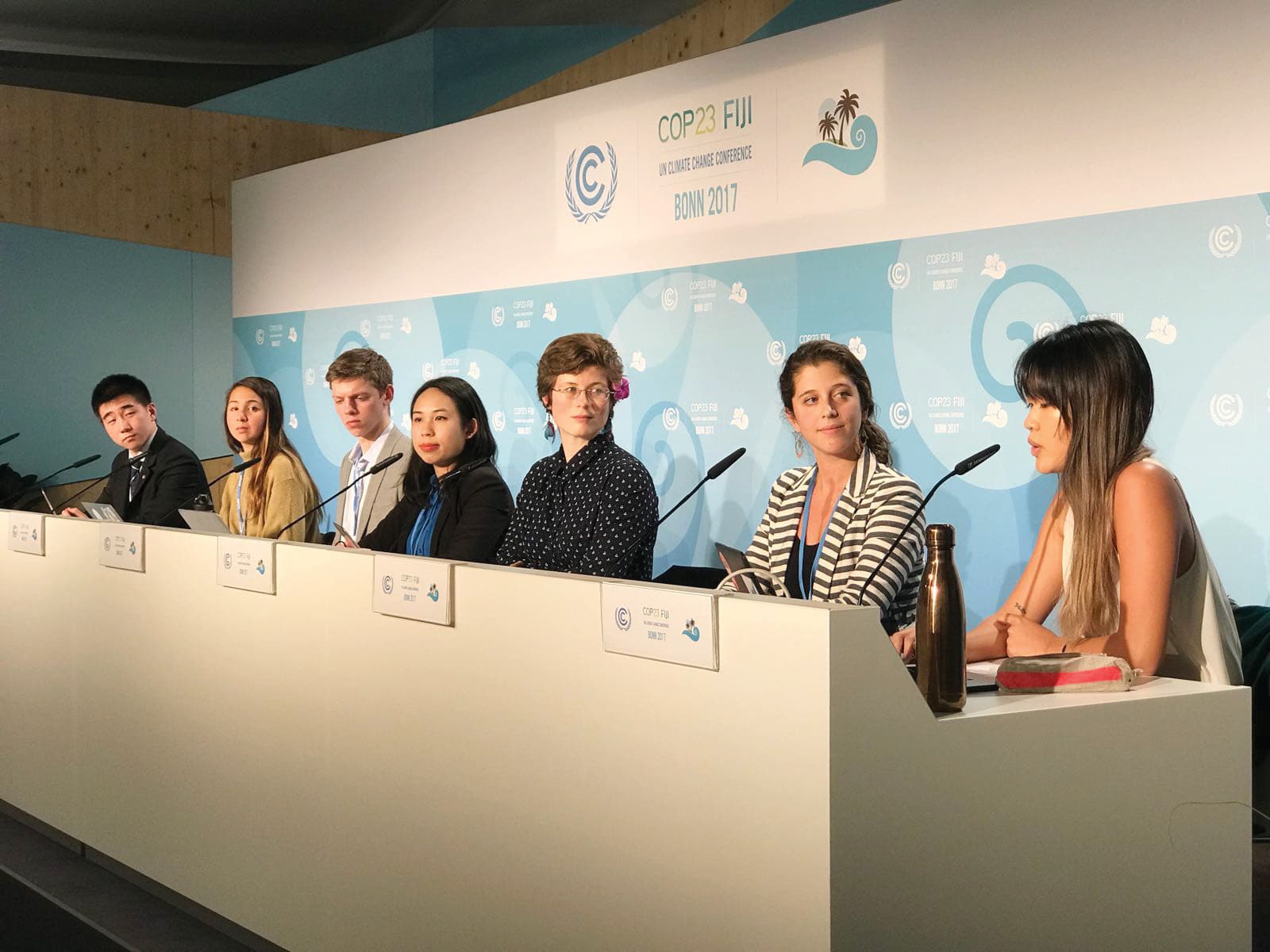 Emma Bush: Can you tell me a little bit about what COP is?

Tina Oh: The Conference of Parties is a climate change conference under the United Nations’ Framework Convention for Climate Change (UNFCCC). It is a two week long (often longer) conference where parties all over the world negotiate climate agreements and commitments. In past COPs, countries signed the Kyoto Protocol and the Paris Agreement. It is also a space where countries are able to talk about adaptation, capacity-building, climate finance, mitigation and technology in an almost-near universal way.

EB: What is significant about COP 23 specifically?

TO: COP 23 is also known as the Pacific COP by the Government of Fiji. It is the first time that a Pacific Island nation is presiding over the conference. This is very relevant because these islands are composed of some of the world’s most vulnerable countries to climate change, yet contribute the least. Fiji set the tone for this COP by prioritizing loss and damage (the losses and damages that a developing nation incurs because of climate change) and adaptation. Obviously, this wasn’t well-received by many wealthy nations as it puts responsibility on them as big emitters. While the Fijian Presidency is leading this COP, it was held in Bonn, Germany, because Fiji does not have the infrastructure to accommodate such a large-scale conference. They were also hit terribly by Category 5 Cyclone Winston in 2016, which they are still recovering from.

COP 23 is also the second year that the Paris Agreement – an international commitment to keep global temperatures under two degrees, aiming for 1.5 degrees – has entered. It reaches for higher ambition, especially pre-2020 goals. COP 23 has set the stage for COP 24 (in Poland) by use of the Talanoa Dialogue. Talanoa is a Pacific concept of constructive discussion, debate, storytelling and non-state actor involvement.

EB: Can you tell me about how you were chosen to be a delegate for this conference and where other representation comes from in the country?

TO: I was a delegate with the Canadian Youth Delegation (CYD) to COP 22 in Marrakech, Morocco. The CYD is a portfolio under the Canadian Youth Climate Coalition (CYCC) which aims to be a justice-oriented organization. For COP 22, I was encouraged to apply, to which I was successful. Unfortunately, the CYCC has since fizzled out and is taking an indefinite time to restructure the organization. However, it was still felt that youth representation (heavily from a justice standpoint) was needed at COP 23 to keep the Canadian government accountable to their international climate agreements. Through connections with Climate Action Network Canada (CAN-Rac), my name was independently recommended for COP 23.

Every year the geographical representation to COPs vary. This year, the CYD delegation composed of two folks from British Columbia, one from Quebec and myself.

EB: What was the most exciting thing that happened at the conference (so far)?

TO: One of the most exciting things for me was the creation of the first Gender Action Plan (GAP) under the UNFCCC. The GAP was put forward by the Costa Rica government and was 12 years in the making. It seeks to address policies that recognize that femmes are disproportionately impacted by climate change.

I followed the negotiations for the informal consultations on gender and climate change quite extensively and the GAP was the product. It is an incredible document that empower femmes and seeks to address the inequalities they face while highlighting the need to support their resiliency to climate change. While the document was watered-down by other parties (particularly the United States, Australia, New Zealand and Canada), it sets an important precedent for the future.

EB: What was the most frustrating thing that happened at the conference (so far)?

TO: I have to mention that COP in itself is one of the most frustrating and disappointing spaces that I have ever been in. It is incredibly exhausting to follow negotiations for 12+ hours day for 14 days, especially under a broken eurocentric system like the United Nations. That doesn’t mean the UNFCCC is not relevant. The people whom are negotiating and have immense power backing them are from developed nations that have resources to adapt and mitigate the effects of climate change and/or are not on the frontlines of climate change.

Specifically, at COP 23 it was extremely disappointing to see Canada side with the Umbrella Group, composed of some of the world’s wealthiest nations like USA, European Union, Australia, etc., on various negotiations like loss and damage and financing. They had a big part in watering down, deleting references and obscuring in the loss and damage draft-text.

EB: What changes do you think this conference will bring about?

TO: We have to be realistic that top-to-bottom change is not effective in empowering and creating resiliency in our communities. The UNFCCC and COP 23 is just a fraction of the mechanisms needed to address climate change. Canada and the UK announced a coal phaseout under the name Powering Past Coal Alliance. It bridges the solidarity around nations and cities that plan to end the use and production of coal, which is one of the worst fossil fuels.  While this announcement is necessary, we have to recognize that decisions like this are the result of decades of grassroots activism and pressure from civil society.

EB: What are you looking forward to in future COP conferences?

TO: Next year is a Global Stocktake year, meaning that COP 24 will analyze how countries are doing collectively in realizing the Paris Agreement aims and ambitions. I am looking forward to seeing how the Polish Presidency (host of COP 24) will work with the Fijian Presidency to implement the Talanoa Dialogue. Interestingly, COP 24 will be hosted in coal country in Katowice, Poland.

EB: Coming back to Mt. A, what do you hope to share with the University community from what you have learned at this conference?

TO: I am a divestment organizer, and every COP I attend encourages me to see the University commit to divestment. The UNFCCC and COPs are useless without meaningful and tangible concurrent work being done alongside of it by all spheres of civil society, including institutions. Divestment is an act of solidarity, and we can’t forget how important solidarity has been in former divestment campaigns like the anti-apartheid South Africa movement. Universities led that movement, and it created real solidarity to the philosophies of what we are learning to action. It’s time that we honour that legacy and build solidarity with those most affected by the fossil fuel industry.

EB: Do you have any final thoughts or comments that you’d like to make that I haven’t touched on?

TO: Canada is pathetically behind its 2020 and 2030 targets. If Canada is to claim that it is a “climate leader”, it needs to back those words with real action. We cannot continue to make international commitments when it was never our intention to fulfil those promises in the first place. Canada has to move beyond a profitable lens of international negotiations, especially when billions of lives are struggling to survive. The negotiations around Pre-2020 ambitions was a very contentious topic at COP 23. Sitting in these boardrooms and hearing the voices of countries like Antigua and Barbuda saying that they cannot go through two more hurricane seasons was so heartbreaking. Canada cannot continue to maintain the status quo; we need great ambitions, now.