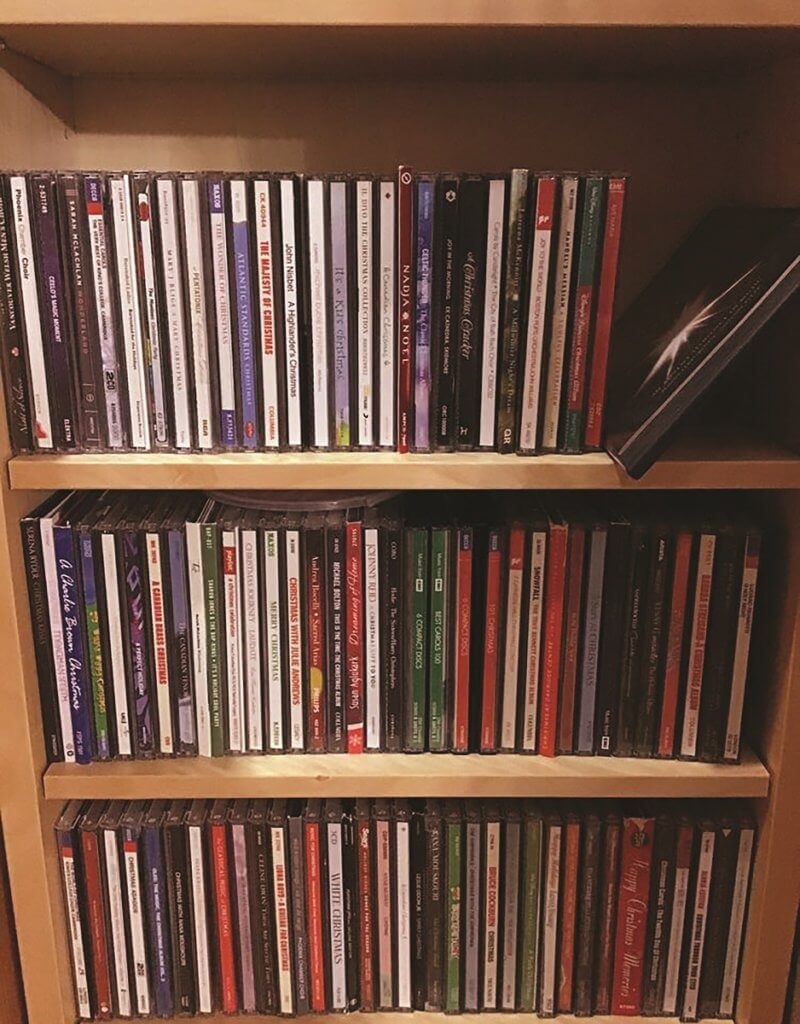 I love holiday music. As soon as November 12th strikes, my parents put on the holiday music, and keep it on as late into the New Year as possible. Over the years we have gathered quite the collection of Holiday CDs (94 and counting to be exact). Holiday music just makes me feel warm, cozy, excited, happy, and sentimental — all of the things I like to feel around the holiday season; the best part is that every year there are always new holiday albums being released! I could write an entire article on some of these albums on their own, but to keep things simple I will be giving a very short review of each of the twelve most notable holiday albums that were released in 2020. Remember, I am not saying that this is a definitive ranking of these holiday albums from worst to best; this is simply my personal ranking.

In last place, we have Carrie Underwood’s My Gift. It is a boring, run of the mill Christmas album that any young-ish white Christian woman could have released. If you’re into that kind of thing, you’ll probably like this album, but it is not for me. Standout track(s): “Hallelujah” featuring John Legend (no, not Leonard Cohen’s “Hallelujah”), “O Holy Night.” 2/5 stars.

Is the soundtrack to the Netflix original film Jingle Jangle: A Christmas Journey technically a Christmas album? Maybe not, but it is the soundtrack to a Christmas musical so I am including it! This album features some incredible vocal performances from Anika Noni Rose, Keegan-Michael Key, and others. However, a lot of these songs end up kind of sounding the same, and out of the twelve songs featured on the soundtrack, I really only listen to six consistently. Standout track(s): “This Day,” “Magic Man G,” “Make it Work.” 3.5/5 stars.

The Goo Goo Dolls It’s Christmas All Over made a bold move in including a lot of original songs, and their original songs are some of the highlights of the album! Not totally my cup of tea, but definitely an enjoyable listen. Standout track(s): “Christmas All Over Again,” “Shake Hands with Santa Claus,” You Ain’t Getting Nothin’.” 3.75/5 stars.

This is the part of the list where lots of albums will have the same or similar ratings out of 5, so it was very hard to put them in an order, but I’m still happy with my rankings.

Warren Wolf ’s Christmas Vibes is primarily chill jazz tunes, with mega Vince Guaraldi Trio vibes. If you like jazz, you will like this album. And doesn’t everyone like jazz at Christmas time? Standout track(s): “O Christmas Tree,” “Have Yourself a Merry Little Christmas,” “You’re a Mean One, Mr. Grinch.” 4/5 stars.

This is where I would have talked about Leslie Odom Jr’s The Christmas Album, if I hadn’t discovered how outspokenly he supports Sia’s ableism. Don’t know what I’m talking about? Look up the controversy surrounding Sia’s Music, and then do not watch the movie Music.

Despite the title of Straight No Chaser’s Social Christmasing being so topical it’s almost cringey, this is a lighthearted, humorous, and sometimes even beautiful album. Standout track(s): “The First Noel,” “Holly Jolly Christmas,” “O Come, O Come Emmanuel/O Come All Ye Faithful.” 4/5 stars.

Meghan Trainor’s A Very Trainor Christmas, for lack of a better word, slaps. The album loses steam towards the end, but her original Christmas songs are fantastic and way too much fun. Standout track(s): “My Kind of Present, “I Believe in Santa,” “Holidays” (FEATURING EARTH, WIND & FIRE). 4/5 stars.

Okay, this one is just silly: Starkid’s A VHS Christmas Carol tells the story of A Christmas Carol through original songs all stylized after different prominent 80’s artists, and it is fantastic. Standout track(s): “3 Spirits,” “I’m the Ghost,” “Christmas Electricity.” 4.25/5 stars.

If you think that If The Fates Allow (A Hadestown Holiday Album) would only appeal to fans of the musical Hadestown, you would be wrong. This album has a fantastic, laid back yet fun vibe, and features the best arrangement of “Blue Christmas” I’ve ever heard. Standout track(s): “Thank God it’s Christmas,” “Sleigh Ride,” “Blue Christmas,” “Winter Song.” 4.25/5 stars.

A Tori Kelly Christmas features one of the few good versions of my least favourite Christmas song, “Silent Night,” and that’s really all I need to say about this album other than to do yourself a favour and listen to it! Standout track(s): “Silent Night,” “25th,” “Gift That Keeps on Giving.” 4.5/5 stars.

I never expected to like this album as much as I did, but the number one spot has to go to Dolly Parton’s A Holly Dolly Christmas. It fully leans into its cheesiness and silliness, it has some phenomenal duets, it makes me happy, and it reminds me why I love Christmas music so much to begin with. Standout track(s): “Holly Jolly Christmas,” “Cuddle Up and Cozy Down” (featuring Michael Bublé), “Christmas on the Square,” “I Saw Mommy Kissing Santa Claus.” 4.75/5 (but only because I cannot give an album with Billy Ray Cyrus on it 5/5 in good faith).

I have to give an honourable mention to Sam Smith’s EP The Holly & The Ivy. It is only an EP, and only a “Christmas” EP in the loosest sense of the term, but I love everything that Sam Smith has ever done and I absolutely adore this, especially their original track “The Lighthouse Keeper,” so I highly recommend checking it out. I know that there are probably many new releases from this year that I missed, and I am sorry if I skipped over one of your favourites, but I hope that these albums come in handy the next time you need a little Holiday cheer.