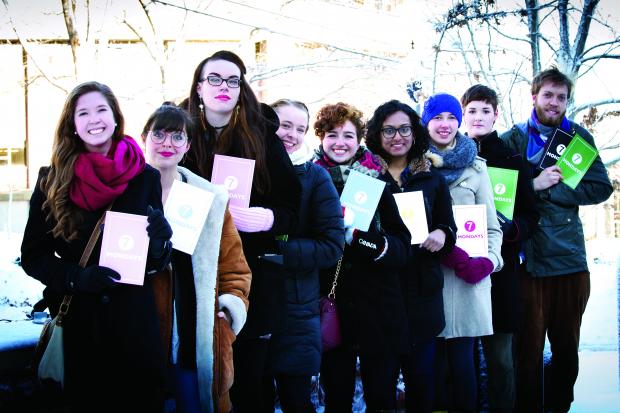 In an attempt to accent the political aspects of Mount Allison’s poetry scene, 7 Mondays will host a spoken-word event in collaboration with the Centre for International Studies.

“It’s going to be focused on both local and global injustices, but it’s pretty open thematically because that does encompass a lot of territory,” said Haley Shaw, the current Editor-in-Chief of 7 Mondays.

The reading will feature guest performances by Professors Ardath Whynacht from Mount Allison’s department of Sociology and Juan Sanchez from the Modern Languages and Literatures department. The event will be held near the end of January, though a date and location have yet to be confirmed. Students wishing to perform are invited to bring a piece of prose or poetry, either their own or that of another author.

Shaw hopes that the upcoming event will attract interest from students of various disciplines. “It’s definitely an interdisciplinary event, which I think is really important, especially at a university that offers a lot of different disciplines of study,” said Shaw.

Prior to the event, 7 Mondays hopes to host an instructive workshop about spoken word poetry. This will allow prospective participants to learn more about spoken word style and delivery, as well as provide an opportunity to practice before performing. 7 Mondays is currently accepting student submissions of poetry, short prose, scripts and essays which, if selected, would be published in this year’s issue. Photographic submissions are also accepted through Fine Arts department head Thaddeus Holownia.

“We’re pretty open with what we publish,” said Shaw. “We are looking for quality, but we’re not The New Yorker. We don’t have super lofty ideals.”

In the event that a piece is not accepted, Shaw said, editors are happy to offer critique and advice to students who request it.

“To students who aren’t ready to submit their work to a larger publication, or who aren’t sure of how their work would be received, or someone who just wrote something that they really like and want to share with the community, we offer a pretty friendly environment,” said Shaw.

This year’s 7 Mondays is the 21st volume, and Shaw says that one of the special things about the journal is its history.

“It was created by Mount Allison students to fill a gap that they had felt, before there really was creative writing offered as a class by the school,” said Shaw. “There were student writers who wanted to share their work with the community, and with each other, and didn’t have an outlet for that. So 7 Mondays was created for that need.”

She added that the journal offers student writers and editors an opportunity to learn what publishing is really like.

“You get a chance to have your work published and you get to hold a physical volume in your hands that has your work,” said Shaw.

In the wake of a referendum last year in which students voted to continue funding a $3 levy for the journal – a referendum which nearly did not pass – Shaw commented on the significance of 7 Mondays and its impact on the Mount Allison community.

“[The levy] enables us to publish the journal and to spread it throughout campus,” said Shaw, “so that everyone can submit their poetry and have it published and distributed at no [additional] cost.”

Finally, Shaw said 7 Mondays allows the Sackville community to discover and engage with local writers and develop an appreciation for Canadian talent.

“A lot of focus in English literature is on poets and writers who are dead, or poets and writers from another country who you will never have a chance to meet,” Shaw explained. “Everybody knows Shakespeare’s work, but it’s something that’s very remote from us as a community and as a society here in Canada.”

Students have until Jan. 20 to submit their work to be reviewed and possibly published in this year’s 7 Mondays. Submissions can be emailed to [email protected].