‘A Vital Force’ in Canadian history 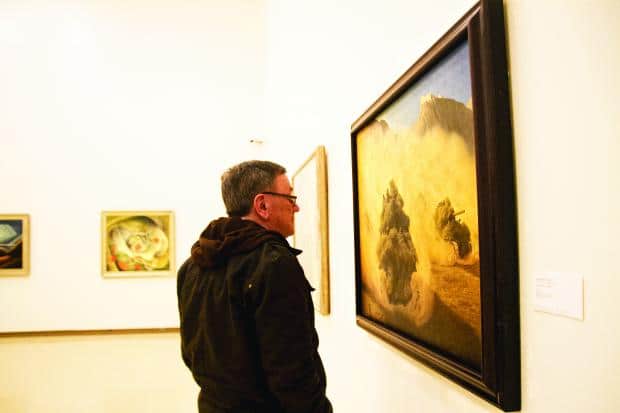 For many, the term ‘Canadian art’ is more or less synonymous with the Group of Seven. The group’s famed landscape paintings have become the face of Canadian culture in the twentieth century, and are still considered to be some of the country’s most important works of art.

However, the Owens Art Gallery’s newest exhibition “A Vital Force: The Canadian Group of Painters” challenges this idea, by turning the spotlight onto a different group of painters.

The exhibition, curated by Alicia Boutlier from the Agnes Etherington Art Centre, brings together forty-eight works by forty-eight members of the Canadian Group of Painters (CGP). This is the first major exhibition to focus exclusively on the seminal group of artists. The title, “A Vital Force,” signifies not only the group’s artistic relevance, but also their role in the formation of a Canadian cultural identity.

The CGP was formed in 1933, during a time of social and political change in Canada. The Group of Seven had recently disbanded, and the political landscape was wrought with the competing capitalist, communist, and fascist ideologies. Unlike the Group of Seven, this group of artists hailed from all over the country, and included influential female members. Their aim was to expand upon the traditions established by the famous Group of Seven, while creating a more holistic and inclusive body of Canadian artwork that better reflected the cultural zeitgeist. The CGP represented modernist themes in art, turning an eye toward human subject matter and political concerns.

As Canadian studies professor Bart Vautour noted in his opening remarks, the group was formed out of a principle of generosity that valued collective artistic practice over individual stylistic concerns. The political turmoil of the twenty-first century made it essential for these artists to work together in order to represent new Canadian culture.

“Artists who had previously squabbled in artistic ways over form, content, genre, and generational differences were now willing to adopt the model of a collective artistic organization,” Vautour said. “Nowhere do we see an affiliation across generations and style as prevalently as in the [CGP].”

These artistic differences were highly apparent throughout the exhibition. Despite their categorical curation, the paintings feature no definitive cohesion of style or subject matter. This is perhaps the most interesting, yet the most puzzling, part of the exhibition. The works range from impressionistic scenes of the Canadian pastoral landscape, to abstract expressionism, to realist portraiture, and political protest scenes. Even when the subject matter is similar, the styles are often drastically different. Without the explicit grouping of these works, most viewers would be hard pressed to identify the commonality between the paintings.

But this fragmentation of style is wholly representative of the cultural milieu of the CGP’s heyday. Canadian modern artists were striving to piece together a new Canadian identity and aesthetic. Caught in the transition between a colonial past and an independent, industrializing present, artists attempted to reconcile these two identities through cultural production.

One of the fathers of Canadian modernist poetry, A.J.M. Smith, believed this identity should be formed by a union between the “native” and the “cosmopolitan,” the local and the international. This philosophy manifests itself visually throughout the exhibition, as many of the paintings borrow American and European techniques, like French impressionism and German expressionism, but incorporate distinctly Canadian figures and landscapes.

This trend of cultural diversity and borrowing persists in Canadian art today, and is perhaps our most defining characteristic. But rather than create a tension or competition between the various artistic styles, the collective work of the CGP identifies a certain harmony among the pieces. The paintings in the exhibition aren’t contradictory, but are rather complementary in their differences.

As is frequently the case, by looking to the past, we’re forced to reflect on the present.

“Let’s ask ourselves what we can learn, both organizationally and aesthetically, from a founding principle of generosity,” Vautour said.

What we can learn from “A Vital Force” is that neither history nor art is created in isolation. Canadian culture has been, and continues to be, a collective undertaking that accepts and celebrates diversity and political consciousness. The exhibition gives viewers a rare look into Canadian history, and illustrates the CGP’s enormous contribution to the creation of a national cultural identity.

“A Vital Force” is organized and circulated by the Agnes Etherington Art Centre and Queen’s University, in partnership with The Robert McLaughlin Gallery. The exhibition will be on display at the Owens Art Gallery until June 1.