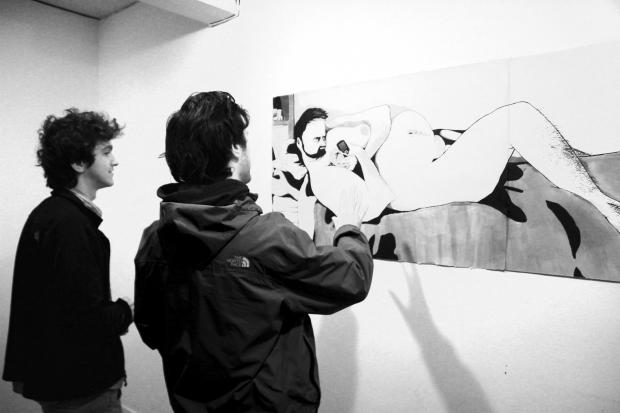 Third-year fine arts student Alex Francheville brought his work to the student-run START Gallery, and quite ironically, “I Just Can’t” proved to be everything I could ask for from an art exhibition.

Concentrated towards the back of the gallery, the visitors remained condensed, creating a warm, informal and welcoming atmosphere at the Nov. 22 gathering. There seemed to be a striking contrast between the displayed pieces and the atmosphere that reigned throughout the evening. While Francheville’s  work featured quite heavy subject matters, the event’s laid back and humorous mood contradicted the themes espoused in his artwork. A black piece of construction paper reading “only Alpine :P” written in crude white paint placed on top of the freezer set the informal and amusing tone of the evening. Visitors were about to make an incursion into Francheville’s own world in a very personal, yet familiar fashion.

Francheville’s exhibition was a beautifully orchestrated amalgamation of pieces ranging from his first year at Mount Allison until this year’s fall term. “I’ve definitely stayed fairly consistent [throughout this period],” Francheville said. “I’ve been working in the same type of thought process for a while.” The subject matter was quite unique: coming from Moncton, his hometown was omnipresent throughout his exhibition, and his themes were depicted through images of familiar Moncton landmarks.

Bernice McNaughton, Francheville’s high school, was subtly featured, and Champlain Place was depicted in a full-blown, extremely detailed drawing of the food court and its inhabitants.

“It’s really personal – it’s all from my own standpoint. […] It’s kind of an immersion into my own world,” Francheville said. “[Because of this] region and social demographics become really important,” he added. “Even though most of the things are made up, they’re all based off my own world.”

A self-portrait depicting him as a hairy, obese, and naked man sporting a singular breast, laying in bed and clutching onto his cell phone and wallet embodies the idea of being able to depict things very honestly, leaning into the grotesque, angsty and insecure corners of his reality.

“I think I have a fairly pessimistic view on a lot of things,”Francheville said. Despite this, he underlined how much he “enjoys the idea of finding beauty in something grotesque and ugly—not changing it to beautify it but showing it in a way where you sympathize with something that you normally wouldn’t be presented.”

The artist used techniques that seemed to fall directly in line with the themes explored: ripped pieces of cardboard and loose leaf were quite often used as canvases.

“I like the idea of dropping the value of what you’re working on and not holding any value other than basic aesthetic values of it – just it being a drawing and not worrying about formalities. I’m more interested in making art than setting out time and having some ‘done right’. […] The supports or what materials it’s made with are completely secondary to the image,” noted Francheville.

Alex Francheville’s work is not something that directly struck me with a clear-cut, defined meaning: it is something that I had to digest and take the time to reflect on. Furthermore, Francheville’s ability to transpose his own reality and internal struggles into his work and subsequently creating something that caters to a broader audience and something to which an outsider can relate is absolutely fantastic. Francheville doesn’t anticipate having another exhibition until he has a new collection of work, but needless to say, I shall be waiting impatiently.