Art show celebrates the end of a well-worn studio 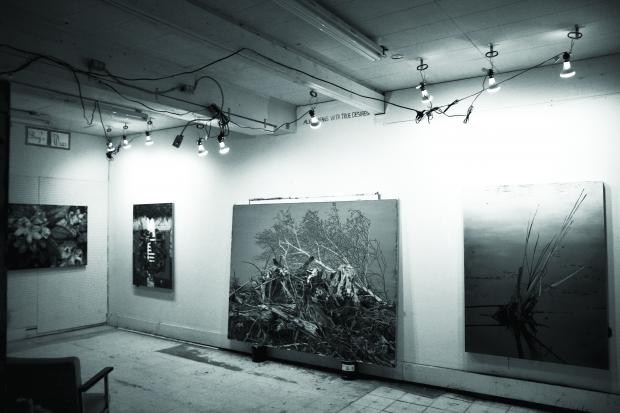 One last hurrah for Claytor and Down’s Lorne Street studio.

Wind howled at over 100 km/h last Wednesday evening, but still a crowd filled the studio on 25 Lorne Street.

“I asked Jon if he wanted to cancel, he replied ‘no retreat, no surrender.’ I was surprised that so many people showed up despite the storm,” Chris Down said.

He and Jon Claytor had been using the space as a studio, but now they have bade their goodbyes with a celebratory art showing. The event also featured performances by Lucas Hicks, Jon Mckiel, and had a unique surprise led by Amy Siegel and Kevin Brasier.

Once a hardware store, the building became a multiuse space when it was rented out by Jon Claytor and Kallie Garcia in 2010. Claytor used it as an on-and-off studio while it took turns as the Little Armadillo Print Shop, the site of various camps, workshops, and events, and artist studios. Down started renting the space in 2011 and has been working there ever since.

Claytor decided to let go of the space when it became too much to maintain.

“I was just ready for a change and with two small children at home during the day I realized I could get more work done working at home.”

It was the move that sparked Claytor’s idea for a show.

“When I decided to move out of the space, I realized it would be the perfect place for a show. And it would motivate me to clean up and pack up,” he said. He noted that he also wanted to have a last hurrah with studio partner Down. “We had been sharing the space for some time and it made sense to do something together.”

Bundled up, some even sporting skis or snowshoes, a respectable audience made it out to the event.

Claytor showed large oil paintings, half of which are recent works for an upcoming exhibition in Halifax. Dramatically lit from below, the works featured portraits of animals and humans.

“They are all about confusing the line between beauty and ugliness, grace and ineptitude, dark and light, abstraction and representation. The combination of things done well and things done badly,” Claytor said.

At the back of the building, Down showed a series of oil paintings from a body of work called dust before the autumn. The paintings were based off of photographs taken around Sackville.

“I’m trying to get images of very ordinary things, in dialogue with the physical material of paint and the various ways it is applied, to work metaphorically, to point at something that I am trying to understand about my experience of the world,” Down said. “Hopefully, the work will be able to evoke similar feelings and questions for people who see the paintings.” Down will also show work in an exhibition next spring.

The festivities started with a short acoustic set from Hicks. The set was followed by a story about the silent communication of elephants from Siegel. With an unexpected turn, a painting was removed to reveal a secret room. The audience was directed to hum together and enter the room as Brasier played a haunting organ melody, channelling the unification of the elephants. A hard act to follow, Mckiel was practically a one-man-band on vocals, guitar, and drums with Brasier accompanying on bass. Other surprises that night included a smoke machine and mini half-pipe which was tested out near the end of the evening. Altogether, the event was definitely worth braving the storm.

Claytor will work from home, and Down from his office/studio in Hart Hall for the time being. Despite his departure, Claytor hopes someone else is able to take over 25 Lorne to use it as artist studios.