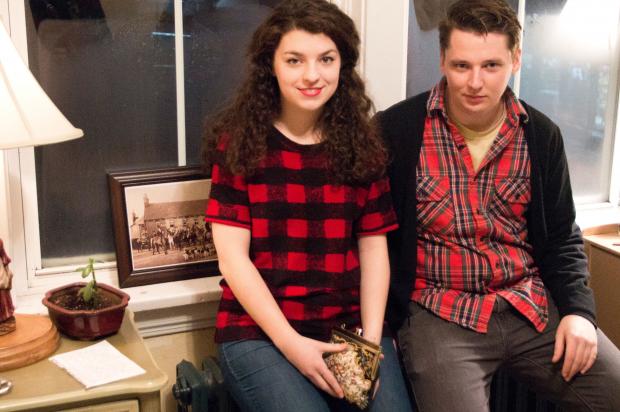 Mercier and Theriault play with culture and memory.

In their recent exhibition entitled My father was/is an Acadian man, local artists Lisa Theriault and Phil Mercier explored their Acadian heritage through painting, photography and a collection of various items.

Theriault, who graduated from the Mount Allison fine arts program last spring, and Mercier, a second year fine arts student, had each been individually exploring their family roots in connection with their fathers’ traditions.

“Phil was working on photos and I was working on watercolours, and we had talked about wanting to do a show together,” Theriault said. “We noticed that what we were working on had a lot of similarities, so we thought it had made sense to have a show and work on it together.”

Mercier’s family is from New Brunswick, and Theriault has roots in Prince Edward Island and Nova Scotia. In response to this, their exhibition presented a general view of Maritime and Acadian traditions. The artists hoped Maritimers could view the exhibits and be able to recognize their cultural motifs.

Theriault’s paintings, though simple and minimalist in style, spoke volumes about her Acadian heritage, parts of which have been lost through the generations. For example, she said nobody in her immediate family speaks French despite their Acadian roots.

“It’s been passed down but also lost,” Theriault said, explaining the use of “was/is” in the exhibition’s title.

Mercier’s photos focused on his grandfather’s hunting camp, where he and other family members would go to chop wood for the winter and hunt for food. An axe, propped up against the wall underneath his photos, further emphasized the significance of the hunting camp for his family.

The exhibition, which was on display above Thunder & Lightning on Jan. 30 and 31, occupied a single small room. Mercier’s black-and-white photographs took up two walls, and Theriault’s watercolour paintings took up another. Up against the fourth wall was a collaborative installation made up of two desks, each displaying objects with which each artist had a personal connection.

Theriault’s desk featured an old photograph of a hotel, which had been a reference piece for one of the paintings on display. A frog ornament was placed on the desk to represent her father’s love of frogs.

The desk also included a note, handwritten by Theriault, which spoke of the loss of Acadian tradition on her father’s side of the family.

“I think he likes things like that to connect to his heritage, which he somewhat lost,” the note said. “Both his parents spoke French, but it never caught on with their children.”

Mercier’s desk displayed objects which he had collected from his grandfather’s hunting camp over time, such as feathers, spent rifle cartridges and other hunting paraphernalia. Each desk also had a lamp, both of which were donated by Mercier’s parents.

Adding to the cultural elements in the art pieces themselves, homemade traditional Acadian treats, like pets de soeurs, were offered at the exhibit’s opening. Taken together, non-Acadians could enjoy elements of another culture while appreciating the traditions that made these pieces possible.