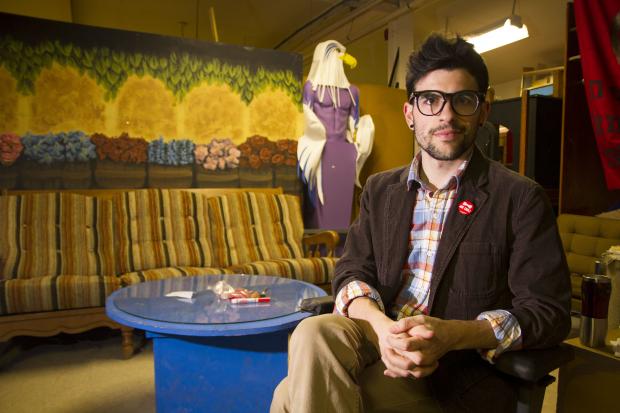 Fourth-year drama student Gregory McLaughlin is all about experimentation with a broad range of theatre styles, even if it means delving into the dramatic traditions of Ancient Greece. His current project, an adaptation of the Greek comedy The Clouds by Aristophanes, combines an interest in Classical art, a love of humour, and a passion for critical commentary and engagement through literature.

Under the mentorship of Glen Nichols, the director of Mount Allison’s drama program, McLaughlin has been pursuing an independent study course in Greek theatre direction. The project will culminate in a production of the play next month, and will be performed alongside a similar project on Greek tragedy by fellow drama student Jake Planinc. The two share an interest in the modern adaptation of these plays, and they have worked independently and collaboratively to present an evening of back-to-back Greek classics.

McLaughlin’s goal with the adaptation is to capture the essence of Greek theatre style. “One thing that’s really important to me [is to] maintain as much of the flavour of Greek theatre as I can in this modern context,” he said.

At the same time, McLaughlin has worked extensively with the script to ensure that the comedic aspects of the play are kept intact, and many of the references have been updated to suit current events. Because the original Aristophanes play criticizes and parodies many aspects of Greek society and academic communities during the time of its composition, McLaughlin has attempted to maintain this element by bringing the social commentary into the present.

“Part of my project last semester was to go through and update all of those jokes and references for a modern audience,” says McLaughlin. “I think it’s going to be much more accessible in that sense. It’s really a balance of old and new.”

Many of these reconfigurations have evolved into a light-hearted critique of Mt. A’s drama program, including McLaughlin’s own mentor for the project. “One of my favourite jokes in the whole play makes fun of the head of my program; he thought it was hilarious.”

McLaughlin wants the satirical messages of the production to come through and encourage political engagement as a result of the issues addressed within the play. “It’s my hope that you’ll leave this show with strong feelings about it. Whether they are positive feelings or negative feelings, my hope is to leave an impact.”

Another major modification to the script is the parabasis, a section within the play wherein the plot is briefly abandoned in order for the audience to be addressed directly, in the playwright’s own voice.

“It’s an odd opportunity for the playwright in Ancient Greece to say whatever they want about anything,” he describes. McLaughlin himself has opted to act this scene himself, using the digression to playfully express his own opinions on education and the drama community at Mt. A. “It’s my chance as a playwright to air some frustrations,” he says, likening the process to a “roast” of the drama program and even himself as a director. “I get made fun of as well, that’s part of the humour—no one is safe.”

The production features nearly ten actors in total, most of which are first-year students or newcomers to theatre productions at Mount Allison. This casting decision is a deliberate one, as McLaughlin himself is reminded of his own theatrical beginnings. “The majority of my cast are first-time or relatively new actors,” says McLaughlin. “I got my very first show here because a fourth-year director wanted to give the opportunity to newer students, and that really impacted me.”

After graduating from Mount Allison this coming spring, McLaughlin will be pursuing his primary interest in stage management by working as an apprentice for Ship’s Company Theatre in Parrsboro, Nova Scotia. He will then move to Halifax to work as a stage manager for a production of Don Hannah’s The Cave Painter, to be performed next February. McLaughlin says he enjoys the “huge responsibility” of being a stage manager: “It’s an extremely demanding job, but it’s one I really enjoy,” he explains. “There’s something really rewarding about […] organizing a successful rehearsal.”

McLaughlin is excited for the upcoming production, and believes that his choice to experiment with Greek theatre traditions will be a delightful change for the audience. “They are absolutely in for some laughs,” says McLaughlin, enthusiastic about his extensive work on the project. “I think people can look forward to a really interesting, exciting, and different theatre experience.”

Because of schedule reorganizations in the wake of the recent strike, the dates for “An Evening of Greek Theatre” are currently tentative, but the event will likely take place on the last weekend of March or the first weekend of April.