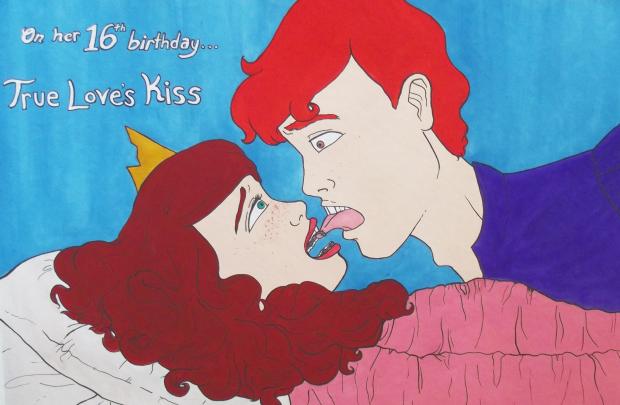 What if the Disney fairy tales we know and love featured very different characters than the ones we’ve encountered, like a chubby princess with a big nose, or two princes who fell in love? How would our ideas about society change? These are the questions fourth year fine arts student Ruthie Payzant wants to answer through her art practice.

Payzant, primarily an illustrator, is currently working on projects that re-vision the traditional fairy tale. She is in the process of writing and illustrating an original, modern day children’s story meant to reflect themes of tolerance and self-acceptance. She is also simultaneously researching the history of the fairy tales we know today, and using that information in a separate project, wherein she then traces the evolution of fairy tales, both stylistically and morally, through her artwork.

As someone who grew up loving Disney princesses and folk tales, the artist now recognizes problems in the classical narratives that she wishes to change.

“I want to draw attention to the issues with the fairy tales and our culture’s representation of it. I want to update it by addressing issues like body image and sexuality. I think the genre has gotten out of date,” said Payzant.

She adds that fairy tales effectively convey life lessons because they change the way people think at an early age.

Introducing methods of conduct and ideology through fairy tales isn’t a new practice. Payzant has been avidly researching original versions of fairy tales, and notes that most of the earlier stories dictated how women ought to act and present themselves in society. She found that in tales by the Grimm Brothers specifically, women were represented as passive, domestic creatures, and that any other method of conduct was viewed as unacceptable.

Payzant instead uses her own fiction and illustrations as a pedagogical mouthpiece for more progressive and empowering ideas. This feminist angle of re-working classical fairy tales represents a long awaited change in the modern entertainment industry. Payzant hopes that her work will help bring that shift in ideology to the forefront of contemporary culture.

“Young girls growing up face so much pressure. I’d like to say, ‘look at this princess, she’s got a big nose and she’s a little chubby, but she’s still beautiful!’ The younger we introduce these things, the easier it is to accept them growing up,” Payzant said.

The fourth year student, who will graduate in May, plans to pursue a career in design and illustration and hopes to work with large companies like Disney, Pixar, or Dreamworks.