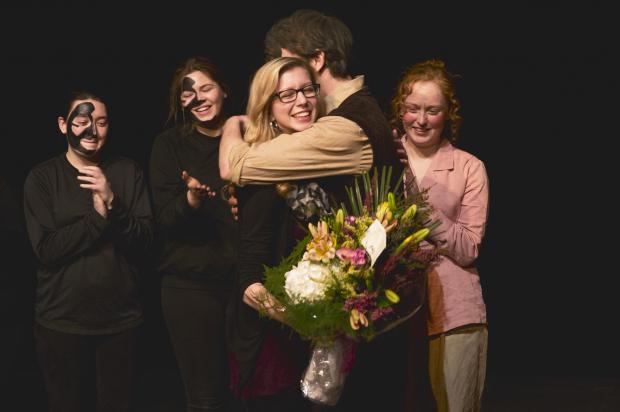 When fourth-year Mount Allison drama student Samantha Bixby was four years old, her grandfather was involved in a car accident which left him quadriplegic. Last week, she brought his story to the Motyer-Fancy Theatre stage with a play called Skipper, which she jointly directed with Cordula Quint.

Bixby wrote the play throughout her independent study course in drama this past year.

“I’ve always been interested in doing something with this story, because it’s actually in book form,” said Bixby.

Her grandfather, Ed Smith, wrote an acclaimed memoir entitled From the Ashes of My Dreams, which tells the story of his accident and his 17-month rehabilitation process.

Bixby told the story of the accident in detail, starting with the fact that it is not an uncomfortable story to tell.

“I was so young that I don’t remember the trauma. I have a few memories of him walking, but it doesn’t bother me at all,” she said.

Bixby’s grandfather, Ed (whom she affectionately calls Skipper, that nickname being the source of the play’s title), along with her grandmother and aunt, were driving one night when they lost control of the vehicle on a patch of black ice. Ed was lying across the back seat of the car due to back problems, and he was thrown out the window when the car flipped over.

Because it happened when she was four years old, Bixby interviewed her family members to help fill in her memories of the accident and assist her in the process of writing the play.

“It kind of turned the play into a memory play,” she said.

To make the story more accessible to a general audience, Bixby took several artistic liberties with details of the story and characters. In the car accident scene, for example, she showed Ed sitting in the front seat of the car rather than lying in the back.

Furthermore, the character representing Bixby switched back and forth between two versions of herself: a child version and an adult version, the latter of which leads the audience through the story from her perspective. Rebecca Lawrence, the third-year student who played Bixby, had to behave very childish for most of the play, which Bixby said was uncharacteristic of her in real life.

Finally, to add theatricality, Bixby directed movement scenes in which actors played the role of Shadows, representing Ed’s anxieties during the rehabilitation period.

“I took the idea that Skipper would have the worst time dealing with things at night, and he would have nightmares, and he would think about all the things that he couldn’t do anymore. And that’s when he was the most bothered – when he was alone in his hospital room,” said Bixby.

Bixby’s family, including Skipper himself, came to see the play on Thursday night. She said they were honoured and proud of her.

When asked about the play’s primary message, Bixby said, “Value your family, because they can help you get through anything. Skipper is just as happy as ever today, and we’re just a normal family.”