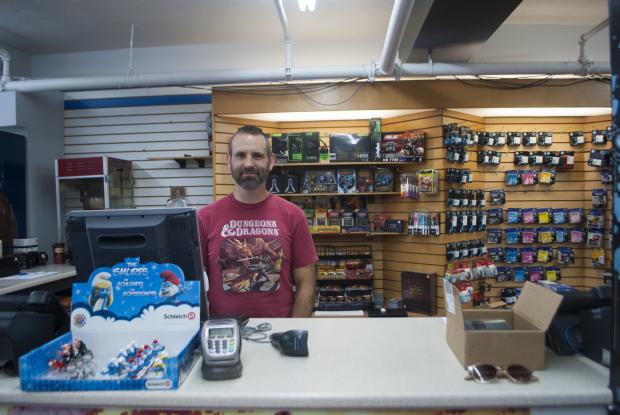 On Saturday, Black Bowser Comics participated in its second annual Halloween Comicsfest. To celebrate the holiday that comics have so often been associated with, perhaps due in part to their preoccupation with the darkly supernatural and, inversely, their association with children, Black Bowser gave away free comics, hosted a costume contest, held a Magic: The Gathering demonstration, and sold many titles at reduced prices on October 26. The store participated as part of a larger international effort by Diamond Comic Distributors, the world’s largest English comic distributor.

Andrew Black and Tom Bowser, the co-owners of the store, participated in the event, and made their own unique additions, as an initiative to attract new readers. Although the distribution of free special edition comics is part of the international effort, the Magic: The Gathering demonstration, which included a free deck for all those who participated, was unique to Black Bowser. The pair hopes to see the already strong Magic community in Sackville grow with initiatives like this.

Although Black and Bowser started the shop with modest ambitions, Black said that the pair was “surprised at the success of the shop, not just monetarily, but with regard to the support they receive from both the town and the university.” Black Bowser is the fourth comic shop in Sackville’s history and has lasted the longest thus far. The owners have noticed an increased knowledge of comics in general, as they shift from what was once a niche interest to the mainstream. The pair plans on expanding their business and interaction with the community, with initiatives such as their Graphic Novel Book Club, the inclusion of more toys, collectibles, and children’s programs.

Black and Bowser mentioned that Brian K. Vaughan’s Saga is currently one of their most popular sellers, along with Superior Spiderman, a title that Marvel launched a year ago, in the superhero department. Additionally, many customers come in for trades, merchandise, and toys of titles like Robert Kirkman’s immensely popular Walking Dead, which has been adapted into a hit AMC series. The recent pop culture obsession with adapting comic books into television and film has certainly spurred this interest, and benefited long-time fans, new converts, and owners of shops like Black Bowser.